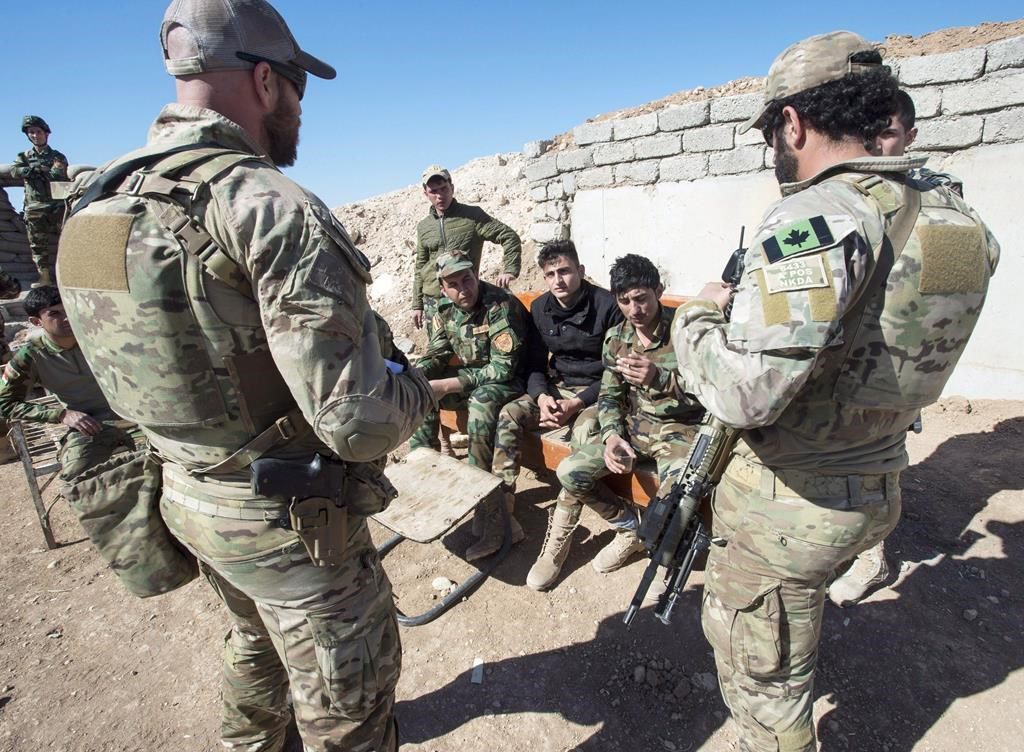 OTTAWA — A secret memo has emerged showing that Canada’s top military commander was warned last year that the vetting of Iraqi security forces associated with a Canadian-led training mission in the country lacked “sufficient depth.”

Obtained by The Canadian Press through the access-to-information law, the memo follows allegations the military turned a blind eye on a complaint three years ago that some Iraqi forces being trained by Canadian troops may have committed war crimes.

Military spokeswoman Maj. Melina Archambault says the heavily redacted memo is not related to that incident in September 2018, but instead deals with potential concerns around transferring prisoners to Iraqi forces.

Marked “secret” and for Canadian Eyes only, the memo is dated Jan. 16, 2020 and was written by Lt.-Gen. Mike Rouleau, who at the time was the commander of the Canadian Joint Operations Command and responsible for overseeing all military missions.

Rouleau told Vance that in August 2019, the head of Canada’s anti-Islamic State mission was tasked with “identifying and vetting” certain elements of the Iraqi security forces. Rouleau added a reference to “adhering to our obligations in international and Canadian law.”

The vetting was being done in the context of a NATO training mission that at the time was being led by Canadian Lt.-Gen. Jennie Carignan and involved around 250 troops from Canada.

Rouleau wrote that “the depth of analysis corresponded to the probability that our force would work with that ISF element,” adding: “While the vetting was professional and of good quality, as expected it lacked the sufficient depth required.”

Archambault said measures were taken to address the concerns identified by Rouleau, though she declined to discuss them for security reasons. Canadian troops did not take any prisoners while participating in the training mission, she added.

“Of note, the (NATO training mission) vetting process is owned by NATO,” she said, “and as a key contributor, the CAF seeks to ensure the thoroughness of this process for the safety of its deployed members and partners, and legal obligations.”

For his part, Rouleau added a handwritten notation to Vance saying the memo was “designed to give you confidence that we are constantly scanning the risk environment — mitigating where we can.”

The memo’s emergence comes amid questions about the screening of Iraqi troops trained by Canada and military officials’ repeated assurances over the years that Canadian troops in Iraq have not witnessed war crimes or human rights violations.

Military police are currently investigating the handling of an incident in September 2018, where Canadian soldiers were helping with the enrolment of 270 Iraqi troops for a U.S.-led training mission near the northern city of Mosul.

An internal report obtained by The Canadian Press and first reported on by Postmedia says the Canadians were shown videos of war crimes and human rights violations being perpetrated by the Iraqi troops they were there to train.

The videos purportedly included a woman being raped to death as well as the torture and execution of prisoners.

Yet when the Canadians raised the issue with their commanders, according to the report, they were the matter would be dealt and that they were to ignore the videos and “carry on.”

One of the soldiers involved said he tried to raise the issue with his commanders on three different occasions, but that he and other members of his unit “remain uncertain whether appropriate action was effectively taken.”

“I am an ethical man and I believe in our moral doctrine and the (Law of Armed Conflict),” added the soldier, who wrote about having been traumatized by the experience.

“I have thought about this incident every day since the event took place. I am bothered by the fact that my assigned duties allowed me to train and enable people who in my mind were criminals.”

Acting defence chief Lt.-Gen. Wayne Eyre told CBC News over the weekend that he was unaware of the allegation and Defence Minister Harjit Sajjan on Monday confirmed the allegations were currently being investigated by military police.