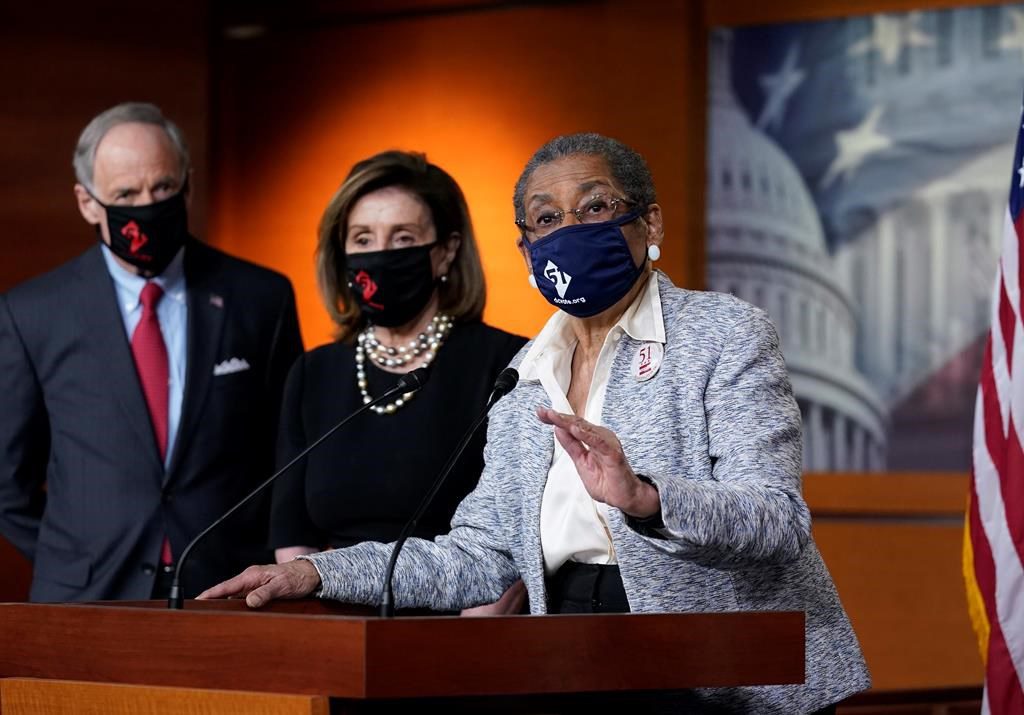 WASHINGTON â€” A decades-long movement to reshape the American political map took a further step Thursday as the House of Representatives approved a bill to make the nation’s capital the 51st state.

Approval came by a 216-208 vote along strict party lines. Republicans oppose the idea given that the new state would be overwhelmingly Democratic â€” and the proposal faces a far tougher road in the Senate, where even full Democratic support isn’t guaranteed.

The legislation proposes creating a 51st state with one representative and two senators, while a tiny sliver of land including the White House, the U.S. Capitol and the National Mall would remain as a federal district. Instead of the District of Columbia, the new state would be known as Washington, Douglass Commonwealth â€” named after famed abolitionist Frederick Douglass, who lived in Washington from 1877 until his death in 1895.

An identical statehood bill passed the House in 2020, but died in the then-Republican-controlled Senate. Now, with the 2020 elections leaving Democrats controlling both chambers of Congress and the White House, Republican senators may resort to a filibuster to stymie the statehood bill.

The Senate is split 50/50 with Vice-President Kamala Harris as the tie-breaker. But it takes 60 senators to break a concerted filibuster attempt. Senate Democrats could vote to tweak the filibuster rules and slip the statehood issue through a loophole â€” but that would require total unity and some moderate Democrats have expressed opposition to that strategy.

Perennial swing vote and Democratic Sen. Joe Manchin of West Virginia had already publicly stated that he will not vote to eliminate or weaken the filibuster. Manchin is also one of a handful of Democratic Senators who has not openly supported the D.C. statehood initiative.

For now, though, Democrats and statehood advocates are celebrating their House victory.

"This vote comes at a critical time when Americans nationwide are eager to deliver on the promise of liberty and justice for all," Bowser said in a statement. "For centuries, an incremental approach to equality in America has delayed this promise for too many. Now is the time for bold action."

"It won't withstand judicial scrutiny, but it will cause massive confusion for years as it's reviewed by the courts," Comer said in a statement. "Democrats are pushing D.C. statehood to pack the U.S. Senate with two progressive senators so they can end the filibuster, pack the Supreme Court, enact the Green New Deal, and create the socialist utopia the Squad dreams about."

The bill received strong support from the White House, which has called Washington's current status "an affront to the democratic values on which our Nation was founded."

During Thursday floor debate, a succession of Republican representatives decried it as a cynical and unconstitutional power-grab. The country’s founding fathers, “never wanted D.C. to be a state and then specifically framed the constitution to say so," said Georgia Republican Rep. Jody Hice.

But Virginia Democratic Rep. Gerald Connolly pointed out that Kentucky was once a part of Virginia, and was carved out as a state by Congress.

Connolly argued that the federal district was a theoretical concept when first conceived, not a community with a higher population than two U.S. states.

During a March hearing by the House oversight committee, GOP representatives claimed D.C. was unfit for statehood and proposed a variety of alternatives that included absolving Washingtonians from federal taxes and "retroceding" most of D.C. back into Maryland.

Opponents also contend that Congress lacks the authority to change D.C.’s status, despite every state other than the original 13 being admitted to the union via congressional vote.

Zack Smith, a legal fellow at the Heritage Institute, a conservative think-tank , said the measure becoming law would unleash a wave of lawsuits.

"You’re basically looking at a lot of litigation," Smith told The Associated Press. “Every legislative act of this new state would be called into question. … Things would be in a state of flux for years.”

D.C. has long chafed under its relationship with Congress, which has the power to essentially veto or alter any local laws. Its population is larger than that of Wyoming or Vermont and its estimated 712,000 residents pay federal taxes, vote for president and serve in the armed forces, but they have no voting representation in Congress.

The limitations of D.C.’s reality were put in stark relief last summer during a series of protests over the killing of George Floyd in Minneapolis and against general police brutality. After a night of widespread vandalism, President Donald Trump usurped D.C. Mayor Muriel Bowser's authority and called in a massive multiagency federal force to downtown. The law enforcement forces cleared peaceful protesters from a public street so Trump could pose for a photo outside a church.

Ravi Perry, head of Howard University’s political science department, said the events of last summer were a crucial turning point for the perception of the D.C. statehood push, intertwining the issue with the country’s ascendant racial justice movement. As recently as 2018, nationwide polls had shown the majority of Americans to be lukewarm at best on the topic, but those poll numbers changed dramatically in the past two years, he said.

"People have started to see D.C. statehood as the racial justice issue that it is,” said Perry, who is also on the board of the pro-statehood group D.C. Vote. "There’s been a major sea change, and a lot of that has been motivated by Trumpism."