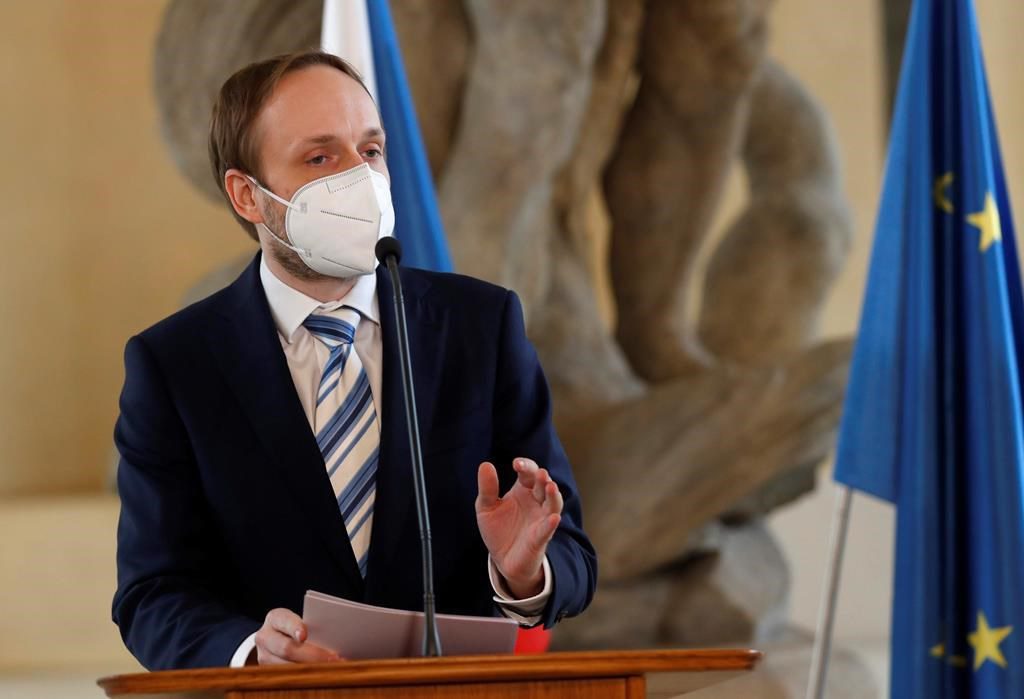 PRAGUE, Czech Republic â€” The Czech Republic on Thursday ordered 63 more Russian diplomats to leave the country, further escalating a dispute between the two nations over the alleged involvement of Russian spies in a massive ammunition depot explosion in 2014.

Foreign Minister Jakub Kulhanek said Russia won’t be allowed to have more diplomats in Prague than the Czechs currently have at their embassy in Moscow. All others have to leave by the end of May, he said.

The Czech secret services have repeatedly warned that Moscow had a disproportionately high number of diplomats at the embassy in the European Union nation, using it as a base for undercover spies.

"I don’t want to escalate anything," Kulhanek said. "It’s not a role for the foreign minister. But the Czech Republic is a self-confident country and will act accordingly."

He said the Czechs had to respond to the activities of Russian agents on Czech territory. Last weekend, the Czech government expelled 18 Russian diplomats it identified as spies from the GRU and the SVR, Russia's military and foreign intelligence services. In response, Russia expelled 20 Czech diplomats.

"It’s the Russian side that have paralyzed the situation, not the Czech side," Kulhanek said, adding Prague was ready to discuss with Moscow how to set the number of employees at their diplomatic missions "to enable their effective functioning."

“Prague has come on a path of destroying relations. We will respond quickly," Russian Foreign Ministry spokeswoman Maria Zakharova said. "They have gotten stuck in unbridled Russophobia."

Zakharova later said the Foreign Ministry summoned the Czech ambassador to denounce Prague for an "escalation of an anti-Russian campaign under the falsified pretext." She underlined that "the language of ultimatums is unacceptable."

"In response to Prague's hostile actions, we demanded to reduce the personnel of the Czech Embassy in Moscow, taking into account a significant disparity in the category of local hires," she said.

Moscow does not employ Czechs at its Prague embassy.

She added "the ambassador was told that we reserve the right for other moves in case of further escalation.”

The Czech government protested what it called Russia's "inappropriate reaction," saying the move had paralyzed the Czech Embassy in Moscow.

Czech leaders said Saturday they have evidence provided by the intelligence and security services that points to the participation of two agents from Russia’s elite GRU Unit 29155 in the 2014 depot blast that killed two people. Russia denied that.

The same two Russians were charged by British authorities in absentia in 2018 with trying to kill former Russian spy Sergei Skripal and his daughter with the Soviet-era nerve agent Novichok in the English city of Salisbury.

Kulhanek and Michal Koudelka, the head of the Czech counterintelligence service known as BIS, briefed NATO allies on the situation Thursday.

"Allies express deep concern over the destabilizing actions that Russia continues to carry out across the Euro-Atlantic area, including on alliance territory, and stand in full solidarity with the Czech Republic," they said in a statement.

Neighbouring Slovakia on Thursday became the first NATO ally to expel Russian diplomats as a sign of solidarity with the Czechs. Prime Minister Eduard Heger said three diplomats were given seven days to leave. Their expulsion was based on information from the country’s intelligence services.

"We are deeply disappointed by the unfriendly actions of Bratislava, which decided to show pseudo-solidarity with Prague on a trumped-up case,” said Zakharova, the Russian spokeswoman.

Vladimir Isachenkov and James Heintz contributed to this report from Moscow.