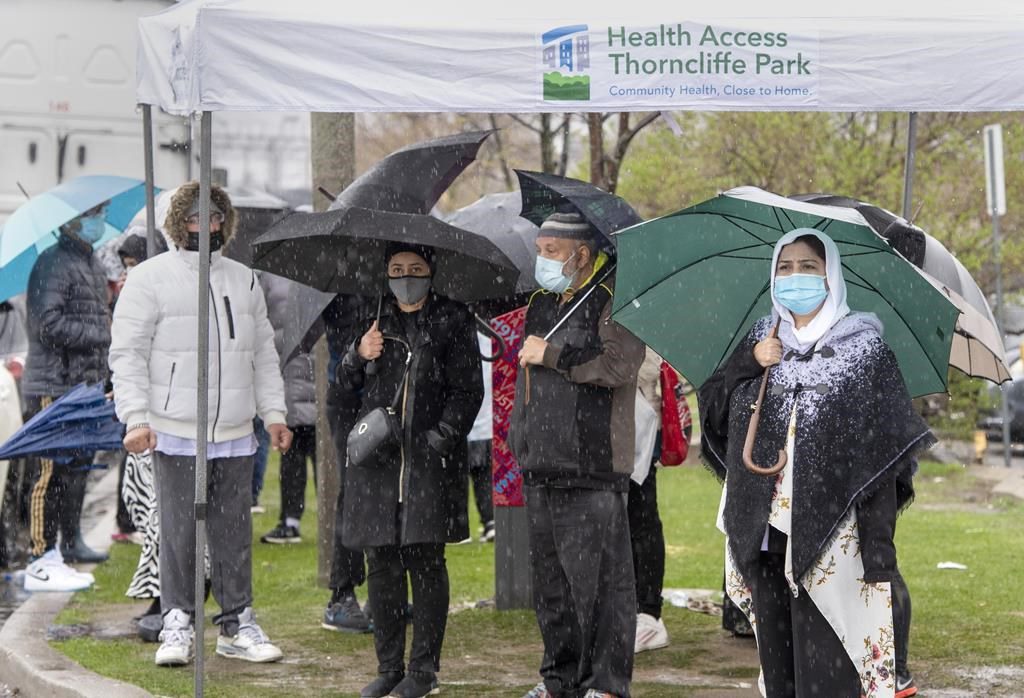 Canada’s current COVID-19 case count is nearing the height of the previous second wave, the country’s chief public health officer said Sunday as Ontario reported a single-day record for new infections and provinces brought in restrictions to contain the spread of the virus.

“With the current acceleration of COVID-19 activity, approaching the peak of the second wave, and a concerning rise in the proportion of cases that involve more contagious variants of concern, strong public health measures and individual precautions must be sustained where COVID-19 is circulating,” Dr. Theresa Tam said in a statement.

Tam said intensive care admissions across the country increased by 23 per cent over the last seven days compared to the week before, noting the spike is straining the country’s health-care system.

“These data also show that an increased number of adults in this age group were admitted to intensive care units (ICU) and received mechanical ventilation in March 2021,” her statement said.

The percentage of patients in intensive care who were aged 18 to 39 also doubled from January to March, from 7.4 per cent to 15 per cent of the total.

Tam’s statement came as Ontario reported a record 4,456 cases of COVID-19 in a 24-hour period.

The latest figures showed 21 additional deaths associated with the virus and a sharp rise of new cases in Toronto, which jumped by nearly 400 to 1,353.

Hospitalization rates in the province have been climbing steadily, prompting the province to order facilities to scale back elective surgeries starting on Monday.

A hospital at the centre of an outbreak in northwestern New Brunswick is also feeling pandemic-related strain, with seven of its nine intensive care beds filled with patients fighting COVID-19.

Local health authorities said the Edmundston Regional Hospital had 13 patients sick with the virus, with seven in intensive care and five on respirators.

Parts of the northwest were placed in lockdown as of Sunday following a recent rise in cases. In the afternoon, health authorities announced that municipal elections would be suspended in regions under lockdown, which include Edmundston, Upper-Madawaska, Lac Baker, Riviere-Verte, Sainte-Anne-de-Madawaska and Saint Leonard.

Rules are also being tightened in Quebec, where a nighttime curfew is being moved to 8 p.m. from 9:30 as of Sunday evening in Montreal and neighbouring Laval to stave off a rise in cases.

The province reported 1,535 new infections on Sunday, as well as a 25-person jump in hospitalizations — numbers the province’s health minister described as “worrisome.”

Premier Francois Legault already imposed the 8 p.m. curfew in some other hot spots including Quebec City and Gatineau, which are currently under special lockdown measures.

In British Columbia, health authorities announced they will offer vaccines to all adults living in the ski community of Whistler beginning Monday. Whistler residents account for the majority of cases in Howe Sound, which has the highest rate of COVID-19 of any local health area in the province.

Saskatchewan said it continues to set new records for the number of vaccines administered in a single day with 13,170 on Saturday.

Authorities said half of Saskatchewan residents who are 50 and older have now received their first dose, after recently expanding the provincial booking system eligibility to everyone 55 and up.

That province reported 321 new cases on Sunday, while Manitoba logged 112 and Alberta counted 1,183.

This report by The Canadian Press was first published April 11, 2020

Note to readers: This is a corrected story. A previous version said the current COVID-19 wave was approaching its peak.