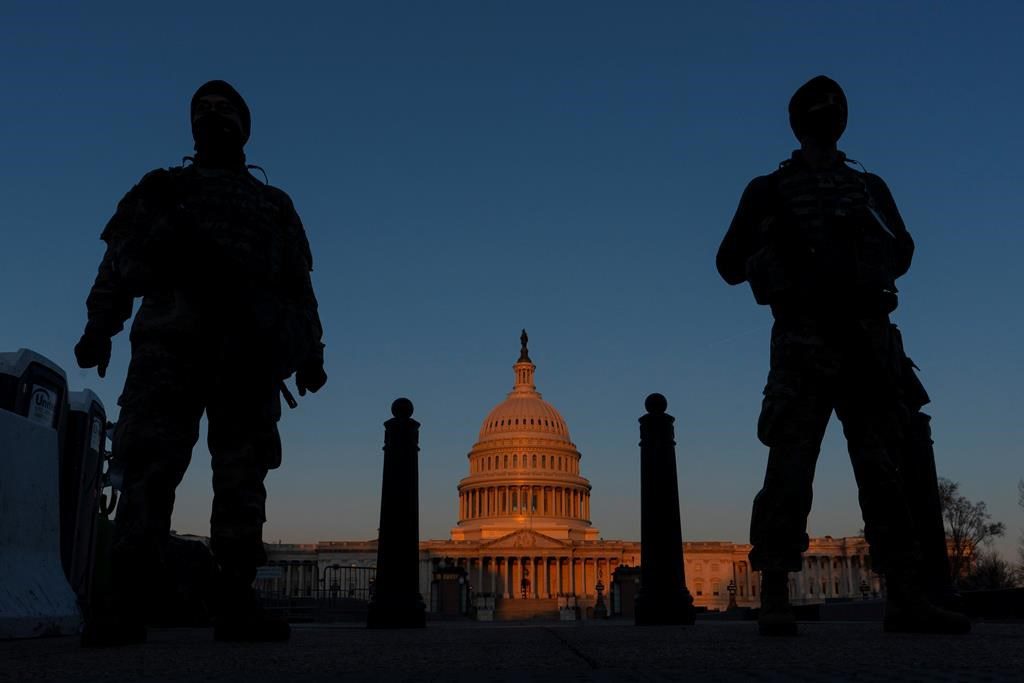 WASHINGTON â€” Can lawmakers all just listen to the president â€” even for one night?

Recent history is not assuring. Republican Rep. Joe Wilson shouted "you lie!" at President Barack Obama when he was giving a joint speech to Congress in 2009. Eleven years later, Democratic House Speaker Nancy Pelosi ripped up a copy of President Donald Trump's State of the Union speech as she stood behind him on the House rostrum.

Partisan tensions have only deepened on Capitol Hill since Pelosi's defiant act last year, which came days before the Senate acquitted Trump in his first impeachment trial. Since then, the U.S. Capitol has been through the Jan. 6 insurrection, a second impeachment of Trump and another acquittal.

Trust between the parties, and between members themselves, has cratered as Joe Biden prepares to address the House and the Senate for the first time in his presidency.

While Trump often added a reality TV star's drama to his congressional addresses, Biden â€” who has spent most of his adult life in government service â€” has the chance to play the elder statesman. Lawmakers in both parties say Wednesday's address to Congress presents an opportunity for him to push past some of the antics and anger, for a few hours at least.

"I think the tension is high, but the one person who can cool the temperature in the room is Joe Biden," especially if he reaches across the aisle, said former Rep. Tom Rooney of Florida, a Republican who retired two years ago and has expressed frustration about the decline of congressional decorum and civility.

Biden's first speech to Congress â€” called an "address to a joint session of Congress" instead of a "State of the Union," as is customary in a president's first year â€” will already be unlike any other, as attendance will be limited due to COVID-19 safety protocols.

With the House out of session for the week, many, if not most, House Republicans are expected to skip the event, increasing the chances that Biden will be speaking to a mostly friendly audience of Democrats. The Senate is in session, but some Republicans from that chamber are expected to skip as well â€” Texas Sen. John Cornyn said Monday that he’s thinking of watching the speech on TV because "it sounds like Speaker Pelosi doesn't want us to attend."

Other traditions have also been jettisoned for the address. Lawmakers can’t bring guests, removing one source of drama and speculation. Nor will there be guests of the first lady in the gallery, depriving Biden of the ability to humanize his policy proposals and manufacture feel-good moments.

Even if there is bad behaviour in the room, the White House says the president's goal is to focus on the voters outside the Capitol.

"It'll look different, but from his vantage point it still is an opportunity to speak directly to the American people," press secretary Jen Psaki told reporters Monday. "We are looking for ways to engage with the American public, whether it's through viewing parties or ways to communicate about what the president is proposing. But it won't look or feel or sound like it has in the past."

Members of the Biden team have made no secret of their strategy to bypass GOP lawmakers and seek a solid foothold of support from Republican voters. They note that their policies are generally popular, and the result, so far, appears to be less resistance from GOP supporters. An AP-NORC Center for Public Affairs poll in March found that 60% of people approve of Biden's performance on the economy, including a relatively strong 25% of Republicans. About half of Republicans approve of how Biden has handled the pandemic.

Because Biden's team believes the policies are popular, they've been more willing to invite public debate with Republicans. It can feel like a return to greater civility, even if Republicans are still grumbling about his proposals.

David Barker, director of American University's Center for Congressional and Presidential Studies, said Biden's speech may not move policy, but "it may help him with a few voters around the edges, putting Republicans in swing districts in a bit of a squeeze” to explain why they are voting against his plans.

Louisiana Rep. Steve Scalise, the No. 2 House Republican, said he plans to skip the event and give his spot to a freshman lawmaker. But "in the end, what he says is going to be important, and I hope his speech is more focused on unifying as opposed to just having a go-it-alone strategy."

Even Joe Wilson, who is still in Congress, is encouraging Biden to reach out across party lines.

"Working across the aisle is essential for Congress in order to do what is best for American families," Wilson said in a statement. He noted that he apologized to Obama's White House after his 2009 outburst and has proposed bipartisan legislation since.

Still, Wilson's words a decade ago were a harbinger of a more partisan era on Capitol Hill, which increasingly attracts politicians more concerned with fame than legislation. Rude or outspoken behaviour is often rewarded with popularity, TV appearances and fundraising dollars.

Rooney, who was elected the year before Wilson interrupted Obama's speech, said that respectfully listening to the president, no matter the party, used to be the norm. He recalled that he would follow party leaders' signals, not even standing up to clap unless they did.

"We've gone from extended standing applause to outbursts where people might be able to make news in the room themselves, and then raise money off that," Rooney said.

Rep. Jim Himes, D-Conn., said the scene on the floor can feel tense, and "you sort of wonder who's going to do what next." But he predicted this year's speech will be calmer, not only because of the reduced numbers, but because Biden is different than his predecessors.

While Trump was combative and Obama was often cerebral, Himes said, Biden connects well with others in a way that could potentially "transcend partisanship and calm tempers" in Congress.

"I honestly believe the best thing Joe Biden can do is to do what Joe Biden usually does, which is to speak from his heart," Himes said.

And his advice to colleagues? "Tone down the Oscar-winning performances.”