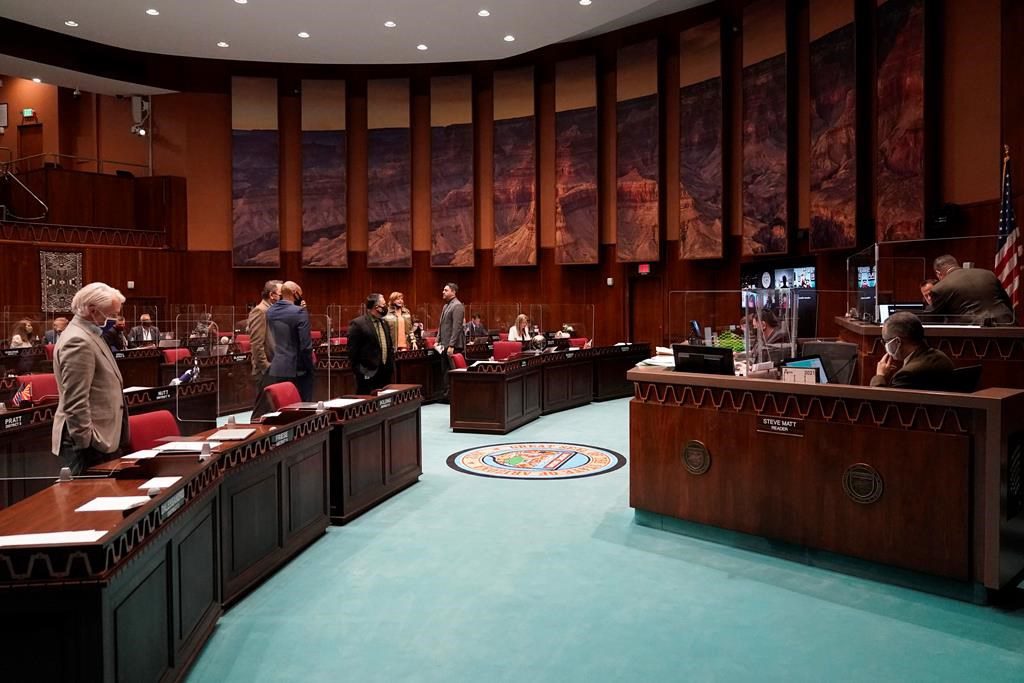 PHOENIX â€” Two years after Arizona lawmakers repealed a ban on any HIV/AIDS instruction that "promotes a homosexual lifestyle” as they faced a lawsuit, they have approved revamping the state’s sex education laws to make them some of the strictest in the nation when it comes to teaching about LGBTQ issues.

The measure pushed by a powerful social conservative group is framed as a parental rights issue and would require schools to get parents’ permission for discussions about gender identity, sexual orientation or HIV/AIDS in sex education classes.

Schools also would need parents to sign off on their children learning about historical events involving sexual orientation, such as a discussion of the modern gay rights movement that sprang from the 1969 Stonewall riots in New York.

The bill passed the Republican-controlled House on a party-line vote Wednesday, with Democrats saying it would harm LGBTQ children. It already passed the Senate and now goes to Republican Gov. Doug Ducey.

Arizona is among several Republican-led states where lawmakers are considering similar changes to sex education. Moving to give parents more control over what their children may be taught about LGBTQ issues is new and comes amid other efforts pushing back on social changes, including legislation in some states to ban transgender athletes from competing on the school teams of their identified sex, according to the Guttmacher Institute, a reproductive rights group that tracks such legislation.

Arizona is one of five states that already require parents’ permission before a child can attend sex education classes, according to the National Conference of State Legislatures. The new proposal would essentially require a double opt-in for HIV/AIDS instruction that addresses sexual orientation or gender identity. Additional permission would be needed for LGBTQ discussions in any other class.

Idaho legislation also requires notifications and opt-ins, including for discussion of sexual orientation outside of sex education classes. It has passed the House and awaits Senate action.

Lawmakers in Tennessee and Missouri are considering measures that would require parents to be notified before instruction on sexual orientation or gender identity but would exclude historical references.

In Montana, the Legislature passed a bill last week initially meant to require parents to opt in to sex education but was changed after pushback from education groups. It now allows parents to opt their children out of sex ed and awaits action by Republican Gov. Greg Gianforte.

Advocates for comprehensive sex education say such legislation can have far-reaching negative effects under the guise of parental rights by limiting fact-based education that young people need to stay safe.

"They continually call out a need to review curriculum â€” and any sex education curriculum is already being reviewed," said Alison Macklin, a senior policy adviser at the progressive group SIECUS: Sex Ed for Social Change. "So these standards are decided by experts who are educators. And there's always the opportunity for parents to review curriculum."

The leader of the group backing Arizona’s proposal, the Center for Arizona Policy, said it is about ensuring parents have control over what their children are taught.

"The purpose of Senate Bill 1456 is to look out for parental rights, to ensure that parents have access to learning materials, that parents have the opportunity to opt their child in to classes dealing with human sexuality," said Cathi Herrod, the group’s president.

She said the same is true whether the class is sex education or a discussion of the ancient Greeks, where homosexuality was common.

"It doesn’t stop those topics from being addressed, but again when we talk sex education, when we talk parental notification, parents deserve the opportunity to make that decision to opt their students in to classroom discussion," Herrod said.

Macklin called the proposals an effort to reinforce barriers.

"In a way, it's a subliminal way of trying to get anti-homosexual legislation put in, by saying you can't speak or talk about it in schools,” she said. "We would never make that type of legislation around other historical movements."

Opponents of the Arizona legislation pointed to the repealed 1991 law about HIV/AIDS instruction as a motivation for the new proposal. LGBTQ groups sued over the law nearly 30 years later.

The 2019 repeal came after the state's top school official and attorney general refused to defend Arizona against the lawsuit alleging unconstitutional discrimination and restriction of educational opportunity for LGBTQ students.

The legislation has grabbed the attention of a group of college students who say Arizona’s sex education is already backward and the measure moves it even farther away from what young people need to know.

Lee Chiffelle, a junior studying astrophysics at Arizona State University, said she started promoting changes to sex ed policies as a high school student frustrated with the lack of factual, honest education. She said she got the most important lessons from her mom, but not all young people can rely on their parents.

"I was lucky, but a lot of my friends weren't that lucky," Chiffelle said. "A lot of parents seem to think that if you don't talk about it, teenagers won't have sex, which is definitely not true."

Arizona’s measure would bar schools from providing sex education before fifth grade, require 60 days' notice of curriculum changes and mandate public meetings about those revisions, even those required under the new law.

Chiffelle said she’s concerned about everything from parents not returning permission slips to the sex ed ban before fifth grade, which is focused on "good touch-bad touch” skills and how to tell if they’re being abused and how to get help.

The most dangerous aspect of the new proposal, she said, is favouring traditional gender roles and limiting discussions about sexual orientation and gender identity.

"We need this education to promote an inclusive environment, an accepting environment, because LGBTQ-plus teens, they have incredibly high rates of suicide,” Chiffelle said. "But when they are placed in an environment that's accepting to them and inclusive to them, those suicide rates drop drastically."