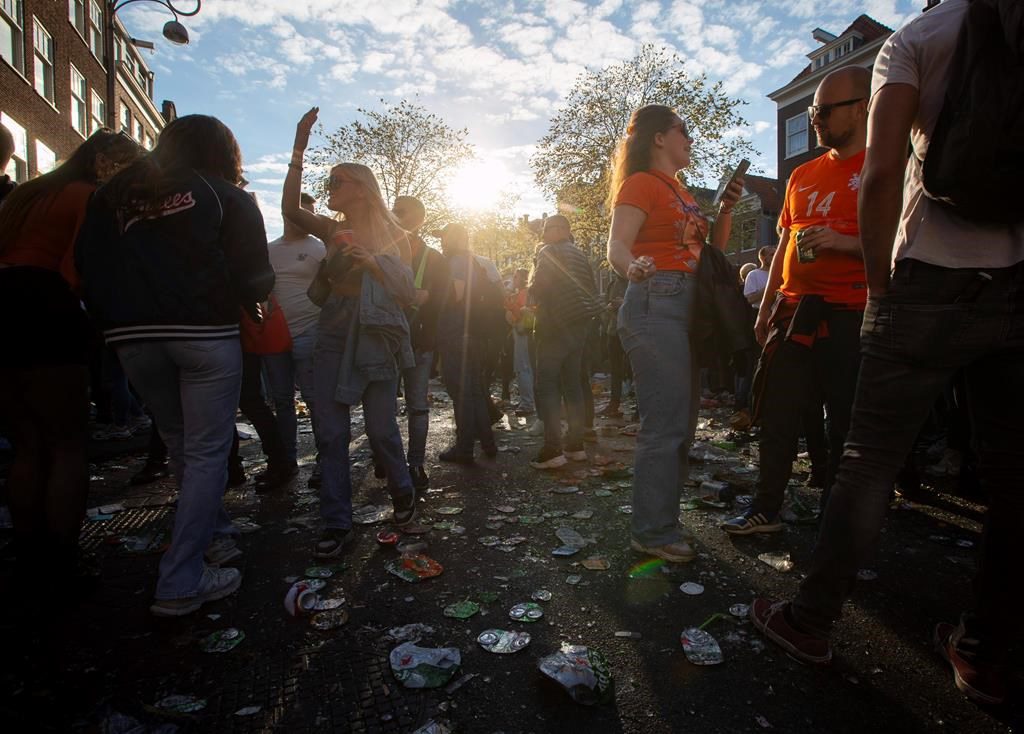 AMSTERDAM â€” Crowds gathered in cities across the Netherlands on Tuesday despite authorities urging people to stick to coronavirus social distancing regulations as the country marked the King’s Day national holiday.

This year, the celebrations for King Willem-Alexander’s birthday came as lockdown fatigue is rising and a day before an easing of some restrictions even though hospitals are having to postpone regular medical procedures so they can focus on the high level of COVID-19 patients.

Even so, clear blue skies and warm weather sent people crowding into city parks and prompted authorities to tell them to go home and urge others to stay away.

Many did not pay attention. In scenes reminiscent of King's Day celebrations before the pandemic, some canal-side streets near Amsterdam's historic Westerkerk church were packed with mostly young revelers singing and drinking Tuesday evening. Police eventually broke up the gathering when some party-goers started to fight each other.

Amsterdam’s municipal authorities shut off access to two of the city’s main parks by early afternoon and urged people to stay away from the Dutch capital, saying it was too busy. Two other major cities, Utrecht and Rotterdam, tweeted out similar messages in the afternoon.

In the central city of Arnhem, hundreds packed into a central market square for a demonstration against the government and lockdown measures, prompting city officials to urge people to stay away as the area was full.

The protesters marched through the city chanting slogans including "We are the Netherlands" and "Love, freedom, no dictatorship!" as scores of police monitored the demonstration, which remained peaceful and ended with organizers thanking police and the city’s mayor.

King Willem-Alexander marked his 54th birthday in Eindhoven, a southern city that brands itself as a hub for high-tech innovation, with a largely digital version of the annual royal walkabout.

The king, who publicly expressed regret last year for going on a vacation in Greece during the pandemic, paid tribute to care workers unable to join festivities.

"Our hearts go out to the people who can’t celebrate today,” he said, adding that he hoped for "a normal King’s Day next year.”

The national holiday is usually an occasion for the Dutch to drape themselves in orange clothes, hats and feather boas, sell old toys and books in street markets and crowd the streets of major cities.

Not this year. The capital, Amsterdam, urged residents to celebrate according to lockdown guidelines with a maximum of one visitor, but added "you can still dig out the orange T-shirt or silly hat and hang out the flag."

In an attempt to prevent rioting, Arnhem Mayor Ahmed Marcouch gave police special powers for the day to check people coming into Arnhem and imposed a limit of 500 people for the demonstration, later raised to 1,000.

Marcouch said that demonstrations are a constitutional right, but that "signals of the risk of rioting at different locations in the city endanger that right to demonstrate."

On Wednesday, the national lockdown is being eased with measures including the end of a nationwide curfew imposed in mid-January and cafes allowed to reopen their outdoor terraces â€” under strict conditions â€” from noon to 6 p.m.

Mike Corder reported from The Hague.