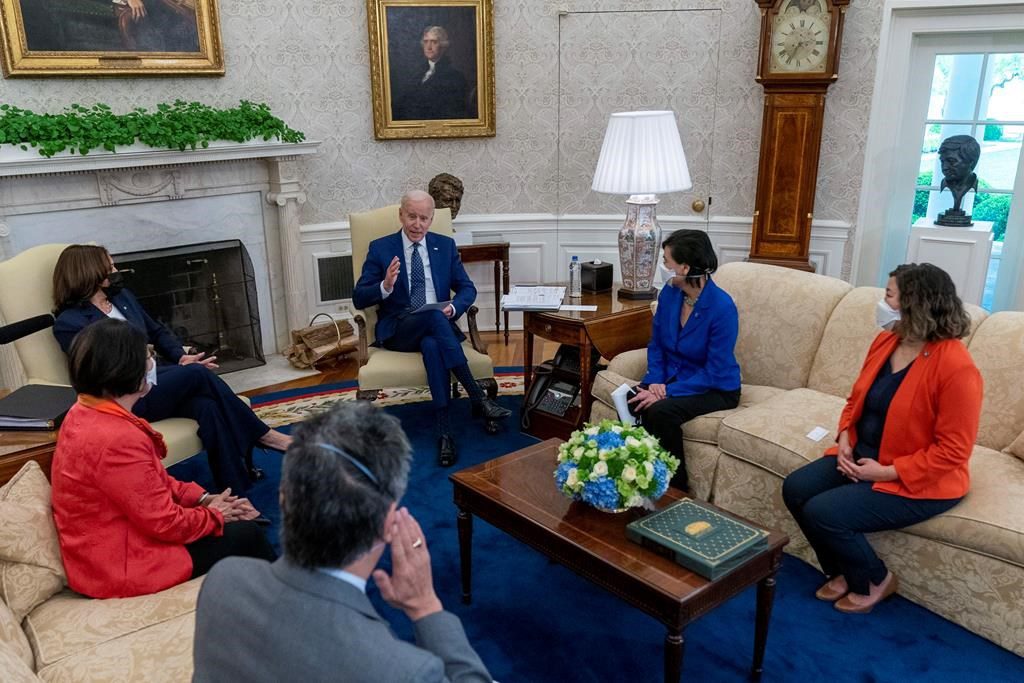 WASHINGTON â€” The pictures always make it look so presidential: Joe Biden sitting in a tall-back chair, surrounded by the arrayed members of Congress invited for a meeting at the White House.

But inside the Oval Office, lawmakers tell a different story, of a president so warm, so engaged, so animated â€” standing up, sitting down, calling on lawmakers by name, swapping stories about their hometowns â€” and so determined to make them get to work and get things done.

On their way out the door, they are offered a chocolate chip cookie, that most American of snacks, a to-go boost for the potential partnership between this White House and the Congress.

"It was the day that you will remember, not so much because you were in the Oval Office, but because of the attention the president gave to us â€” the personal attention, the commitment, the authenticity and the seriousness of caring about people, and especially people who have been marginalized," said Rep. Joyce Beatty, D-Ohio, the chair of the Congressional Black Caucus.

"Very presidential with a personal flair," she said.

The outreach to Capitol Hill is nothing out of the ordinary. New presidents typically check the box of inviting lawmakers to the White House at the start of an administration to set the stage for the legislating to come.

Donald Trump held impromptu White House sessions on a range of topics in freewheeling, often televised gatherings unlike many the country had ever seen. Barack Obama took a more measured approach, even though he, too, sweetened the White House visits with M&Ms candies to go.

Biden has hosted more than 100 lawmakers for a visit during his first 100 days, from powerful committee chairs to influential caucus leaders, Republicans and Democrats alike. Part get-to-know-you sessions, part strategy building, the private meetings are often seen as a bit of political theatre for all sides to at least appear to be putting their best selves forward.

But unlike his immediate predecessors, Biden is a veteran of Capitol Hill, who not only knows many of the lawmakers personally, but also understands the rhythms of their workdays in Congress. Digging deep into the roster of lawmakers, he is bringing in the subcommittee chairs handling infrastructure, the former small-town mayors with executive office know-how and those who, despite years on Capitol Hill, have never seen the inner sanctum of the Oval Office.

The invitations convey his understanding of the value of sharing power, assigning prominence and tapping into the pent-up desire of even the most partisan legislators to legislate.

Sending them off with pockets full of cookies wrapped with the golden seal of the presidency doesn't hurt, either, a little chocolate chip cookie diplomacy to carry back to the Hill.

"President Biden has always believed in engaging Congress as a co-equal branch of government," said Rep. Joe Neguse, D-Colo., a rising member of party leadership, who shared his cookies with his staff. "And the proof is in the results â€” his agenda has moved through Congress very swiftly."

As the president rounds the 100-day milestone, the proceeds of his many hours of outreach will be put to the test as Congress considers the administration's priorities, particularly Biden's $2.3 trillion infrastructure package.

The president was able to quickly usher passage of the massive $1.9 trillion COVID-19 rescue, signed into law last month, but the next bills to revamp election laws, gun control and immigration will be more difficult in the narrowly divided House and Senate, with slim Democratic majorities and the need for some Republican bipartisanship.

Sen. Jon Tester, D-Mont., the chair of the Veterans Affairs Committee, was among an early group visiting the White House at the start of the administration to discuss virus aid.

The senator had never attended an Oval Office meeting, and as the group went around the room, the president “did mostly listening," Tester said.

But when it was done, "The instructions were: Get the damn thing passed."

Still, for all the overtures, the White House quickly rebuffed a group of 10 Republican senators who ventured to the White House with an alternative virus aid package the administration dismissed as insufficient.

As the Republicans made their opening offer that day, Sen. Mitt Romney, R-Utah, even showing charts with his ideas and assessments, Portman said the president told them staff would follow up. But it turns out staffers were shaking their heads silently no, signalling the go-it-alone strategy to come.

Republican Sen. Todd Young of Indiana said the atmosphere "was friendly, it was accommodating, there was a whole lot of listening, and back-and-forth exchange. But we never heard back.” He said, “That’s very troubling."

The next day, the Senate Democratic leader, Chuck Schumer, announced they would move forward under the so-called budget reconciliation procedure, and the coronavirus bill was eventually approved on a straight party-line vote, all Republicans opposed.

Conspicuously absent from the invite list have been some of the top Republican leaders.

The White House considered the COVID-19 relief an emergency package, which needed to be approved swiftly, unlike the infrastructure bill that is expected to take months to bring to passage as the president reaches for bipartisanship.

At Monday’s meeting with the former mayors and governors about his infrastructure plan, Biden opened with a direct approach about the importance of investing in the United States, particularly as the country competes with China.

"The president very much stressed that he wants to work with Republicans on this, but we are serious," said Rep. Norma Torres, D-Calif., a former mayor.

As the Republicans suggested alternatives, balking at Biden’s proposal to raise the corporate tax rate from 21% to 28% to pay for it, the president gave them an assignment.

"I will wait to hear from you," Biden told the group, as Torres recalled. But he also put them on a quick timeline and said he wanted "a reasonable compromise."

And then there are the meetings that sometimes go without notice.

At the end of a Rose Garden ceremony over gun violence, as the crowd of lawmakers and families of those killed in mass shootings began to disperse, Biden quietly did a U-turn and gathered some of them inside the Oval Office, discussing gun control legislation in Congress.

"Joe Biden is nothing if not gracious, and generous with his time," said Richard Blumenthal, D-Conn., who was among those in the room that afternoon, and had a cookie.

"We've known him for a lot of years. He's Joe, even though he's Mr. President."