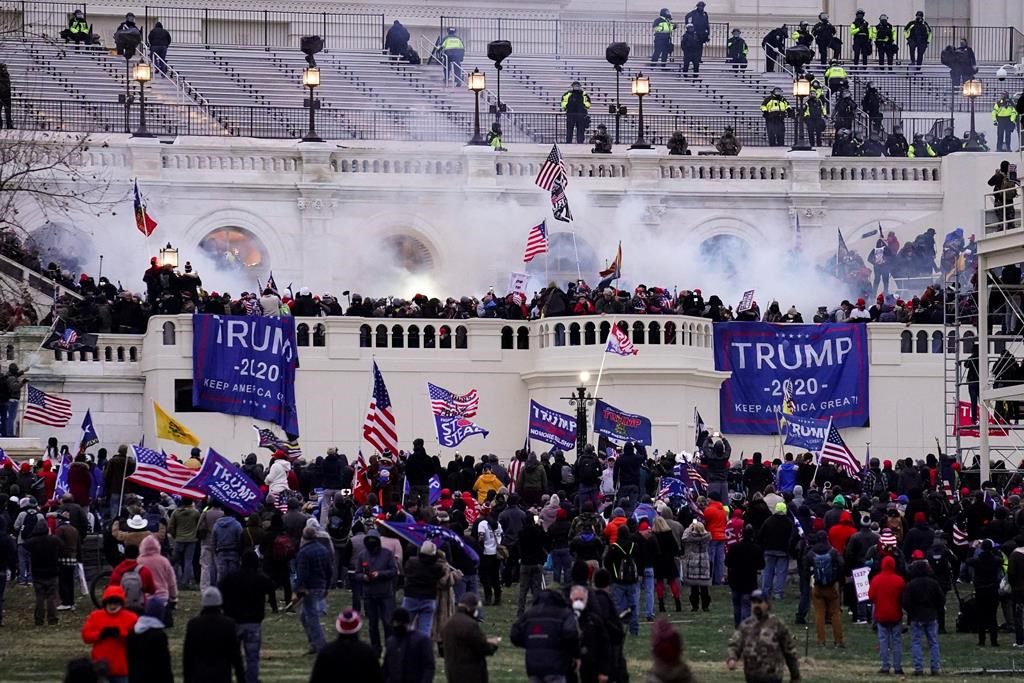 WASHINGTON â€” More than 400 people have been charged with federal crimes in the Jan. 6 attack on the Capitol. But prison time may be another story.

With new defendants still flooding into Washington’s federal court, the Justice Department is under pressure to quickly resolve the least serious of cases. While defendants charged with crimes such as conspiracy and assaulting officers during the insurrection could be looking at hefty sentences, some members of the mob who weren’t caught joining in the violence or destruction could see little to no time behind bars.

"The people who were just there for the ride and somewhat clueless, I think for most of them they probably will not get prison time. And for what it's worth, I think that's appropriate," said Rachel Barkow, a professor at the New York University School of Law. “Having a misdemeanour on their record, going through all this is probably a pretty big wake-up call for most of the folks," she said.

The siege was like nothing the country had ever seen, as the mob of supporters of then-President Donald Trump descended on the Capitol to stop the congressional certification of Joe Biden’s election victory. But in the months since, Trump loyalists have worked to minimize the assault, while Democrats and others want justice for what they saw as a crime against democracy and the rule of law.

After Trump’s impeachment by the House resulted in an acquittal by the Senate, these criminal cases are one possible route for justice.

It’s a formidable task for lawyers and judges alike to determine the appropriate punishment to seek and hand down. Many defendants had steady jobs and no criminal records, factors typically rewarded with leniency in the criminal justice system.

As plea negotiations ramp up, the Justice Department must work to differentiate between the varying actions of the members of the mob that day without making it seem like some are getting away with mere slaps on the wrist.

Of the more than 400 federal defendants so far, at least 100 are facing only lower-level crimes such as disorderly conduct and entering a restricted area that do not typically result in time behind bars for first-time offenders. Hundreds more were also charged with more serious offences â€” like conspiracy, assault or obstruction of an official proceeding â€” that carry hefty prison time of years behind bars, but theses defendants could take pleas that would wipe those charges from their cases. Prosecutors have said they expect to charge at least 100 more people.

It's going to be a test of racial fairness. The majority of the defendants are white. Black and Latino defendants tend to face harsher sentences for the same crimes, and from the moment the mob marched on the Capitol, there were questions about whether the law enforcement response would have been different had the rioters been people of colour.

Only one defendant â€” a heavy metal band guitarist and member of the Oath Keepers extremist group â€” has pleaded guilty so far. Prosecutors have said more plea offers are coming.

Jon Ryan Schaffer, who authorities have described as a "founding lifetime member" of the militia group, has agreed to co-operate with investigators, and in return the the Justice Department has promised to consider putting him in the federal witness security program. Schaffer may prove useful to prosecutors in perhaps their most serious case against 12 members and associates of the Oath Keepers accused of conspiring with one another to block the certification of Biden’s victory.

Schaffer, the front man of the band Iced Earth, pleaded guilty to obstruction of an official proceeding and entering and remaining in a restricted building with a dangerous or deadly weapon. The first carries up to 20 years in prison, but federal sentencing guidelines call for about three years to 4 1/4 years, the judge said. Prosecutors may ask for an even lighter sentence in exchange for his co-operation against other defendants.

In New York this past week, a 37-year-old man who wasn’t part of the insurrection but admitted posting videos and other materials expressing support for the violent mob was convicted of federal charges of threatening to kill members of Congress. Prosecutors have said Brendan Hunt faces up to 10 years in prison.

If prosecutors seek stiff sentences for the lowest level Capitol riot defendants, they could lose their credibility with judges, said Laurie Levenson, a former federal prosecutor who now teaches at Loyola Law School. And if they set the standard too high, they'll be juggling hundreds of cases going to trial instead of focusing on the major offenders. Those most serious cases are where prosecutors can and should send a strong message, Levenson said.

"If there's any pressure on the Justice Department, it's to deal with these cases in a way so that you never have to see them again," she said. "And if people think that the price isn't too high, who knows?"

At least one judge has expressed frustration at the pace of the prosecutions, which have overwhelmed the federal court already backlogged because of pandemic-related delays. On Tuesday, U.S. District Judge Christopher Cooper ordered the pretrial release of a man who was photographed sitting with his feet on a desk in House Speaker Nancy Pelosi's office. The judge expressed concern that the case is moving too slowly.

Cooper noted that Richard Barnett has been jailed for nearly four months and questioned whether his time behind bars while the case is ongoing could exceed a possible sentence should Barnett plead guilty. The prosecutor estimated that the government would recommend a prison term ranging from nearly six years to 7 1/4 years if Barnett is convicted, though he could get credit for accepting responsibility if he pleads guilty.

In at least one instance, however, prosecutors have indicated they aren’t willing â€” at least yet â€” to let the defendant plead guilty to lesser charges.

A lawyer for Jenny Cudd, a West Texas flower shop owner who posted a video on Facebook bragging about the riot, told a judge during a hearing this week that prosecutors did not provide the defence with a plea offer.

"We inquired as to why, in response the government stated that we’re free to plead to a felony,” Cudd's lawyer said. “To which we responded: 'Is that a joke?'"