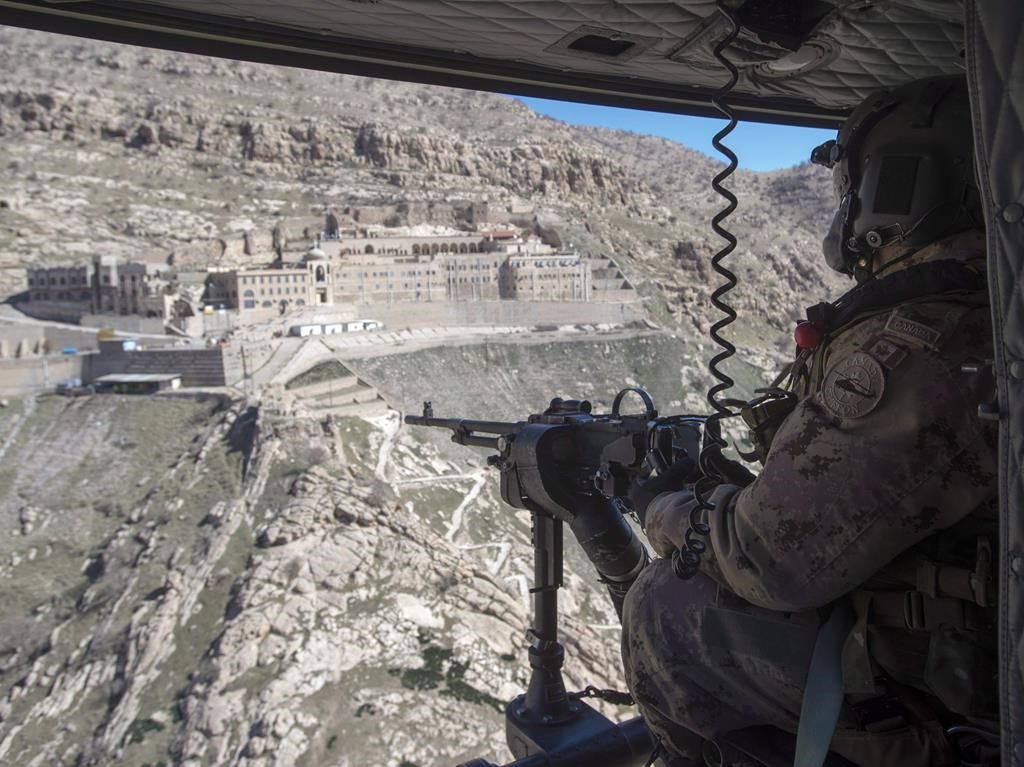 OTTAWA â€” Some Canadian soldiers supported a major military offensive last month that U.S. and Iraqi officials say killed dozens of fighters loyal to the Islamic State of Iraq and the Levant, according to the commander of the country’s military elite special forces.

The Canadians also provided surveillance and assistance with resupplying local forces as the assault in the Makhmur Mountains was underway, Dawe added, and were on standby with helicopters to provide medical evacuations.

“I can say we were part of the coalition effort to support it,” he said. “Our aviation detachment was providing medevac support, was on standby for that. Helping with a little bit of surveillance, as well.”

The revelations about Canada's involvement in Operation Ready Lion represent the first real update in more than a year about what the roughly 200 Canadian special forces soldiers currently in Iraq are doing as part of Canada's ongoing fight against ISIL.

They also coincided with the federal government's recent decision to extend the entire mission, which also involves hundreds of non-special forces troops scattered in Iraq and the surrounding region, until next March.

Canada has had special forces in Iraq since September 2014, when the international community first scrambled to stop ISIL from taking over large swaths of Iraq and Syria. While Canada's anti-ISIL mission has evolved several times, it has continued to include special forces.

Dawe confirmed Canada's special forces are continuing to operate out of a military base near the city of Irbil, in Iraq's northern Kurdistan region. That base has come under attack from rockets several times over the past year, but Dawe said no Canadians have been hurt.

Operation Ready Lion was launched on March 9 and, over the course of the next two weeks, saw Iraqi and coalition aircraft pound a series of ISIL tunnels and bunkers with 312 airstrikes. ISIL fighters who tried to flee were captured or killed by Iraqi snipers.

U.S. and Iraqi officials say 120 hideouts were destroyed and at least 27 ISIL fighters killed, though it's unknown how many may have been buried in the cave complex, which sits in an area of the country that is difficult to police.

While the operation has been hailed as a success, Dawe said Canada's support is "the exception to the trend" when it comes to what his troops have been doing in Iraq.

Dawe would not get into specifics, but suggested the training and assistance that Canadian troops have been providing to their Iraqi counterparts has shifted from working alongside them on the battlefield to more behind-the-scenes planning.

That reflects the Iraqis having started to develop their own skills and experience as they hunt down ISIL cells and sympathizers, Dawe said, though he confirmed Canadian troops do sometimes accompany their charges into the field.

Dawe again wouldn't provide details, but said Canadian troops have fired in self-defence on at least one occasion "in the last couple years."

The military and federal government faced questions earlier in the mission about whether Canadian special forces were in combat, even though officials insisted they only fired in self defence and were not engaged in "offensive combat operations."

Sgt. Andrew Doiron is the only Canadian to have been killed during the ISIL mission, but died from so-called friendly fire in March 2015. The government's decision to extend the anti-ISIL mission comes amid uncertainty about exactly what form Canada's presence in Iraq and the surrounding region will take in the coming months.

That includes a NATO training mission that previously involved 250 Canadian troops and was led by a Canadian, Maj.-Gen. Jennie Carignan, until command was transferred to Denmark in November. Canada now has only 17 trainers involved in the mission.

Brig.-Gen. Mike Wright, who as commander of Joint Task Force Impact oversees those parts of Canada's anti-ISIL mission that don't involve the special forces, says NATO is now working with Iraq to determine the best approach to the training effort.

"We remain plugged in, we being the Canadian Armed Forces at NATO, because those discussions about the future of the (Iraq training) mission happen in Brussels," he said, suggesting the results of those discussions will determine Canada's future contribution to the effort.

Canada also has a headquarters unit, two CC-130 Hercules transport planes and support staff in Kuwait involved in the anti-ISIL mission, along with teams of military trainers in nearby Jordan and Lebanon.

All told, there are about 500 Canadian troops in the region, though the federal government has authorized up to 850.

There has been growing concern about the threat posed by Iran and Iranian-backed militia groups in Iraq, even as the number of ISIL fighters believed to be in Iraq and Syria has shrunk from between 14,000 and 18,000 to between 8,000 and 16,000.

While that has led to analysts arguing the purpose of the mission has shifted from dealing with ISIL to checking Iran, Dawe and Wright were both adamant that their focus remains on ISIL, which is also known as Daesh.

"Our mandate is the defeat of Daesh," Wright said. "So that’s what we remain focused on. … Obviously, we pay attention to other threats within the region for situational awareness and force protection."