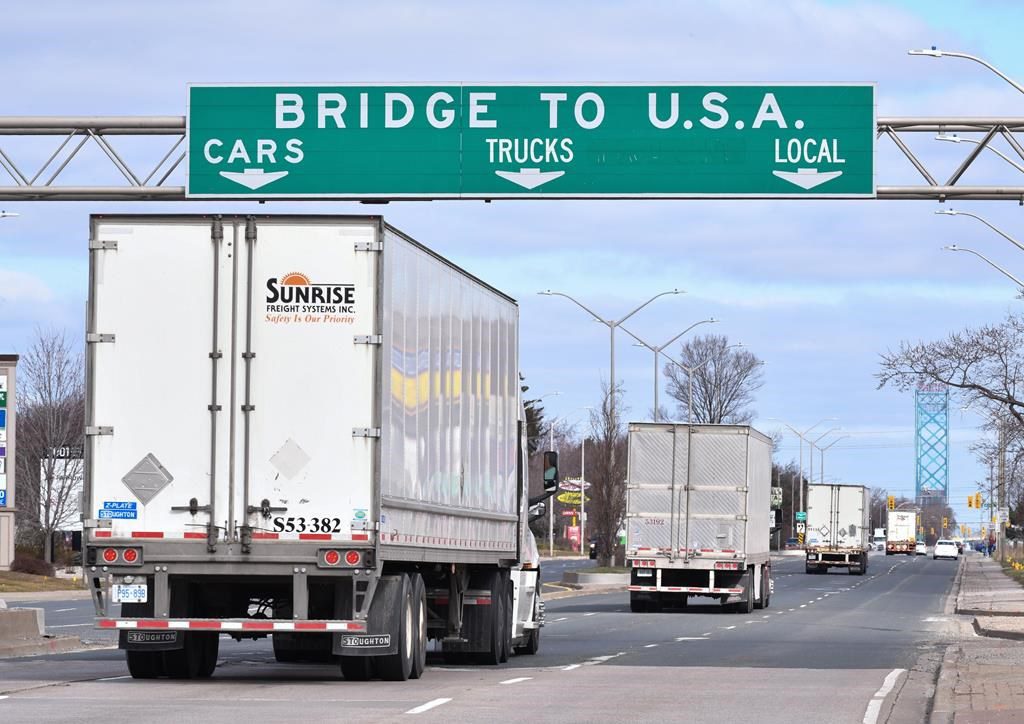 WASHINGTON â€” North American trade is facing a “critical moment” in the ongoing aftermath of the COVID-19 pandemic, say Canadian business leaders as they embark on a concerted campaign to fortify ties with the United States.

The new Canada-U.S. “road map” partnership is the ideal platform to start reinforcing existing relationships and confronting some long-standing irritants â€” but time is of the essence, the Canadian Chamber of Commerce argues in a new lobbying effort launching Tuesday.

“Simply put, there is no path to our trade recovery without a meaningful renewal of the Canadian-U.S. trade relationship,” said chamber president and CEO Perrin Beatty.

“That's why the Canadian Chamber of Commerce plans on laying the groundwork for that renewal now, so our members can fully exploit the rebound and recovery opportunities when the time comes.”

â€” Lobbying the federal government to establish a plan to reopen the Canada-U.S. border “that is underpinned by clear metrics and dates.”

â€” Establishing a common bilateral approach to both shared environmental challenges and energy infrastructure, as well as supply chains for critical mineral development.

Despite familiar rhetoric from both Ottawa and the White House about the importance of the relationship, it will fall to Canada to ensure its best interests are represented, said Mark Agnew, the chamber’s vice-president, policy and international.

“Few Americans wake up in the morning in Washington thinking about how to do Canadian businesses a favour,” Agnew said.

“Remember, we’re not the only ones that are trying to appeal to American self-interest â€” the Brits are there, the Aussies are there, the Japanese are there, you name it â€” plus the U.S. has its own fairly substantial domestic issues. We need to be able to cut through that.”

There’s also no shortage of disagreement on a variety of issues, some long-standing and others more recent.

President Joe Biden sent a clear signal on his first day in the White House when he cancelled the Keystone XL pipeline expansion, which would have ferried an additional 800,000 barrels of diluted oilsands bitumen from Alberta to refineries on the U.S. Gulf Coast.

Biden’s strident language on ensuring American workers, suppliers and contractors are the primary benefactors of his $2-trillion infrastructure plan has been little comfort to their Canadian counterparts.

And U.S. Trade Representative Katherine Tai has shown no indication she intends to lower the temperature on two other familiar sources of friction: softwood lumber and American access to Canada’s dairy market.

“What we’re afraid of is that coming out the other end of that, you’ll have a process where the narrative becomes all about reshoring back into the United States,” he said.

It was in late February when Biden and Prime Minister Justin Trudeau met to finalize the details of their bilateral road map, which in the name of high-level diplomacy focused on areas of “shared vision” and “mutual concern.”

Priorities included battling the pandemic, rebuilding the Canadian and U.S. economies and syncronizing efforts on both sides of the border to reach net-zero emissions by 2050.

It also mentioned social diversity and inclusion, expanded co-operation on continental defence and modernizing Norad, and renewed faith in global institutions like NATO and the World Trade Organization.

“It would gloss over the important role that Canadian businesses play in U.S. supply chains, and continental supply chains writ large.”

“You can’t go in relying on the goodness of people’s hearts. What you need to be articulating is, ‘Canada wants you to do this, and it is in the American self interest to do X or Y, how does it align together?’ ” Agnew said.

“What do we bring to the table proactively, rather than just always being on the back foot, asking for things?”