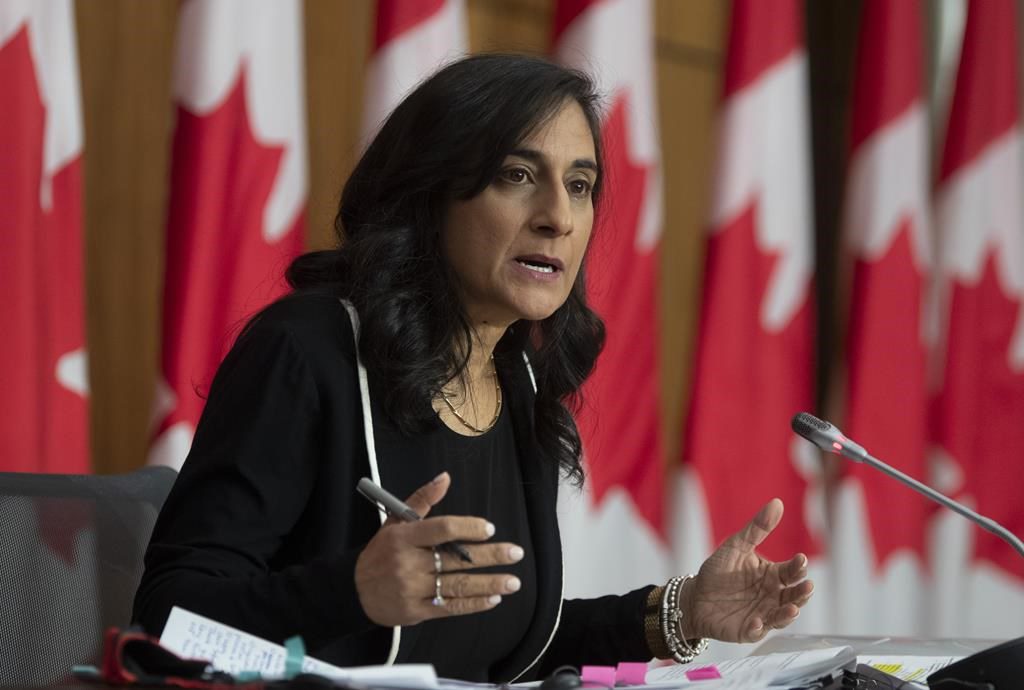 OTTAWA â€” Canada’s procurement minister says she is in the midst of negotiating new vaccine contracts to nail down supplies of vaccine booster shots if they’re needed next year.

“We are actively planning for 2022,” Anita Anand said in a recent interview with The Canadian Press.

She said Canada’s first priority remains getting doses now, and while the country remains well behind the United States, United Kingdom and several other countries, its vaccination pace has picked up significantly in the last month.

Canada expects to get every adult vaccinated fully â€” with both doses of the Pfizer-BioNTech, Moderna or Oxford-AstraZeneca vaccines or one shot of the single-dose Johnson & Johnson â€” by the end of September at the latest.

Teenagers likely will be vaccinated by then as well, but vaccines for kids under 12 aren’t expected to be authorized until at least the fall.

Still, many experts believe additional booster shots are going to be necessary, either to remind the immune system what it needs to do, or protect against some new variants of the virus that causes COVID-19.

Most of Canada’s current vaccine suppliers are already testing new versions against variants, including Pfizer and Moderna.

Health Canada has initiated a plan to authorize boosters without the same extensive testing required to approve the original vaccines, similar to how flu shots are authorized each year after being adjusted for the new strain of flu virus believed to be dominant.

Canada has already purchased 117.6 million doses of the four vaccines authorized, which could fully vaccinate all Canadians once, and about half the population twice.

Another 124 million doses would be available if Canada approves vaccines from Novavax, Medicago or Sanofi-GlaxoSmithKline.

And there are options for up to 180 million additional doses, though some of those have already expired.

“In some cases, we are amending contracts, in other cases, we are negotiating additional contracts,” she said. “So it is very intense at the current time in terms of planning for the 2022 buy. But the key is to make sure we have the flexibility in place in our contracts to ensure that we can have the doses needed for 2022 and beyond.”

She said Canada could also seek vaccines outside of the existing suppliers, if that is recommended by the national task force advising the government on what vaccines to go after.

Most of those talks will still require Canada to import vaccines made elsewhere. Medicago plans to make some doses in Canada, and Novavax is signed up to make up to two million doses a month at a National Research Council facility in Montreal, starting late this year or early in 2022.

Being 100 per cent reliant on imports has hurt Canada’s vaccine program thus far. All the suppliers have said Canada asked them to make doses domestically, but they didn’t think Canada had the facilities available to do it quickly enough.

After a very rocky winter, when deliveries slowed to almost nothing for a month in February and early March, data from the Our World in Data project shows Canada’s vaccination rate is now outpacing much of the world’s.

Comparisons to other countries are complicated by several factors, including which vaccines are being used, and the fact most vaccines require two doses but some countries, including Canada, chose to delay the second dose longer to get a first dose to more people sooner.

In terms of overall vaccinations injected per capita, Canada lags down around 33rd in the world, and 6th out of the G7 nations. Only Japan, which only started vaccinating people in February, is behind.

Canada now stands 16th in the world for new vaccinations, and because it has delayed the second dose up to four months, Canada sits 14th globally for the proportion of people with any vaccination protection at all.

When it comes to people fully vaccinated, however, Canada is 38th.

Canada has now vaccinated more than one in five people with one dose, up from less than one in 10 four weeks ago.