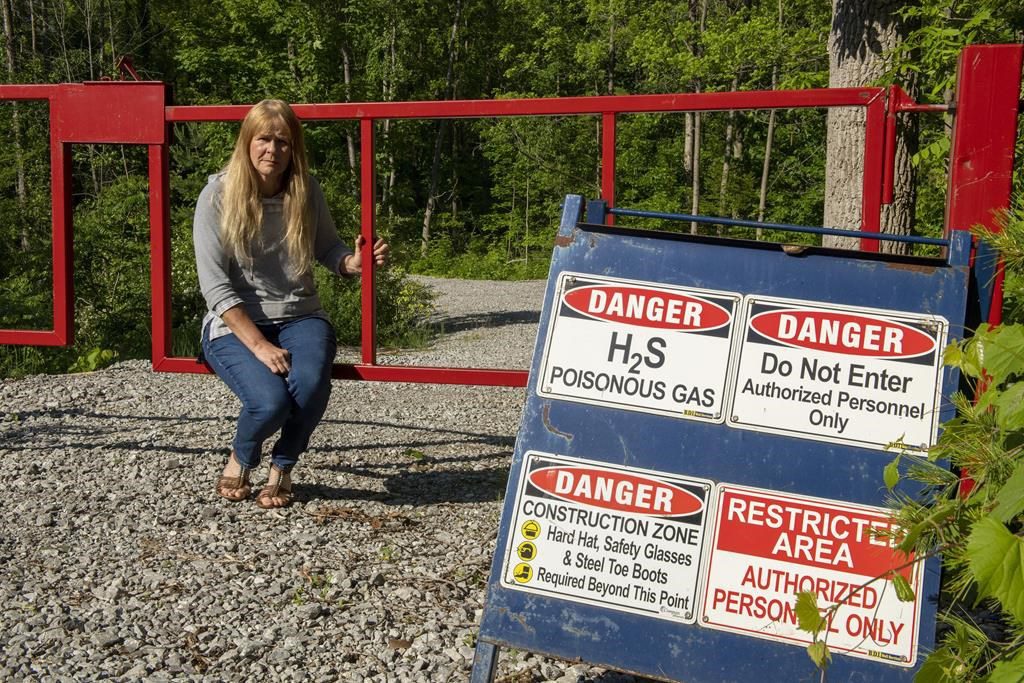 The putrid smell makes Paula Jongerden sick to her stomach.

It comes from a natural gas well about 300 metres from her home near Delhi, Ont., that erupts at least twice a week.

A road sign on Forestry Farm Road, where she lives in Norfolk County, is adorned with a skull and crossbones warning of the danger. An over-powering smell of rotten eggs sets in on days when there is no wind.

“It burns your eyes,” she said. “When that happens I can’t open my windows. It’s concerning, obviously, not being able to freely use my own property because of it.”

Everyone in the area knows about it, she said.

Jongerden, a retired nurse, and her neighbours have been grappling with the unpredictable nature of the “burps,” which have been spewing methane and hydrogen sulfide – a toxic gas in high concentrations – into the area since 2015.

Brian Craig, who lives nearby and teaches environmental science at the University of Waterloo, said the well near Jongerden’s property was drilled in the 1950s. It was later deemed unusable and was subsequently capped in 1968, which caused eruptions of other wells in the area, so a relief well was drilled nearby.

But in 2015, he said the province plugged the relief well, which he and other neighbours believe has created the current problem.

A spokeswoman from the Ministry of Natural Resources denies that, saying that “to date, there is no evidence that a domino effect has occurred.”

Craig said years of efforts to address the issue have been tied up in red tape.

He said the province has a program to remediate abandoned and orphaned wells, but it is not properly funded to deal with the issue.

“We need a treatment plant to remove the hydrogen sulfide,” he said. “It’s been six years and nothing has happened and $1.4 million has been spent.”

The county is conducting a new study to find a solution, but in the meantime people living in the area continue to put up with the smell coming from the erupting well.

“It is more concerning to me what’s happening over the long-term to human health,” Jongerden said. “Who knows what it’s doing to people’s health.”

Jongerden and Craig are not the only people in the province dealing with this issue. Thousands of abandoned oil and natural gas wells are scattered across southwestern Ontario – about 6,000 in Haldimand and Norfolk counties alone. Some of them erupt frequently,  emitting methane and other substances.

Many date back to the 1800s and the original businesses that drilled them have long-since disappeared, leaving their clean-up to landowners.

Norfolk Mayor Kristal Chopp said she has been lobbying the province to address the growing problem for years. Municipalities don’t have the money or technical expertise to cap and remediate the wells, she said.

“Our general manager of public health was dealing with this issue before I got elected, I mean, this has been going on for years,” Chopp said. “It’s past the point of being kind of absurd.”

Chopp said the province needs to step in and co-ordinate the clean up.

“You have so many different bodies (involved) … and nobody wants to sort of take charge of the situation,” she said.

In 2020, the federal government announced a $1.72-billion program to cap and clean up orphaned oil wells in Alberta, Saskatchewan and British Columbia.

A group of upstream oil and natural gas companies in Ontario wrote both the federal and provincial governments proposing that they be included in the program – at a cost of $270 million – to help address what it sees as a growing problem in Ontario.

According to documents obtained by Greenpeace Canada, and provided to The Canadian Press, the Ontario Petroleum Institute said there are approximately 27,000 oil and gas wells in Ontario primarily on private land.

“The OPI estimates that 4,400 wells in Ontario pose a potential risk to landowners and public health and safety,” a federal briefing note said.

The group’s funding request estimates that it would cost approximately $60,000 per well to remediate the problem. The funding, it said, would create 500 jobs and support 40 businesses across Ontario.

To date, Ontario has not been added to the federal program.

“OPI continues to seek opportunities for industry to collaborate with the federal and provincial authorities to address the risks associated with Ontario’s orphan wells,” the chairman of the regulatory committee E. Peter Rowe said in a statement.

A spokeswoman for Ontario’s Ministry of Natural Resources said the province created its Abandoned Well Program in 2005 and since then it has spent $23 million and plugged approximately 380 high-risk wells.

“We continue to look for opportunities to collaborate with industry and the federal government to address the potential public and environmental safety issues associated with orphaned and dormant wells in Ontario,” Jolanta Kowalski said in a statement.

The federal government said inactive and orphan wells are a matter of provincial jurisdiction.

“Alberta, British Columbia, and Saskatchewan have established orphan well associations that are funded by industry,” the Department of  Natural Resources said in a statement. “These provinces also account for the vast majority of orphan and inactive wells in Canada.”

Maurice Dusseault, a geological engineering professor at University of Waterloo, said abandoned wells in Ontario are among the oldest on the continent and many of the sealing technologies are now failing as a result, foreshadowing the same effect in other parts of the country in years to come.

“This is the legacy, the burden that we bear,” he said of Ontario’s early oil industry. “We’re going to have to address this issue.”

That will require both Ottawa and the province to work together to come up with a solution, he said.

A spokesman for Greenpeace Canada said not only should the federal and provincial governments create a program to clean up the oil wells, they should attempt to use historic records to track them back to their original owners where possible.

“Whoever created the pollution should pay for it,” Keith Stewart said. “There’s a huge moral hazard involved in allowing polluting companies to walk away from these liabilities for the taxpayer to clean up.”

This report by The Canadian Press was first published June 13, 2021.