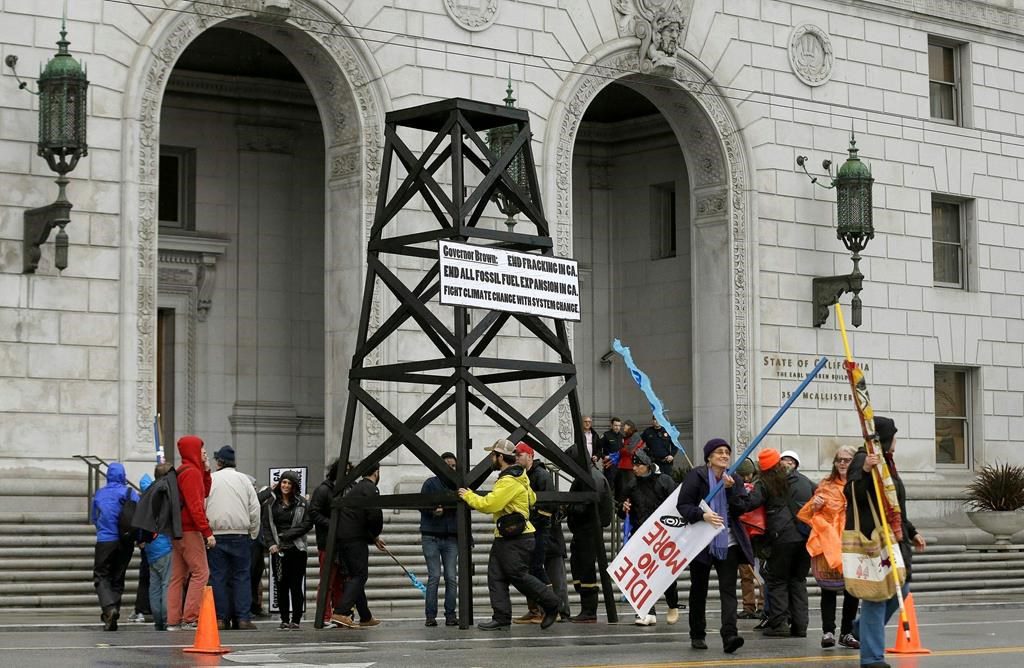 SACRAMENTO, Calif. â€” Gov. Gavin Newsom on Friday said California will stop issuing fracking permits by 2024 and halt all oil drilling by 2045, using his authority to take on the state’s powerful oil and gas industry in a year he will likely face voters in a recall election.

Newsom’s order is the beginning of a lengthy rule-making process that, if successful, would make California the largest state to ban fracking and likely the first in the world to set a deadline for the end of all oil production.

"California needs to move beyond oil,” Newsom said in a news release, arguing it would "create a healthier future for our children."

California was once one of the largest oil-producing states in the nation, with a robust industry centred in the Central Valley just north of Los Angeles. But by 2020, the state's oil production fell to its lowest level in state history, down 68% from its peak in 1985.

Now, one of the state’s top exports is electric cars. The state has ordered automakers to sell more electric work trucks and delivery vans and, last year, Newsom ordered state regulators to ban the sale of all new gas-powered cars by 2035.

Still, California is the seventh-largest oil producing state in the country, with an industry that directly employs about 152,000 people and is responsible for $152.3 billion in economic output, according to a 2019 study commissioned by the Western States Petroleum Association. Friday, WSPA President and CEO Catherine Reheis-Boyd vowed "to fight this harmful and unlawful mandate."

"Banning nearly 20% of the energy production in our state will only hurt workers, families and communities in California and turns our energy independence over to foreign suppliers," she said.

Eliminating California’s oil and gas industry won’t be easy. The state has more than 60,000 active oil wells, and industry executives and their allies have lots of influence at the state capitol. But in the first quarter of 2021, permits for all types of oil drilling in California plunged 90%, according to an analysis of state data by FracTracker Alliance, an environmental advocacy group.

"The transformation is already happening in front of our eyes," said Jared Blumenfeld, secretary of the California Environmental Protection Agency.

Newsom’s order directs the California Air Resources Board to figure out how the state can end oil production in a "very rigorous, open, transparent, analytical process." The board could decide to do it before 2045, but not after.

"When you look at the science, we can't be extracting oil after 2045," he said. "That's the only way we are going to achieve our carbon goals is by significantly reducing and ending extraction of oil."

Fracking â€” short for hydraulic fracturing, the process of extracting oil and gas embedded in rock deep underground â€” accounts for a small portion of the state's oil and gas production each year. But environmental advocates have long sought its banishment because of its harmful effects on the environment and public health.

Last year, Newsom said he did not have the authority to ban fracking on his own and asked the Legislature to do it instead. Two state senators, both Democrats, tried to do it. But last week their bill died in the Legislature because not enough lawmakers supported it.

Now, Newsom says he can do it himself, but it’s unclear what changed his mind. California Natural Resources Secretary Wade Crowfoot said Friday that Newsom believes the best way to ban fracking is to change the law. But, when it became clear that wouldn’t happen, Crowfoot said Newsom "directed us through our regulatory authorities to protect the environment and public safety to end the practice of fracking."

Newsom did temporarily halt new fracking permits in 2019 after he discovered a sharp increase in new permits since he took office, which also prompted him to fire the state’s top oil and gas regulator. That ban lifted in April 2020 after a team of independent scientists reviewed the state’s permitting process.

Since taking office, the Newsom administration has issued 291 fracking permits, according to an analysis of state data by FracTracker Alliance. Still, some environmental groups were hoping Newsom would act faster.

"It’s historic and globally significant that Gov. Newsom has committed California to phase out fossil fuel production and ban fracking, but we don’t have time for studies and delays," said Kassie Siegel, director of the Center for Biological Diversity’s Climate Law Institute. "Every fracking and drilling permit issued does more damage to our health and climate."

The Newsom administration said the state’s rule-making process, while lengthy, is needed to make sure any new rule survives a lawsuit.

"We want this prohibition to be durable," Crowfoot said.

The California League of Conservation voters praised Newsom, saying the announcement "is the consistent leadership our state needs if we stand a chance of preventing major climate catastrophe."

But some in Newsom’s own party were critical, including state Sen. Melissa Hurtado, a Democrat from the Central Valley, who said the fracking ban would lead to higher energy prices that would in turn increase food prices.

"The governor’s actions could not come at a worse time for the Central Valley, which is already reeling from a drought that â€” together with this decision â€” may cause a national food crisis," she said.