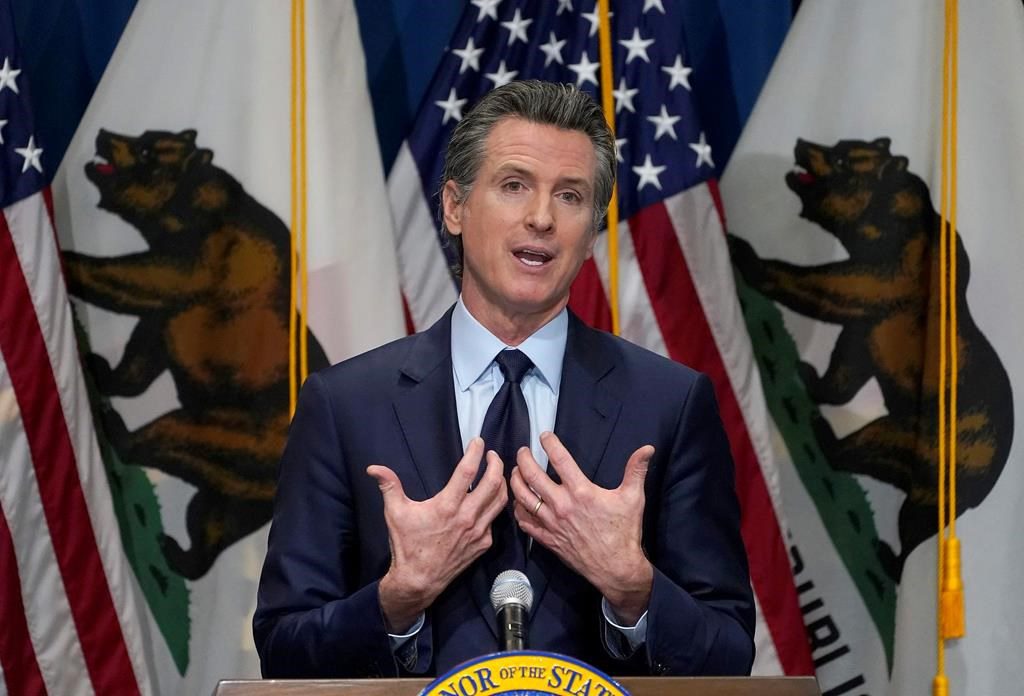 SACRAMENTO, Calif. â€” California Gov. Gavin Newsom will address the Democratic Party faithful Saturday as he mounts a campaign to keep his job.

His address to thousands of activists at the California Democratic Party’s annual convention, held virtually, comes on the heels of state elections officials announcing that a preliminary count shows the recall effort against him has enough signatures to make the ballot.

Voters will get the chance in the all-but-certain election this fall to decide whether the first-term Democrat should be booted from office before his term ends. Delegates at the convention are some of the party’s most hardworking organizers, who can knock on doors, make phone calls or provide a cheering section at rallies for Democratic candidates.

"The governor can speak and remind everyone why we supported him to be governor and why he won with an overwhelmingly majority," said Lt. Gov. Eleni Kounalakis, a fellow Democrat. To the party activists, Republicans are trying to sabotage Newsom and “that is what will ultimately create the organizational support to defeat the recall."

Vice-President Kamala Harris also is set to deliver remarks, an exciting moment for Democrats who helped her rise through California’s political ranks, from San Francisco district attorney to state attorney general to U.S. senator, before she was chosen by Joe Biden for his presidential ticket.

The annual gathering, which began Thursday, serves as a forum to debate policy, endorse candidates and otherwise energize party members. With no other major contests on the state ballot this year, Newsom's expected fall recall election will be one of the highest profile races in California and the nation.

"Being prepared to organize against and defeat a Republican recall of Gov. Gavin Newsom is going to be an important part of our conversation,” California Democratic Party Chairman Rusty Hicks said of the weekend activities.

Hicks, just reelected as party chair, said the convention will stay focused on California’s emergence out of the pandemic, including efforts to vaccinate millions of people, get schools reopened and support small businesses.

Newsom’s political fate will depend in part on how people feel about his handling of the pandemic and whether schools and businesses remain open by election time.

Republicans have blasted him over school and business closures, though recent polling shows the majority of voters support his handling of schools and the economy.

In the recall, voters will be asked two questions: Should Newsom be recalled and who should replace him? He cannot run on the second ballot. Votes for that question will only be tallied if more than half of voters want Newsom gone.

For now Democrats are united behind Newsom. The governor has depicted the recall as an attack by former President Donald Trump’s supporters on California’s progressive values, an argument that is proving salient among Democrats.

Christine Pelosi, the outgoing chair of the state party’s women’s caucus and the daughter of House Speaker Nancy Pelosi, said Democrats are excited to defend the state’s progressive ideals. But she said Democrats have to show people what they are for and stay focused on how they will help people recover from the pandemic.

"Our concern is that people won't vote if they don't think we're speaking to the realities of their lives,” Pelosi said.

Padilla will be up for election in 2022.

Sen. Dianne Feinstein, who infrequently attends state party conventions, will not deliver remarks. She’s faced heightened criticism and scrutiny about her fitness for office and she’s never been beloved by the party’s progressive activists. In 2018, they endorsed her challenger.