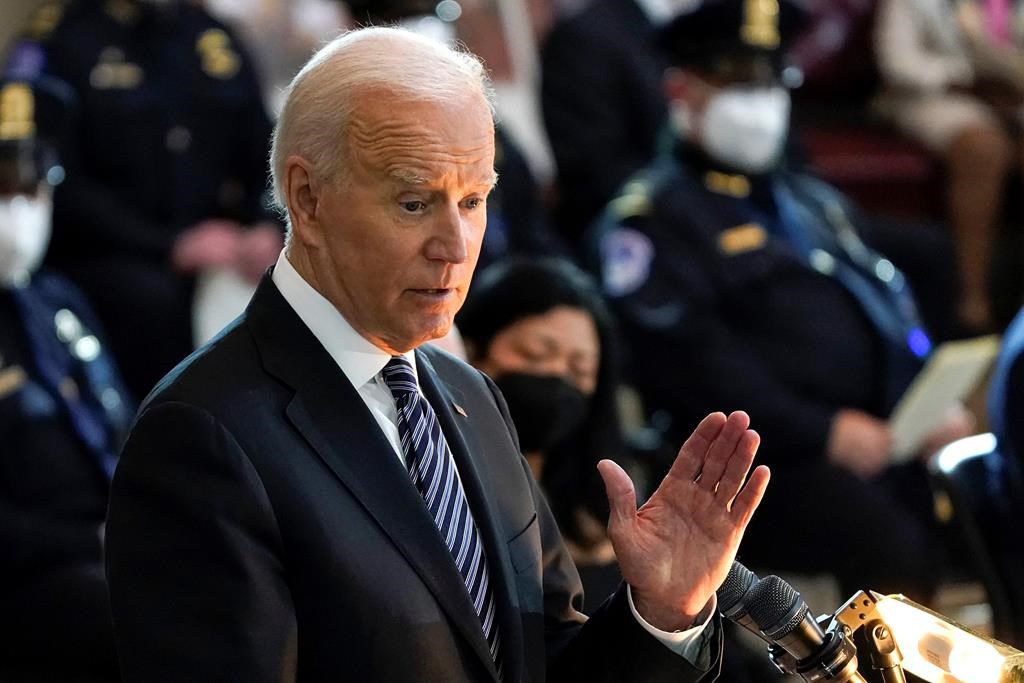 WASHINGTON â€” President Joe Biden started the clock Wednesday on the long-awaited, long-promised withdrawal of U.S. troops from Afghanistan, setting the 20th anniversary of the attacks of Sept. 11, 2001, as the deadline for ending “America’s longest war.”

From a podium in the White House Treaty Room, where former president George W. Bush launched the so-called war on terror, Biden essentially described a continued U.S. military presence as an exercise in futility.

“Our allies and partners have stood beside us, shoulder to shoulder, in Afghanistan for almost 20 years,” the president said as he announced the pullout would begin May 1 â€” predecessor Donald Trump’s deadline for his own withdrawal.

“We’re deeply grateful for the contributions they have made to our shared mission and for the sacrifices they have borne.”

Canada was among those allies and partners almost from the outset, with its 12-year presence â€” including 10 on the front lines of combat â€” costing the lives of some 159 Canadian troops.

Four civilians also died in Afghanistan, including Calgary Herald journalist Michelle Lang, as well as one diplomat: Glyn Berry, who was among the three people killed by a roadside bomb in January 2006.

For Collins, who lives in Kamloops, B.C., it will be the Afghans themselves â€” “to this day, some of the most wholesome people I have ever met,” he said â€” who will bear the brunt of Biden’s decision.

“They’re the ones getting thrown under the bus,” he said, adding he would go back to Afghanistan “in a heartbeat” to help the people he met there.

In Canada, much of the mission has largely faded from the collective memory, admitted Bruce Moncur, who was on the ground for some of the most vicious Canadian fighting in the Panjwaii district at the height of the conflict in 2006.

Moncur sustained brain damage during Operation Medusa when a pair of U.S. A-10 Thunderbolts, known as Warthogs, mistakenly unleashed their fearsome 30-mm cannons on a contingent of Canadian soldiers.

The husband of NDP MP Niki Ashton, he has since become an outspoken advocate for Canadian veterans of the war, producing YouTube documentaries about their exploits and lobbying for better treatment at the hands of the federal government.

Now studying in Manitoba to be a teacher, Moncur said some of the kids in his classes weren’t born until 2006, five years after the events in New York and Washington, D.C., that triggered 20 years of bloody Middle East conflict.

And while the sacrifices of Canadians in Afghanistan may have helped advance foreign-policy interests and ties with the U.S., he said, the mission’s lofty developmental goals â€” instilling democratic values and more rights for Afghan women, for instance â€” have largely gone wanting.

The alliance has agreed to withdraw its roughly 7,000 troops starting May 1, although NATO chief Jens Stoltenberg didn’t commit to completing the effort in time for Sept. 11.

“We went into Afghanistan together, we have adjusted our posture together and we are united in leaving together,” Stoltenberg said.

While Canada completed its own pullout in 2014, some 9,600 NATO soldiers remain in Afghanistan, about 2,500 of them members of the American contingent.

Many will argue, Biden acknowledged, that a diplomatic solution to the challenges in Afghanistan cannot succeed without American troops there to backstop the effort.

“We gave that argument a decade. It has never proved effective,” he said.

“Our diplomacy does not hinge on having boots in harm’s way, U.S. boots on the ground. We have to change that thinking.”

True to form, Republicans like South Carolina Sen. Lindsey Graham and Wyoming Rep. Liz Cheney, the third-ranking Republican in the House of Representatives, were quick to condemn the decision.

“Any withdrawal of forces that is not based on conditions on the ground puts American security at risk,” Cheney told a news conference.

She called Biden’s choice of the Sept. 11 deadline “a huge propaganda victory for the Taliban, for al-Qaida â€” the notion that on the day that they attacked us, we are going to mark that anniversary by withdrawing our forces.”

But in the 10 years since the decade-long U.S. effort to capture and kill al-Qaida leader Osama bin Laden finally bore fruit in 2011, the rationale for remaining in Afghanistan has only grown murkier, Biden said.

And the terrorist threat once so concentrated in the desolate Panjwaii plains and the caves beneath the Hindu Kush mountains has been “metastasizing around the globe” ever since.

“With the terror threat now in many places, keeping thousands of troops grounded and concentrated in just one country, at a cost of billions each year, makes little sense to me and other leaders,” Biden said.

“We cannot continue the cycle of extending or expanding our military presence in Afghanistan, hoping to create ideal conditions for the withdrawal and expecting a different result.”

Following the announcement, Biden paid a visit to Section 60 of Arlington National Cemetery, where the bulk of America’s most recent war dead from Afghanistan and Iraq are buried.

He wandered among the meticulous rows of modest white marble headstones, pausing occasionally to study a name, at times dabbing at his eyes.

“I have trouble these days ever showing up at a veteran’s cemetery and not thinking of my son, Beau,” he said. Beau Biden served in Iraq as a member of the U.S. Army JAG Corps in 2009 before his death from brain cancer in 2015.

“He thought it was the right thing to do,” Biden said, before looking around and adding, “Look at them all.”

â€” With files from The Associated Press