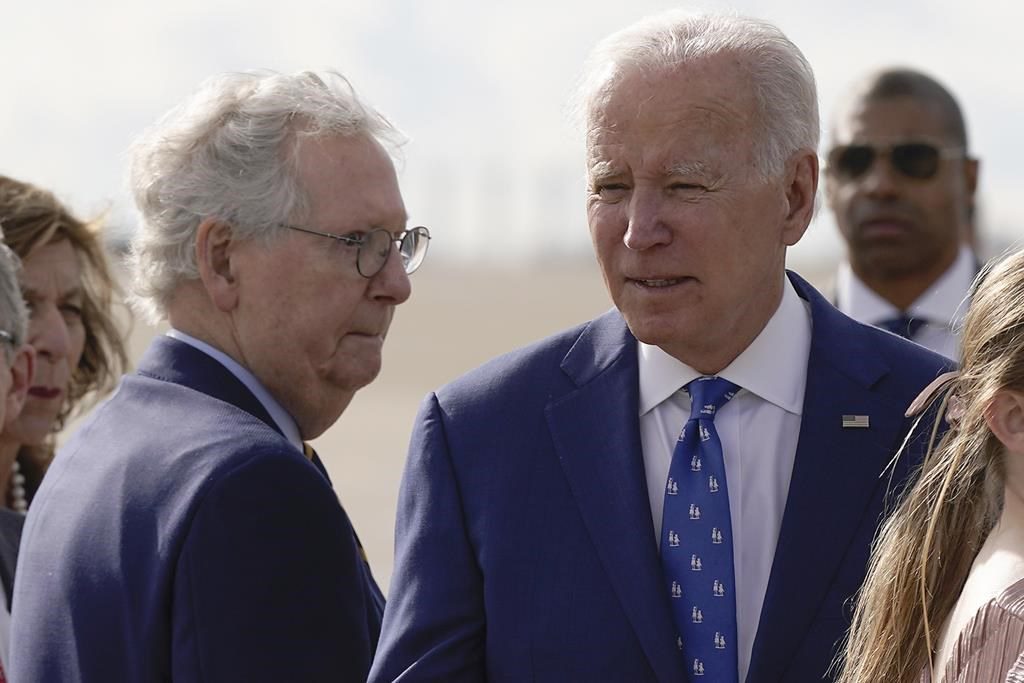 WASHINGTON (AP) — When Joe Biden stepped to the lectern in the shadow of the Brent Spence Bridge in northern Kentucky this month, he couldn’t stop showering praise on the state’s senior Republican senator, who had fought to repair the ramshackle span for decades.

It was quite a contrast to the clipped introduction delivered just a few minutes earlier by that senator, Mitch McConnell, who referenced Biden only in noting that the president had signed the bill to finally fix the aging bridge.

By temperament and manner, the two men — whose relationship in Washington has been scrutinized, analyzed and satirized for years — are decidedly mismatched. Biden is tactile, gregarious and gaffe prone; McConnell is tactical, often grim-faced and rarely utters an unscripted word.

But with the new days of divided government underway, the Biden-McConnell relationship will become more important.

McConnell’s experience in cutting deals and the political capital he retains among Republican members could leave him much freer to negotiate with the White House on thorny matters such as government spending and the debt ceiling than new House Speaker Kevin McCarthy, R-Calif., whose ranks have already issued hardline demands on the debt that the White House says are nonstarters.

Both Biden and McConnell see political imperatives in strategically cooperating. McConnell, who fell short of regaining the Senate majority last November, will have a far more advantageous political map in the 2024 election cycle and wants to demonstrate that Republicans can govern responsibly. Meanwhile, central to Biden’s case for reelection is promoting his policy accomplishments and selling a record of competent governing — punctured somewhat by recent discoveries of classified records at his former office and Delaware home.

“Look, I got elected by the people of Kentucky,” McConnell said in a radio interview Tuesday with Louisville’s 840 WHAS. “I don’t view my job, even though I’m the Republican leader of the Senate, as objecting to everything just because Joe Biden might sign the bill.”

When asked about McConnell after the Kentucky bridge visit, Biden pointed to their joint efforts in the Obama administration to ward off federal fiscal calamities.

“I’ve had a relationship with Mitch McConnell for years,” Biden said. “We’ve always been able to work together.”

McConnell’s acceptance of the White House invitation to attend the bridge event surprised even some of those close to him.

He was among those who greeted Biden on the tarmac at the Cincinnati/Northern Kentucky International Airport. Then McConnell joined Biden in the armored presidential limousine, known as the “beast,” where the two men talked foreign policy and how to keep the international coalition united on Ukraine. Having McConnell ride with the president was not planned in advance, according to an official familiar with the interaction, but it wasn’t a surprise, either.

“On the one hand, it’s easy to overread it,” said Scott Jennings, a veteran Kentucky-based party strategist with close ties to the Republican leader. “McConnell had long said he would be more than happy to work with Biden on policy things that are within what he considers the 40-yard line in American politics, and building a bridge in Kentucky is right in the middle of that field.”

Jennings continued: “On the other hand, I do think there’s a message in that whole event, that there is a basic threshold of governing responsibility that people expect out of a political party, and I do think the Republicans sort of got judged as failing that threshold” at the end of the Donald Trump presidency and with some GOP Senate candidates last year.

Biden and McConnell have demonstrated in the past that they could capably govern when others couldn’t.

Their deal-making through a trio of financial agreements prevented what could have been major economic and political catastrophes. Those agreements temporarily extended the Bush tax cuts in 2010, lifted the debt limit in summer 2011, and in late 2012 avoided the “fiscal cliff” that would have hiked tax rates and enacted steep spending cuts, risking a recession.

“Obviously, I don’t always agree with him, but I do trust him implicitly,” McConnell said in a farewell tribute to Biden on the Senate floor in December 2016. “He doesn’t break his word. He doesn’t waste time telling me why I’m wrong.”

Biden also has found McConnell trustworthy. In a February 2011 speech at the McConnell Center in Louisville, Biden lavished the highest of praise for a congressional leader: “Mitch knows how to count better than anyone else I have ever known.”

Over the years, the interactions between the two men has turned, at times, deeply personal. McConnell was the sole Republican senator to attend the funeral of Beau Biden, the president’s elder son, who died from glioblastoma in 2015. The following year, an emotional Biden presided over the Senate as McConnell, then the majority leader, surprised him by leading the renaming of legislation to bolster cancer research at the National Institutes of Health in Beau Biden’s honor.

That working relationship has been evident throughout the Biden presidency.

As the military in Myanmar was staging a coup in February 2021 and arrested de facto leader Aung San Suu Kyi, the White House put national security adviser Jake Sullivan on the phone with McConnell — who has long advocated on behalf of democracy efforts in the Southeast Asian country — to brief him on the administration’s efforts and to solicit feedback. McConnell has backed Biden on aid to Ukraine even as some Republican lawmakers question continued U.S. support to resist Russia’s invasion.

Still, it hasn’t always been so smooth between the two men during Biden’s first two years.

In January 2022, McConnell took umbrage at a fiery speech that Biden delivered in Atlanta, during which the president compared opponents of Democrats’ voting-law legislation to racist politicians such as the segregationist Alabama Gov. George Wallace and Jefferson Davis, the president of the Confederacy. McConnell called Biden’s remarks “profoundly unpresidential.”

Now, with no major Biden legislative accomplishments on the horizon, McConnell almost certainly will have to be a fixture in negotiating with the White House for the basic tasks of governing.