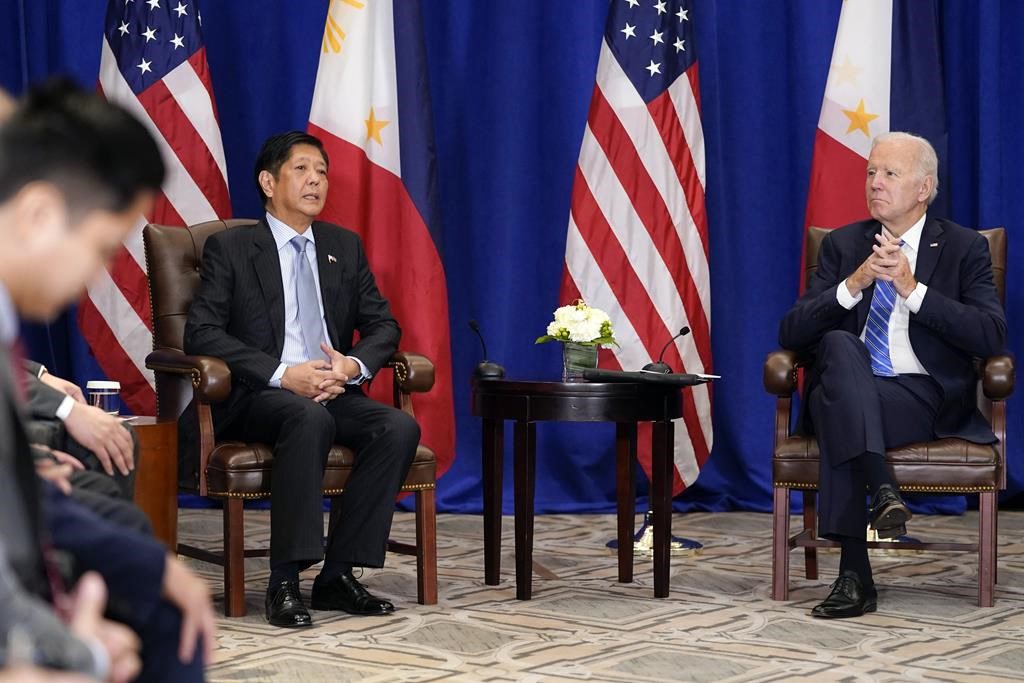 The pair discussed tensions in the South China Sea, the long-standing security relationship between the U.S. and Philippines, the state of the global economy, and other issues. Biden said they would also address human rights. Biden also noted that the Philippines was among U.S. allies to quickly condemn the Russian invasion of Ukraine.

“It’s a critical, critical relationship,” Biden told Marcos at the start of the meeting. “I hope you feel the same.”

The talks come amid heightened tensions between the U.S. and China over America’s Taiwan policy. The United States’ “One China” policy recognizes Beijing as the government of China but allows informal relations and defense ties with Taipei. China claims the self-ruled island as its own.

Marcos, the son and namesake of the country’s former dictator, took office in June. He has said he wants to pursue closer ties with China, which has also sought to court him.

Biden has put a premium on improving relations with Pacific nations in the early going of his presidency as he sees a rising China as the most threatening economic and national security adversary to the United States.

Marcos, for his part, underscored to Biden that the Philippines is “your partners, we are your allies, we are your friends.” He also thanked the U.S. for its “massive” assistance during the pandemic, including sharing COVID-19 vaccines, and for its role in ensuring peace and stability in the Indo-Pacific.

“The role of the United States in maintaining the peace in our region is something that is much appreciated by all the countries in the region, and the Philippines, especially,” Marcos said. He added, “The 100-plus-year-old relationship between the Philippines and the U.S. continues to evolve as we face the challenges of this new century.”

Before Marcos took office earlier this year, Kurt Campbell, coordinator for Indo-Pacific Affairs on the White House National Security Council, acknowledged that “historical considerations” could present “challenges” to the relationship with Marcos Jr. That appeared to be a reference to long-standing litigation in the United States against the estate of his father, Ferdinand Marcos.

A U.S. appeals court in 1996 upheld damages of about $2 billion against the elder Marcos’ estate for the torture and killings of thousands of Filipinos. The court upheld a 1994 verdict of a jury in Hawaii, where he fled after being forced from power in 1986. He died there in 1989.

The elder Marcos placed the Philippines under martial law in 1972, a year before his term was to expire. He padlocked the country’s congressional and newspaper offices, ordered the arrest of many political opponents and activists and ruled by decree.

Marcos Jr. has bristled at critics who have branded his father a dictator. He’s also repeated his father’s justification that martial law was necessary to fight growing Muslim and communist insurgencies. “It was necessary to — in my father’s view at the time — to declare martial law because a war was really raging already at the time,” he said in a recent interview with ALLTV.

The Biden administration has sought to build strong relations with the younger Marcos administration. The two leaders have had good engagement at the cabinet level, according to the White House.