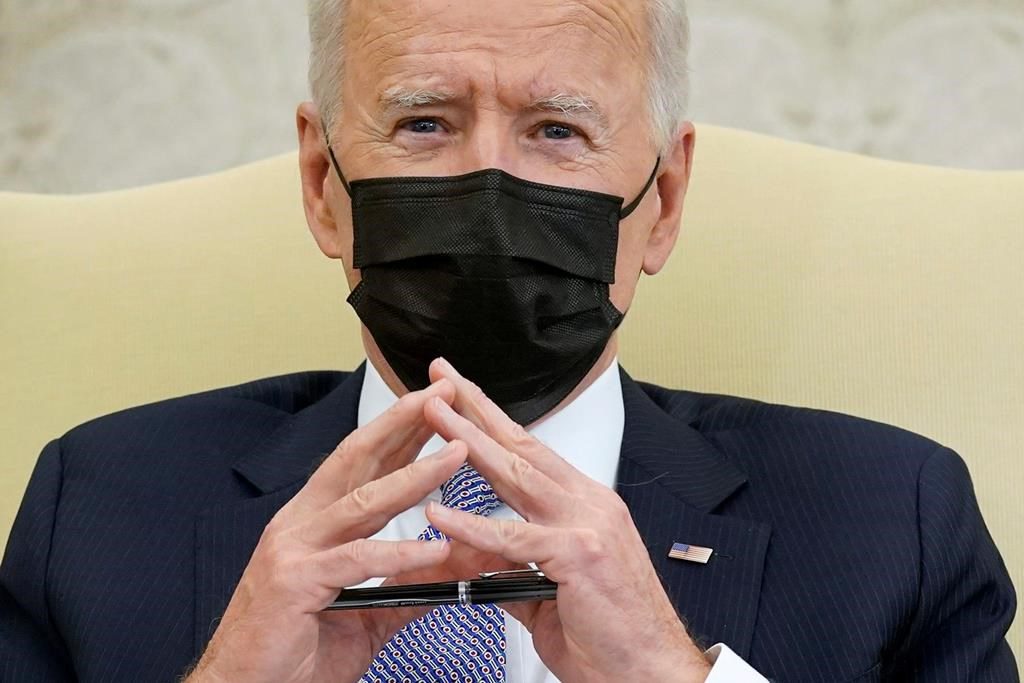 WASHINGTON â€” President Joe Biden has begun publicly courting Republicans to back his sweeping infrastructure plan, but his reach across the aisle is intended just as much to keep Democrats in line as it is a first step in an uphill climb to any bipartisan deal.

Biden's high-profile Oval Office meeting with a bipartisan group of lawmakers on Monday was just one piece of his effort to win over GOP lawmakers, White House aides said. But even if it doesn’t succeed, it could prove useful â€” boxing in Republicans while helping keep the widely disparate Democrats in line. Some moderate Democrats, notably Sen. Joe Manchin of West Virginia, have urged an effort at bipartisanship to pass the $2.3 trillion bill.

And while Biden has made clear, publicly and privately, that he wants Republican support, the White House is also preparing to go it alone, if necessary, to get the bill passed. That would leave the GOP in the politically unpopular position of explaining why it objected to investments many Americans want.

"I'm prepared to negotiate as to the extent of my infrastructure project, as well as how we pay for it," Biden said during Monday’s meeting with lawmakers. "Everyone acknowledges we need a significant increase in infrastructure.”

Biden dismissed the idea his outreach to Republicans is just for show, proclaiming, "I'm not big on window dressing, as you've observed."

In fact, lawmakers left the White House meeting with the understanding that Biden was open to discussion and the president’s team was headed to Capitol Hill to meet with them or any other representatives, as soon as Tuesday.

"Those are all the exact words that I wanted to hear going into the meeting,” Republican Rep. Garret Graves of Louisiana, a member of the Transportation and Infrastructure Committee, said in an interview with The Associated Press. “And so that was really encouraging."

Sen. Alex Padilla, D-Calif., offered, "Nobody stormed out yelling 'no.'"

The White House outreach has been significant, with Cabinet members and allies meeting with lawmakers and activists while also fanning out across the country to sell the plan directly to voters. Officials said that Biden would hold more bipartisan gatherings this month and that top administration officials have meetings planned with more than a dozen congressional committees this week.

But most Republicans have made it clear they have little interest, for now, in joining the effort, rejecting the idea of increasing the corporate tax rate to pay for it. And they have lambasted the proposal as big spending, preferring to stand by and leave Biden to pursue his priority legislation on his own.

Senate Republican leader Mitch McConnell has said the entire package would need to be redone, "completely recrafted," to bring on Republicans. And Sen. Roger Wicker of Mississippi, the top Republican on the Commerce Committee, who was in Monday's meeting, said afterward that "clearly there are parts of this program that are non-starters for Republicans."

Wicker said he told Biden just that in the meeting and characterized the president's response: "Well, he disagrees."

But the White House has expressed confidence that voters won't be sympathetic to a defence that corporations object to their tax rates being raised from 21% to 28% at the expense of broadly popular funding for highways, subways, water pipes, broadband and more.

Cedric Richmond, the White House director of public engagement, said the outreach to lawmakers and business leaders alike has benefited from Biden being perceived as an honest broker who is straightforward with his intentions. Richmond has also stressed to the companies that the 21% rate established by President Donald Trump's 2017 tax cut was above and beyond what they had requested.

"Not one business in six years ever mentioned 21%." Richmond said. "What I'm reminding them of is we would be bringing the rate back to the neighbourhood they wanted in the first place. And at the same time, we could fix infrastructure."

Congress has launched the long slog of legislating, with multiple paths for bringing the package forward for votes.

Democrats hold the slimmest of majorities in Congress, a three-vote margin in the House and an evenly split 50-50 Senate that leaves no room for error as Biden tries to keep party aligned. The party's vice-president, Kamala Harris, can provide a tie-breaking vote in the Senate.

House Speaker Nancy Pelosi has set a July 4 goal for action, but even that seems politically ambitious in the face of the daunting challenges ahead. And for every move the White House makes to win over centrists, including Manchin and Sen. Kyrsten Sinema of Arizona, they risk losing liberals like Rep. Alexandria Ocasio-Cortez, D-N.Y., who wants Biden to reach for an even larger package to meet the nation's needs.

One option Democrats are considering is the so-called budget reconciliation process, which would allow for passage on a 51-vote majority in the Senate, rather than the 60 votes typically needed to overcome a Republican filibuster.

Manchin, in particular, has expressed some queasiness at using reconciliation without an attempt at bipartisanship, making him as much an audience for the White House’s outreach as Republicans. He and others have resisted efforts to change the filibuster rules, but West Wing aides believe that he would be inclined to support reconciliation if he saw that Republicans were stonewalling an attempt at bipartisanship.

"This is another moment to showcase that the Republicans simply want to obstruct all of the Biden agenda," said Dan Pfeiffer, former senior adviser to President Barack Obama. "And the American people want to see you try to be bipartisan but not at the expense of things you support."

Citing his four decades in Washington, Biden campaigned as a bipartisan deal-maker. But Republicans have, to this point, uniformly rejected his efforts. Not a single GOP lawmaker voted for the $1.9 trillion COVID-19 relief bill that Biden signed into law last month despite polling that suggested the measure was popular among Republican voters.

White House press secretary Jen Psaki said Biden’s outreach was sincere: "You don't use the president of the United States' time multiple times over, including two infrastructure meetings, if he did not want to authentically hear from the members attending about their ideas about how to move forward this package in a bipartisan manner."

The West Wing has also pointed to polling that suggests a bipartisan appetite among voters for infrastructure spending, and Biden plans to unveil a second part â€” focused on health and family care â€” in the coming weeks. The White House has telegraphed that far more of this package is open to negotiation than was the case with the COVID-19 bill, but it also set a Memorial Day deadline for showing progress.

"Democrats have set up a proactive effort to make it hard for Republicans to stand and cut the ribbon at a transportation project in their district if they didn't vote for it," said Kevin Madden, senior adviser to Republican Mitt Romney’s 2012 presidential campaign. "That's their effort to pressure Republicans. Can Republicans as a party now keep the same level of unity to oppose it?"