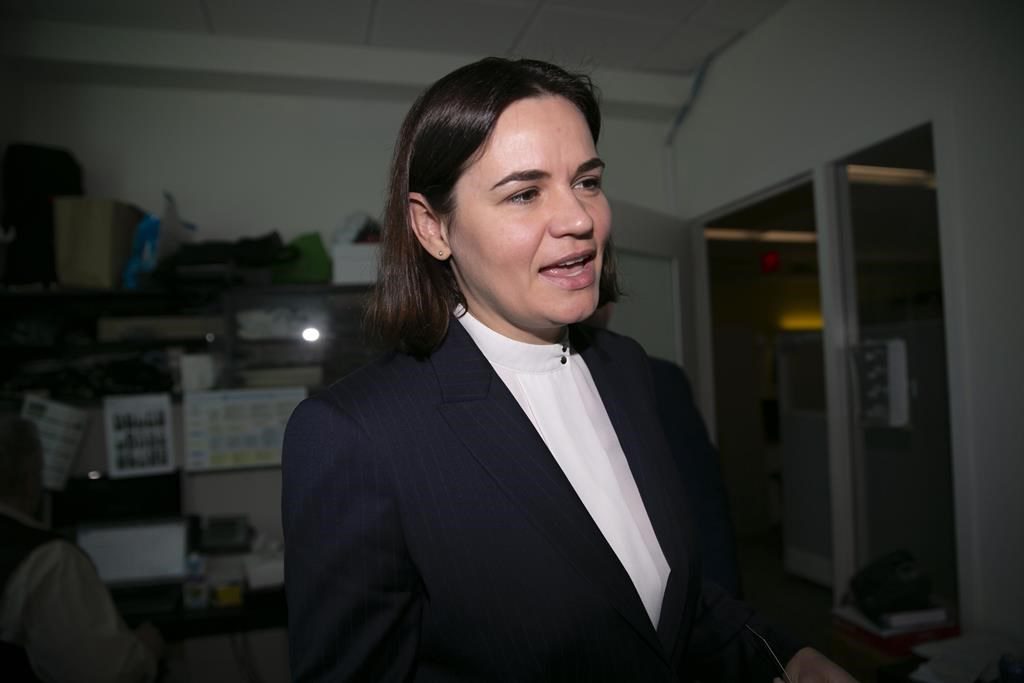 UNITED NATIONS (AP) — The fate of Belarus and Ukraine are “interconnected,” and both countries must fight together to safeguard their very existence because Russia doesn’t view them as independent sovereign states, Belarus’ opposition leader said Friday.

Sviatlana Tsikhanouskaya, who fled to Lithuania after Russian ally Alexander Lukashenko claimed victory in disputed August 2020 elections that many thought she won, said in an interview with The Associated Press that Belarus and Ukraine were once part of the Russia empire and “there will be no free Belarus without free Ukraine.”

As long as Russian President Vladimir Putin is in power, she said on the sidelines of the U.N. General Assembly, there will be constant security threats to Ukraine — and to Belarus’ western border.

Tsikhanouskaya said neither country wants to be part of another Russian or Soviet Empire.

“So Belarus is part of this problem and this problem, this crisis, has to be solved in this context,” said.

Lukashenko had to support Russia after its Feb. 24 invasion of Ukraine, she said, because Putin supported him after the mass protests against the official 2020 election results that gave the Belarus president a sixth term with 80% of the vote.

Since its invasion, Russia has used Belarus as a staging ground to send troops into Ukraine, and Moscow and Minsk have maintained close military ties.

Lukashenko, who has been president since 1994, said last month that Belarus’ warplanes have been modified to carry nuclear weapons in line with its agreement with Russia. And he warned the United States and its allies against carrying out a “provocation” against Belarus, saying “targets have been selected” for retaliation.

Tsikhanouskaya said the war in Ukraine was “extremely unexpected” and some Belarusians are especially opposed to the war “against Ukrainians, our brothers and sisters.”

Tsikhanouskaya said that more than two years since fleeing to Lithuania, the opposition has notched “a lot of achievements” — first and foremost that “people are not giving up” despite the Lukashenko regime’s “terror and repression” and its imprisonment of more than a thousand political prisoners, including her own husband.

The opposition “managed to build a coalition of democratic countries who are fighting alongside with us, fighting this regime, creating multiple points of pressure,” she said.

There are now six packages of sanctions, pushed for by the opposition, against the Lukashenko regime. The sanctions have put stress and pressure on the president, making him focus solely on remaining in power instead of what’s best for the country, she said.

Tsikhanouskaya said Lukashenko and his followers are adept at circumventing sanctions, using third parties. One way to prevent this is having the European Union follow the United States and impose secondary sanctions, she said.

She urged the international community to both keep up pressure against Lukashenko — suggesting new sanctions on Belarus’ exports of wood, potash and steel — and help Belarusian civil society, including human rights defenders, “people of culture, politicians who are fighting with this regime so as to have the energy to continue.”

Thousands of people have been imprisoned since Feb. 24 for opposing the war in Ukraine, she said, praising saboteurs who disrupted rail traffic heading from Russia to Ukraine through Belarus and who sent information about shipments to the Ukrainian military, an act that risked the death penalty.

“People are scared, of course,” Tsikhanouskaya said. “We live like in a gulag actually in Belarus, but people have this energy to continue.”

The opposition has organized something like a government in exile, Tsikhanouskaya said. Thanks to technology, she said she can communicate with people in Belarus, and now they are staying “in safe mode,” ready for a “new wave of revolution when the moment comes.”

She predicted that there will be a “window of opportunity” for the Belarus people, likely connected with victory in Ukraine, but nobody knows how long it will take.

Tsikhanouskaya stepped in after her husband, Siarhei Tsikhanouski, was arrested two days after he declared his candidacy for the 2020 presidential election. The popular video blogger and activist known for his anti-Lukashenko slogan “Stop the cockroach” was sentenced last December to 18 years in prison on charges widely seen as politically motivated.

She said her husband has been in a tiny punishment cell for more than a month, adding that conditions for political prisoners are far worse than for ordinary criminals. She fears for him and for thousands of other political prisoners as winter approaches as the temperature inside their cells is no warmer than the outdoors.

Tsikhanouskaya said she came to the annual meeting of world leaders to give voice to the people “who are fighting the dictatorship” and to urge that Lukashenko be held accountable for his crimes.

Edith M. Lederer is chief U.N. correspondent for The Associated Press and has been covering international affairs for more than half a century. For more AP coverage of the U.N. General Assembly, visit https://apnews.com/hub/united-nations-general-assembly.