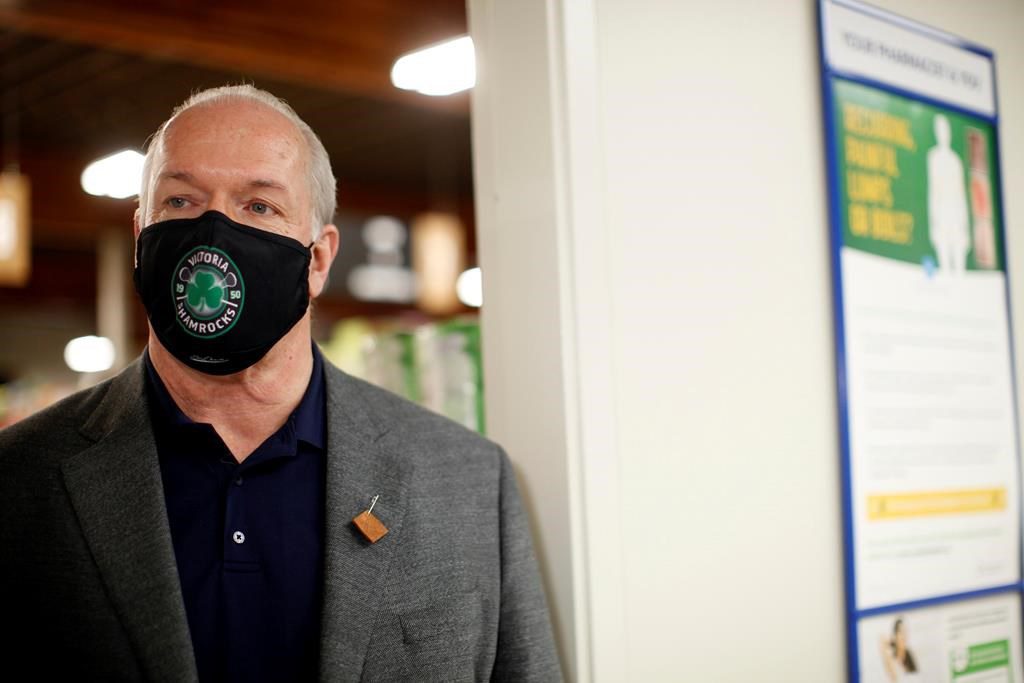 VICTORIA â€” British Columbia will impose travel restrictions to prevent movement outside of health regions as police set up roadside checks similar to those seen during the Christmas season, Premier John Horgan said Monday as he pleaded with residents to “do the right thing.”

The government has been working with the tourism industry and BC Ferries to cancel bookings that have been made and to not accept new ones from people living outside their intended destination, Horgan told a news conference.

The province is also extending measures that ban indoor dining and adult activities at gyms for another five weeks, matching the length of the travel restrictions.

“If you live in the Fraser Health area, by all means take a few days, get outside, perhaps go to a campground in your local area. But do not try and book somewhere outside of your area. The tourism operator in that community will not book you,” Horgan said.

Horgan added that signs will also be posted at the boundary with Alberta to reduce non-essential travel between the two provinces.

Horgan said travel restrictions involving police will not be like those that were walked back in Ontario last week that could have seen pedestrians and motorists stopped during lockdowns and asked where they live.

"We're not going to follow other provincial leads and bring forward proposals that can't be enforced or, quite frankly, reduce confidence in our objective here, which is to collectively say let's redouble our efforts, let's bear down for the next five weeks so that we can have the summer that all of us desperately, desperately want."

However, the province is prepared to bring in a public health order banning all non-essential travel if people do not voluntarily follow the restrictions to reduce the burden on overwhelmed hospital staff, Horgan said.

“Most importantly, I want people to think about those nurses and those care aides and those doctors and all of the people on our front lines who have been giving every single week, every single month, for over a year to keep British Columbians safe. We cannot thank them enough.”

Provincial health officer Dr. Bonnie Henry said a child under age two was among the eight people who died of COVID-19 since Friday, for a total of 1,538 deaths from the virus.

“It is a true tragedy and it’s a reflection of the impact this virus is having across our community,” she said of the child who had some pre-existing issues and died at B.C. Children’s Hospital.

Another 2,960 people tested positive for the virus in the last three days, bringing the total number of cases in B.C. to 120,040.

Henry said some restaurants and bars have pushed the limit by seating large numbers of people on patios and some gyms have also not been following restrictions during a three-week period that she extended until after the long weekend in May.

While people have been encouraged to gather outdoors in groups of up to 10 in their bubble, it’s concerning that some have skirted those guidelines, she said.

B.C. will join Ontario, Alberta and Manitoba in providing the Oxford-AstraZeneca vaccine to people aged 40 and up, instead of starting at age 55, Henry said.

“It’s now become clear that the risk of very rare blood clots associated with vaccination (with AstraZeneca) is in the range of about four in a million,” Henry said. “We need to put that in the context of what we are seeing across our province right now where COVID transmission rates are very high in many communities and the risk of hospitalization from COVID is about two to four in 100 for most people.”

Starting this week, the province will also use AstraZeneca to target vaccination in 13 high-risk communities, mostly in the Fraser Health region.

â€” By Camille Bains in Vancouver