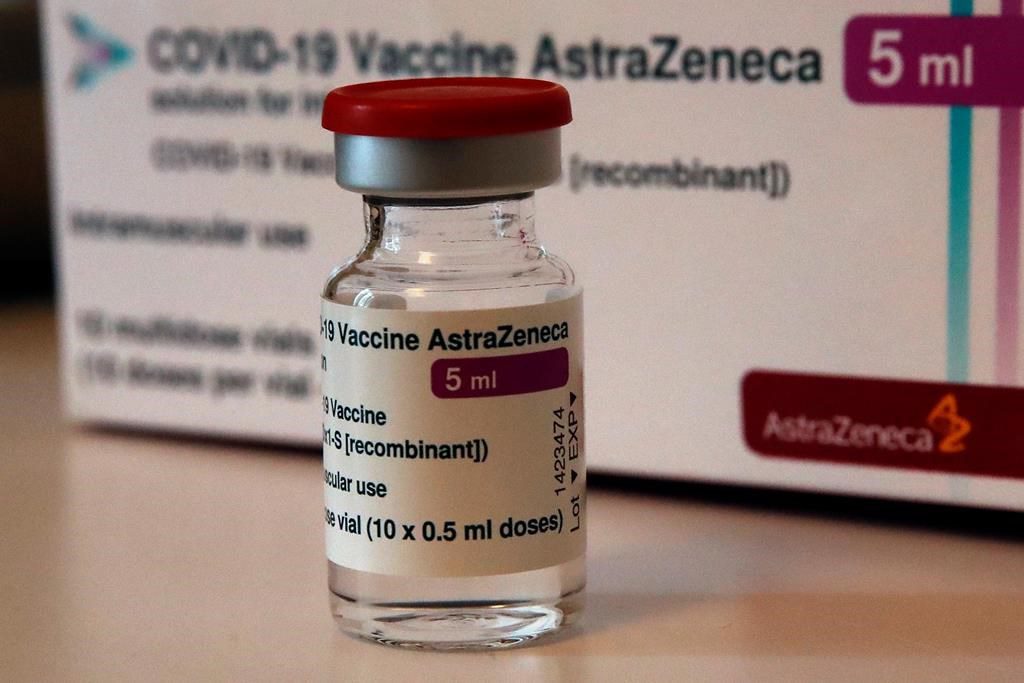 OTTAWA â€” There is enough evidence to say the Oxford-AstraZeneca vaccine may cause very rare blood clots but the shot is still extremely safe, very effective and will remain on the Canadian market, Health Canada said Wednesday.

The department’s regulatory team is updating the vaccine’s label with information about the possibility of clots but only a patient who developed the new vaccine-induced blood clotting syndrome is advised not to get another dose of it.

“Health Canada still considers the benefits of the AstraZeneca vaccine to outweigh the risks of getting COVID-19,” said Dr. Supriya Sharma, the chief medical adviser at Health Canada who manages the regulation of the COVID-19 vaccines.

“We are not limiting the use of the vaccine to any specific age group or sex.”

The National Advisory Committee on Immunization, which recommended March 29 that AstraZeneca not be used on patients under 55, will now meet to decide if that advice should be updated.

NACI issued a statement Wednesday afternoon saying it will update the guidance “soon” but for now the age recommendation stands.

All provinces agreed to follow that advice, which was based on the fact early reports showed women under 55 were getting clots more often, and the risk of COVID-19 is higher as you age.

The U.K. regulator recently said, like Health Canada, that the vaccine remained safe for everyone, but the British version of NACI recommended it not be given to people under 30, who have the lowest risk for severe illness from COVID.

Denmark on Wednesday became the first country to decide to stop using AstraZeneca entirely as a result of the clots.

The clotting syndrome has been labelled VIPIT, short for vaccine-induced immune thrombotic thrombocytopenia. It occurs when the body’s immune system begins to attack blood platelets, leading to clots, and is treatable.

Canada has had one VIPIT case reported â€” a Quebec woman older than 55.

The number of doses given was 480,000 as of April 3. The figure is likely much higher now, as Canada has received more than 2.3 million doses of the vaccine produced in the United States, India and South Korea. But Sharma said Health Canada’s analysis looked only at the 480,000 shots.

“These are extremely, extremely rare,” she said.

“The risk of … regular clots with COVID is much, much, much higher.”

Blood clots are also much riskier when taking certain medications, including birth control. About one in 1,600 patients on the pill will develop a clot.

COVID-19-caused clots are not the same as those caused by VIPIT, but one in five patients hospitalized with COVID-19 will develop a clot, and for patients who end up in critical care, the risk is one in three.

There are also other risks from COVID-19, including death, and Sharma said the balance between risks of a vaccine weighed against the risks of COVID-19 heavily fall towards the virus being a much bigger risk.

She also noted that VIPIT is very similar to clots caused in a very small number of people given the blood-thinning drug Heparin.

“We still have Heparin on the market,” Sharma said. “We still use it for prevention. We use it in syringes, for example, to prevent clots, even though there might be alternatives to it.”

The issue of blood clots extended to the Johnson & Johnson vaccine this week, which uses the same technology as AstraZeneca but has a different formula.

The United States on Tuesday temporarily stopped using J&J because six patients developed clots, after 6.8 million doses were given. The pause was largely intended to provide time to get information to medical providers about what to look for and ensure treatments are known.

Sharma said Canada is continuing to look at the J&J evidence as well.

J&J is not moving to roll out the vaccine in Europe pending more information from the United States but a spokesman said Wednesday there are no plans to stop it in Canada at the moment.

Sharma said Health Canada is updating the warning label on the AstraZeneca vaccine to include the potential for clots, the symptoms to look for and the treatments to provide.

Sharma said Canadians should look to the case in Quebec, which was picked up and treated, to gain confidence that the monitoring system is working as it should.

“Our best advice to Canadians is always the same but possibly more urgent now than ever, with cases of COVID-19 increasing across Canada,” Sharma said. “Get whichever vaccine is available to you. It’s that simple. The longer you wait to get vaccinated, the longer you’re not protected.”