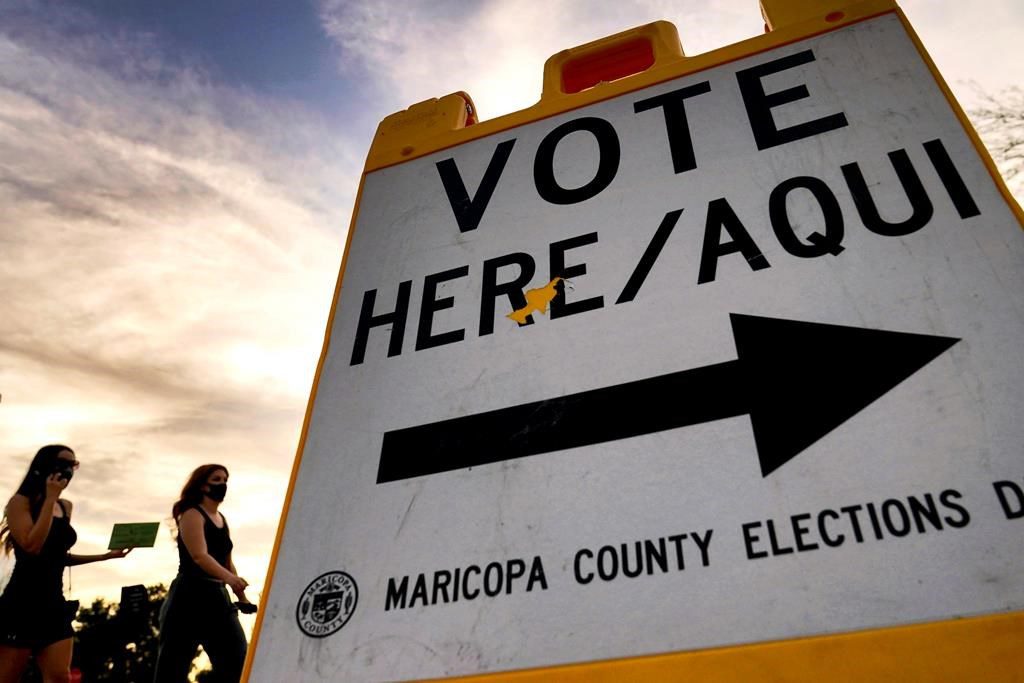 "I don't like to be characterized as supporting discriminatory laws!" she told Democrats, who say the legislation will hurt Latino and Native American voters.

"And," he continued, "we're going to continue bringing this up."

Indeed, Democrats are escalating their charges that the Republican push for tighter state voting laws is designed to make it hard for people of colour to vote. As the fight moves from the Deep South to the Southwest, that’s put increased focus on the impact the proposals would have on Latino and Native American voters â€” groups with distinct histories of fighting for voting rights.

"Arizona, Texas and several states in the Southwest have a long, sordid history of voter suppression, not only against African Americans but Latinos," said Domingo Garcia, president of the League of United Latin American Citizens. Fighting the new voting bills, he added, "is our No. 1 priority."

But Republican lawmakers, after seeing how Democrats successfully labeled GOP-backed legislation in Georgia as racist, are fighting back. They blasted Democrats for what they say are lies about the plans. Texas Republican Lt. Gov. Dan Patrick last week accused opponents of "borderline race baiting."

The debate comes amid a broader battle for the allegiance of Latino voters. While most Latinos overall lean Democratic, then-President Donald Trump, a Republican, made gains among Latinos last year. Some Democrats see the voting debate as a chance to win over those voters.

Republicans across the country have made hundreds of new proposals to tighten voting and election laws â€”reacting to Trump’s false insistence that he was denied reelection because of voter fraud. Trump and his supporters lost more than 50 court cases challenging the election, and repeated audits turned up no significant fraud. But Trump has continued to claim widespread wrongdoing.

The first major legislative fight came in the swing state of Georgia, where Republican lawmakers proposed, among other measures, ending early voting on Sundays, when many Black voters cast ballots. That provision was dropped from the final law, but President Joe Biden, a Democrat, still condemned the measure as "Jim Crow in the 21st century,” a reference to the laws that Southern states once used to keep Black citizens from voting.

Arizona and Texas, both weighing new voting laws now, have their own history of racial discrimination at the ballot.

Today, Republican proposals under consideration in Texas target the state’s diverse and Democratic cities. The bills would limit polling places in counties of more than 1 million people using a formula that includes the number of eligible voters per region. That could lead to longer lines to cast ballots, particularly in immigrant-heavy areas. All local election officials would be forbidden to make voting easier by sending mail ballot applications to voters or creating "drive-through" voting locations. Partisan poll watchers would be allowed to videotape voters, all the way up to, but not including, when they fill out their ballots.

None of the legislation explicitly mentions race, but voting rights groups note that there’s a long history of using what seems like race-neutral voting restrictions that fall hardest on voters of colour.

"These bills are very much about race. They use language that has historically been associated with racist election measures," said Nina Perales, vice-president of litigation at the Mexican American Legal Defence and Educational Fund.

Texas was one of the hubs for a phenomenon that surprised many analysts in November: a shift of Latino voters into Trump’s column. Though the majority of Texas Latinos still voted Democratic, the shift to the right was noticeable, particularly in rural areas. An analysis by the Democratic group Equis Research found that Trump gained 12 percentage points in the largely Hispanic Rio Grande Valley.

That analysis also found that Trump gained ground in heavily Latino precincts in Arizona, but less so than in other parts of the country.

Now Democratic-aligned groups are hoping the new voting push gives them an opening with Latinos who leaned toward Trump.

"If their vote was so important to these legislators, if their voice, if their opinions, if their perspectives, were so important to these legislators, then why are they passing bills that specifically makes it more difficult for their vote to be counted?” asked Gloria Gonzales-Dholakia, executive director of the Hispanic advocacy group Jolt Action. It plans to discuss the voter restrictions with Latinos during upcoming outreach.

In Arizona, there are two main voting bills on the table. The first would remove people from the state’s mail-voting list if they have missed two consecutive election cycles and don’t respond to a postcard notification. Democrats say that of the 150,000 voters who would be at risk of being removed because of this legislation, as many as one-third are Latino.

The other main voting proposal would require a voter to have a driver’s license number to cast a mail ballot â€” or, for those without it, a voter identification number. But in some Arizona counties, that is only available with a driver’s license number. Activists and Democrats argue that Latinos and especially Native Americans â€” a key Democratic voting bloc in the state â€” are less likely to have licenses.

Latino groups such as Mi Familia Vota and Poder Latinx have condemned the proposals as racist, and activists have testified repeatedly in the Arizona Legislature â€” sometimes so heatedly that they’ve been shut down by Republicans for allegedly violating parliamentary rules against impugning the integrity of lawmakers.

Republican Rep. John Kavanagh, chair of the Arizona House of Representatives’ Government and Elections Committee, said that the ID number bill is being rewritten and that there’s no racist intent from his side of the political aisle. He noted that Republicans killed many of the most controversial proposals, including one to disqualify mail ballots that arrive after the Friday before Election Day and one that would have let the Legislature override the will of the voters and select the state’s electors in a presidential race.

He said the legislation to remove people from the mail list would only trim voters who may have moved or died. "Their Jim Crow argument is not true and is a vicious political lie to deceive the public," Kavanagh said of Democrats.