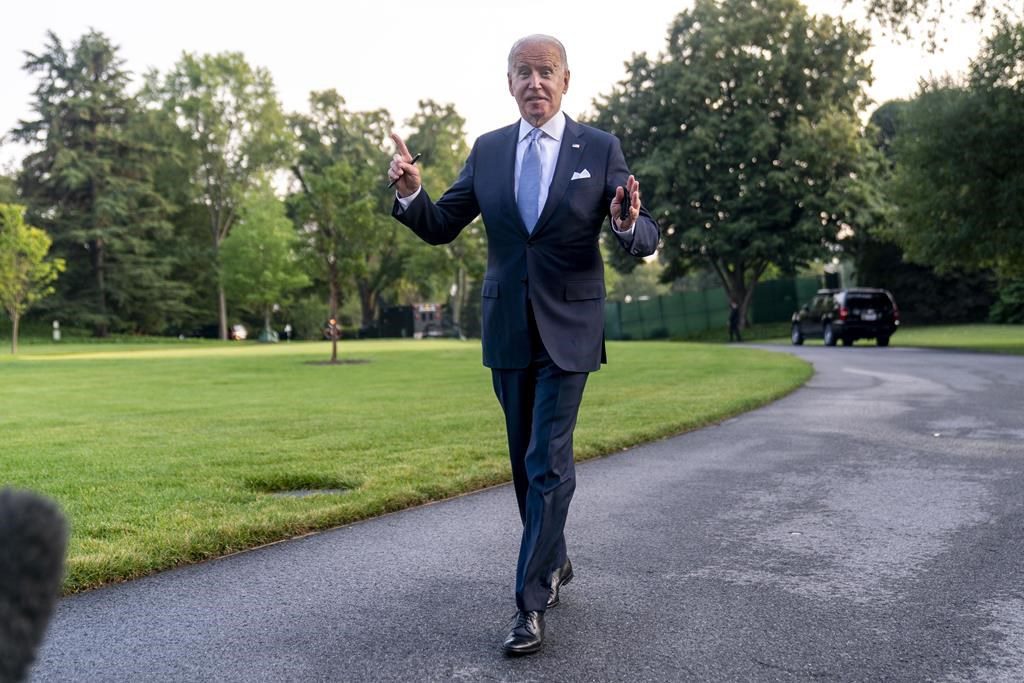 WASHINGTON (AP) — Six months into Democrats’ unified control of Washington, most Democrats are on board with President Joe Biden and where he’s trying to take the country — even if they’re divided on how to get there.

A new poll from The Associated Press-NORC Center for Public Affairs Research finds 6 in 10 Democrats say they’re optimistic about their party’s future, and Democrats nearly universally — 92% — approve of the way Biden is handling his job. The Democratic president is viewed favorably by both liberals and moderates.

The numbers reflect a division playing out on Capitol Hill, as Biden and other Democratic leaders prioritize a bipartisan infrastructure bill over other Democratic initiatives less ripe for compromise — including voting rights, immigration and climate change. Although Biden has faced criticism over the strategy, the numbers suggest even displeased Democrats aren’t turning on him.

“He’s started an agenda that, if he succeeds, will move us forward so much and help most people,” said Anjanette Anderson, a 47-year-old Democrat in Fort Walton Beach, Florida.

But Anderson argued party leaders shouldn’t let Republican opposition slow them down. “Republicans didn’t want to work across the aisle time and time again,” she said of recent years. “If we’re going to continue to move in a direction that helps the many instead of the few, Democrats are going to have to push.”

Despite the strong approval for Biden and two-thirds of Democrats saying the country is headed in the right direction, the poll finds 53% of Democrats say they are pessimistic about U.S. politics generally. Just 27% say they are optimistic, while another 19% hold neither view.

Interviews with Democratic voters show those concerns are rooted in a deep distrust of Republicans, especially in the wake of the Jan. 6 attack on the Capitol by supporters of then-President Donald Trump as Congress convened to certify Biden’s victory.

Those Democrats cast the GOP as a threat to democracy. They pointed especially to Republican obstruction of federal election and voting rights bills, the lack of GOP participation in an official inquiry into the Jan. 6 insurrection and the struggle to pass an infrastructure program — though a bipartisan breakthrough on infrastructure could now be on the cusp of clearing the 50-50 Senate.

“We could have another Jan. 6 kind of event” after the next presidential election, Anderson said. “Or we could have states that just say, ‘Hey, we know how our people voted, but we’re going to give our electoral votes to another guy anyway.’ That’s scary.”

The poll comes after a relative honeymoon period at the outset of Biden’s presidency. Democrats passed a nearly $2 trillion pandemic response package without any Republican votes, and the administration, working with state governments, dramatically expanded distribution of COVID-19 vaccines developed while Trump was in office.

Democrats interviewed by the AP cited those accomplishments, along with displacing Trump’s bombastic leadership style, as reasons for their optimism about the party.

Diana Hilburn, a 56-year-old in College Park, Georgia, a suburb of Atlanta, praised the health insurance aid included in the American Rescue Plan.

“I was able to get on an exchange plan because of that,” she said, recounting how she lost health insurance after being laid off as an Atlanta airport shuttle driver at the outset of the coronavirus pandemic. She didn’t qualify for Medicaid because Georgia is one of 12 Republican-run states that still hasn’t expanded Medicaid since Democrats passed the Affordable Care Act in 2010.

Hilburn hasn’t been rehired for her driver job yet, but she’s confident about the economy long term and Democrats’ stewardship of it. Still, she warned there’s no guarantee of success for all Americans, including those who’ve found work.

“Everything’s picking up, but so many places want to pay $9 an hour, $10 an hour — and my rent is up to $650 a month. A lot of folks have to pay more than that,” she said of businesses around her in Clayton County.

That’s why Hilburn doesn’t think Democrats should waste time trying to compromise with Republicans in Congress. She noted that Democrats want to raise the minimum wage to $15 an hour but face GOP opposition and that many Republican governors, including her own, suspended weekly unemployment insurance boosts Congress initially approved during the pandemic.

“Do what they’ve been doing to us. Just move it through,” said Hilburn, noting Sen. Mitch McConnell’s success in blocking Democratic priorities as minority leader and speeding through judicial confirmations when he had a GOP Senate majority. “Voters,” Hilburn said, “will understand” a Democratic turnabout.

“We’re just so angry and divided and partisan,” said Staab. Democratic leaders should “have hard deadlines” for “good-faith negotiations,” he said, but “you have to put out the olive branch.”

So far, Democrats remain positive in their assessments of the party’s leadership on Capitol Hill. Besides high ratings for Biden, 81% of Democrats have a favorable view of Vice President Kamala Harris. They’re more likely to have a favorable than unfavorable opinion of House Speaker Nancy Pelosi (67% to 23%) and Senate Majority Leader Chuck Schumer (53% to 16%).

Party faithful, meanwhile, more harshly assess Sen. Joe Manchin, the West Virginia Democrat who opposes changing the Senate filibuster rule that allows Republicans to block any bill that doesn’t have 60 votes. A third of Democrats view Manchin negatively, compared with about 2 in 10 with a positive view; about half say they don’t know enough to say.

“It’s one thing to watch the Republicans do this, but now we have Joe Manchin out there basically helping them,” said Walter Russell of Olanta, South Carolina, referring to the blockade of Democrats’ agenda.

A 70-year-old military veteran, Russell described himself as a moderate but argued the GOP has escalated its opposition beyond acceptable levels. “I don’t understand how Manchin doesn’t see that,” he said.

But in Manchin’s home state, Baron Walker, a 43-year-old Democrat from Davisville, summed up the political calculations that Democrats are depending on: Democratic voters aren’t likely to blame them first.

Walker is critical of Manchin but far more so of Republicans. Lies about the results of the 2020 elections have done “lasting damage” to democracy, he said.

“There’s so many conspiracy theories around everything,” he said.

And no matter how disappointed he is with Manchin, Walker said that’s his only option in West Virginia. “I don’t see any scenario where I’d vote anything other than Democrat,” Walker said, “including staying home.”

The AP-NORC poll of 1,308 adults was conducted July 15-19 using a sample drawn from NORC’s probability-based AmeriSpeak Panel, which is designed to be representative of the U.S. population. The margin of sampling error for all respondents is plus or minus 3.7 percentage points.