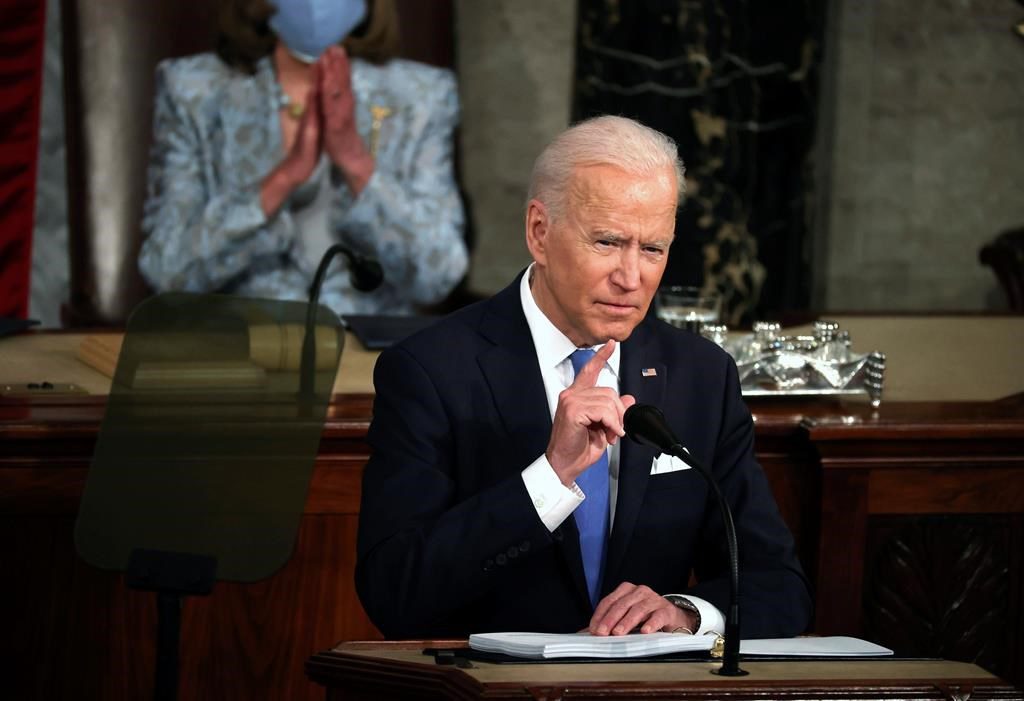 WASHINGTON â€” Taking a swipe at his predecessor, President Joe Biden gave a distorted account of the historical forces driving migrants to the U.S. border, glossing over the multitudes who were desperate to escape poverty in their homelands when he was vice-president.

In his speech to Congress on Wednesday night, Biden also made his spending plans sound more broadly supported in Washington than they are.

The Republican response to Biden's speech departed from reality particularly on the subject of the pandemic. Sen. Tim Scott of South Carolina tried to give the Trump administration credit for turning the tide on the coronavirus in what was actually the deadliest phase.

A look at some of the claims:

BIDEN: "If you believe in a pathway to citizenship, pass (immigration legislation) so over 11 million undocumented folks, the vast majority who are here overstaying visas, pass it."

There is no official count of how many people entered the country legally and overstayed visas. The government estimates that 11.4 million were living in the country illegally as of January 2018 but doesn't distinguish between how many entered legally and stayed after their visas expired and how many arrived illegally.

Robert Warren of the Center for Migration Studies of New York, a former director of the Immigration and Naturalization Service's statistics division who has studied visa overstays for decades, has done the most recent work on the issue. He estimated that, as of 2018, 46% of people in the country illegally overstayed visas â€” not a majority, let alone a "vast majority."

BIDEN: "When I was vice-president, the president asked me to focus on providing help needed to address the root causes of migration. And it helped keep people in their own countries instead of being forced to leave. The plan was working, but the last administration decided it was not worth it. I'm restoring the program and I asked Vice-President Harris to lead our diplomatic effort to take care of this."

In March, the number of unaccompanied children encountered by U.S. border authorities reached nearly 19,000, the highest number on record in the third major surge of families and children from Central America since 2014 under both Democratic and Republican administrations.

Biden championed aid during what Obama called "a humanitarian crisis" of Central American children at the border in 2014. But while assistance fell under Trump, hundreds of millions of dollars have flowed in every year. Biden has proposed $861 million in Central American aid next year as a first installment on a $4 billion plan, compared with annual outlays of between $506 million and $750 million over the previous six years.

BIDEN, on his economic proposals: "There's a broad consensus of economists â€” left, right, centre â€” and they agree that what I'm proposing will help create millions of jobs and generate historic economic growth."

THE FACTS: He's glossing over the naysayers. Some economists, also bridging the ideological spectrum, say he's spending too much or in the wrong way. Biden's pandemic relief plan did enjoy some bipartisan support, even getting a general seal of approval from Kevin Hassett, who was Trump's chief economist. But his policies have also drawn bipartisan criticism.

For one, Larry Summers, who was Barack Obama's top economist and Bill Clinton's treasury secretary, warned that Biden's relief package risks rates of inflation not seen in a generation.

Biden's latest proposals on infrastructure and families would require substantial tax increases on corporations and wealthy investors â€” leading to criticism by many CEOs and more conservative economists that growth could be compromised. Biden's economics team says the resulting programs and infrastructure would boost growth.

The plan to increase capital gains taxes drew the scorn of Douglas Holtz-Eakin, a former director of the Congressional Budget Office and Republican adviser. He said the White House is wrong to focus on the sliver of people being taxed and what matters is how much of the economy would be taxed.

"The wealth taxes are a draconian tax on the annual return to that capital," he said. "What matters is the amount of economic activity that is taxed, not the number of people."

BIDEN: "We kept our commitment, Democrats and Republicans, sending $1,400 rescue checks to 85% of all American households."

THE FACTS: Republicans made no such commitment.

Republicans in both the U.S. Senate and House opposed the bill containing the $1,400 stimulus checks, known as the American Rescue Plan, portraying it as too big and too bloated.

All but one Democrat supported the legislation.

While no Republicans voted for this year's coronavirus bill, they supported sending checks to Americans in previous rounds of relief legislation. A relief law passed with overwhelming bipartisan support in December, when Trump was still president, provided $600 checks to many Americans.

Some Republicans have boasted to their constituents about programs created by the coronavirus bill despite voting against it.

THE FACTS: That may be a bit of wishful thinking.

Under House Speaker Nancy Pelosi's bill, private insurers that cover working-age Americans and their families would indeed be able to get the same discounts as Medicare. But while Pelosi should be able to drive her legislation through the House, the situation in the Senate is different.

If just a few Democratic senators have qualms about her expansive approach, Biden may have to settle for less. So there's no guarantee that a final bill would lower prescription drug costs for everyone.

SOUTH CAROLINA SEN. TIM SCOTT: "This administration inherited a tide that had already turned. The coronavirus is on the run! Thanks to Operation Warp Speed and the Trump administration, our country is flooded with safe and effective vaccines."

THE FACTS: That's a real stretch.

Biden took over in the midst of the winter wave of COVID-19, the worst to hit the nation. It's true that cases and deaths had begun to decline from their peak in the second week of January, but the tide had far from turned. Daily cases were averaging more than three times higher than they are now.

And while the Trump administration shepherded the delivery of two highly effective vaccines, the supply of doses was short of meeting demand and several state governors were complaining about jumbled signals from Trump’s team.

Trump was focused on his campaign to overturn the election results and did not devote much public attention to the pandemic as his term came to an end.

SCOTT: "Just before COVID, we had the most inclusive economy in my lifetime. The lowest unemployment rates ever recorded for African Americans, Hispanics and Asians. And a 70-year low nearly for women. Wages were growing faster at the bottom than at the top â€” the bottom 25% saw their wages go up faster than the top 25%. That happened because Republicans focused on expanding opportunity for all Americans."

THE FACTS: His statistics are selectively misleading.

Nothing is false on its face in terms of numbers. Yet the gains reflected the longest expansion in U.S. history â€” something that started during Obama's administration and simply continued under Trump without much change in growth patterns.

Scott also neglects to credit the Federal Reserve, which kept interest rates near historic lows to support growth and keep the recovery from the Great Recession going.

EDITOR’S NOTE â€” A look at the veracity of claims by political figures.