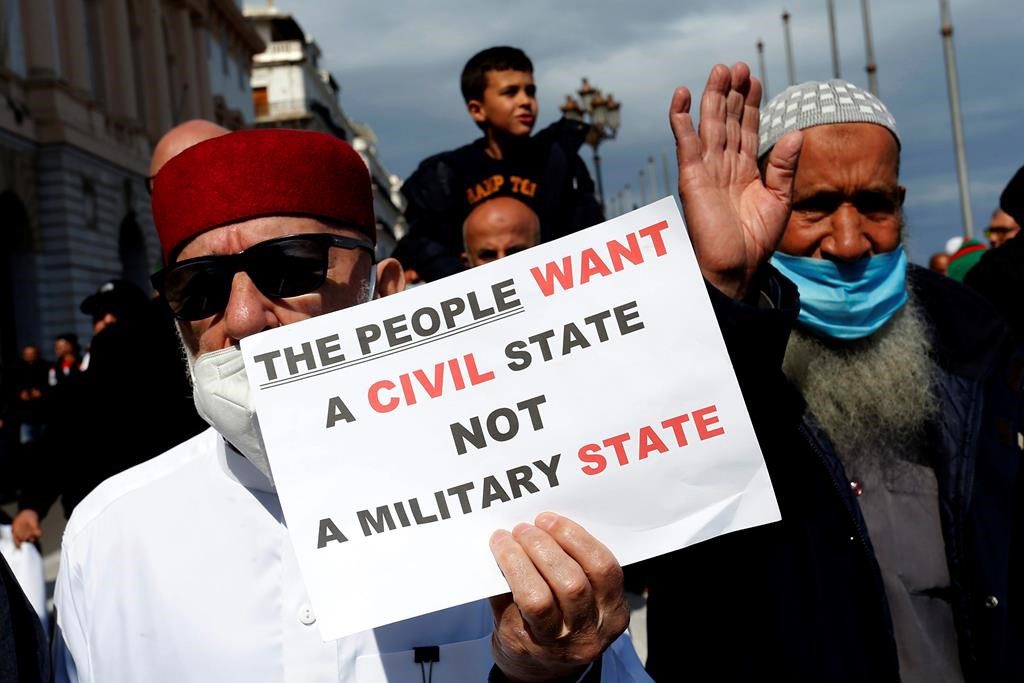 ALGIERS, Algeria â€” Algeria’s pro-democracy movement is at a crossroads two years after it ousted the country’s long-serving leader, confronting fears it’s been infiltrated by a group with links to an Islamist party outlawed during a dark era of strife in the 1990s.

Members of the Europe-based Rachad group cannot be clearly identified, nor do they advertise their presence. But it’s widely believed that they are among the thousands of protesters of the Hirak movement marching each Friday. Algeria’s president and its powerful military have castigated Rachad, without naming it.

The Hirak movement forced President Abdelaziz Bouteflika from office in 2019 with its giant weekly protests peacefully demanding change in Algeria’s opaque power structure in which the army plays a crucial shadow role. Protesters began pouring anew into the streets of Algiers, the capital, and other cities starting on Hirak's second anniversary, Feb. 22, after a year of virus lockdown.

But they’re now less numerous amid concerns that Rachad may be using Hirak’s "smile revolution" for an agenda of its own. Debate about Rachad focuses on whether it could reopen the door to the dark past when Algeria waged a murderous war with Islamist extremists seeking power. An estimated 200,000 people were killed, and the nation has yet to heal.

On its site, Rachad says it has taken part in Hirak marches since their inception in early 2019, and affirms that it "banishes all forms of extremism … and advocates non-violence."

Such claims don't convince Ahcene Khaznadji, a 65-year-old teachers' unionist who took part in about 30 Hirak marches â€” and says he won't do it again.

The marches "have reached their limit," he said. "Above all, it increasingly appears that Islamists are trying to take over, via Rachad. I fought Islamists when in university in the 1980s and, politically, in the 1990s," Khaznadji said. "Today, I don't want to serve as a stepping stone to help them reach power."

Rachad, whose origins date to 2007, is widely seen as Islamic-conservative. Two of its leaders, based in Geneva and London, were members of the Islamic Salvation Front, or FIS, party whose soaring popularity triggered the years of chaos. On the verge of winning national elections in 1991, FIS was outlawed, a military junta took over Algeria and the insurgency by extremists spiraled into all-out war.

Conspiracy theories have long abounded in Algeria. In the case of Hirak, where some see exaggeration about the role of Rachad, others see dark plots promoted by authorities. A constant slogan chanted or scrawled on posters during Friday marches has been "civilian, not military state." For the army, that’s a deep insult to its "eternal link" with the people and a sign that Rachad is among protesters.

President Abdelmadjid Tebboune has portrayed himself as a protector of what he has called the "blessed Hirak," but critics suspect authorities may be out to divide protesters with fear-mongering about Rachad coupled with multiple arrests of marchers during protests.

The March issue of the army's monthly review, El Djeich, referred to Rachad, without naming the group, as "bats who prefer obscurity and darkness." In its April issue, it denounced those who "seed doubt and lies and rumours."

Last week Tebboune castigated what he said were "subversive activities" by "illegal movements close to terrorism … exploiting weekly marches," a clear reference to Rachad. The statement after a meeting of the High Security Council, carried by the official APS news agency, also condemned "separatist circles," a reference to another group seeking independence for Algeria’s Kabyle region, home of Berbers.

Tebboune demanded the "immediate and rigorous application of the law" to end such activities, saying, "The state will be intransigent."

Authorities are seeking to arrest Rachad members to unravel what they claim is a plot to destabilize the nation.

One of the group's founders, Mohamed Larbi Zitout, a former diplomat living in London, is among four people â€” all allegedly linked to Rachad â€” targeted in international arrest warrants issued in March by Algeria for alleged breaches of public order and the nation's security, APS reported. A fifth person, Ahmed Mansouri, a former FIS member arrested for joining a terrorist group in the 1990s then freed, was re-arrested in February for his alleged central role in the plot, included financing "secret activities" of Rachad.

"It seems the importance given to the Rachad movement is aimed at creating discord within Hirak and raising fears about it abroad," said political scientist Mohamed Hennad in the daily El Watan.

Many are now wondering whether they should join in the Friday marches.

"Doubt has (entered) and the demons of the 1990s are reawakening," journalist and Hirak activist Ihsane El Kadi wrote March 23 in a blog on independent online Radio M. But he argued that Rachad supporters should not be ostracized.

A group of university professors and high-profile supporters of the pro-democracy movement marched together last Friday, at Hirak's 112th protest, in front of a banner calling for unity.