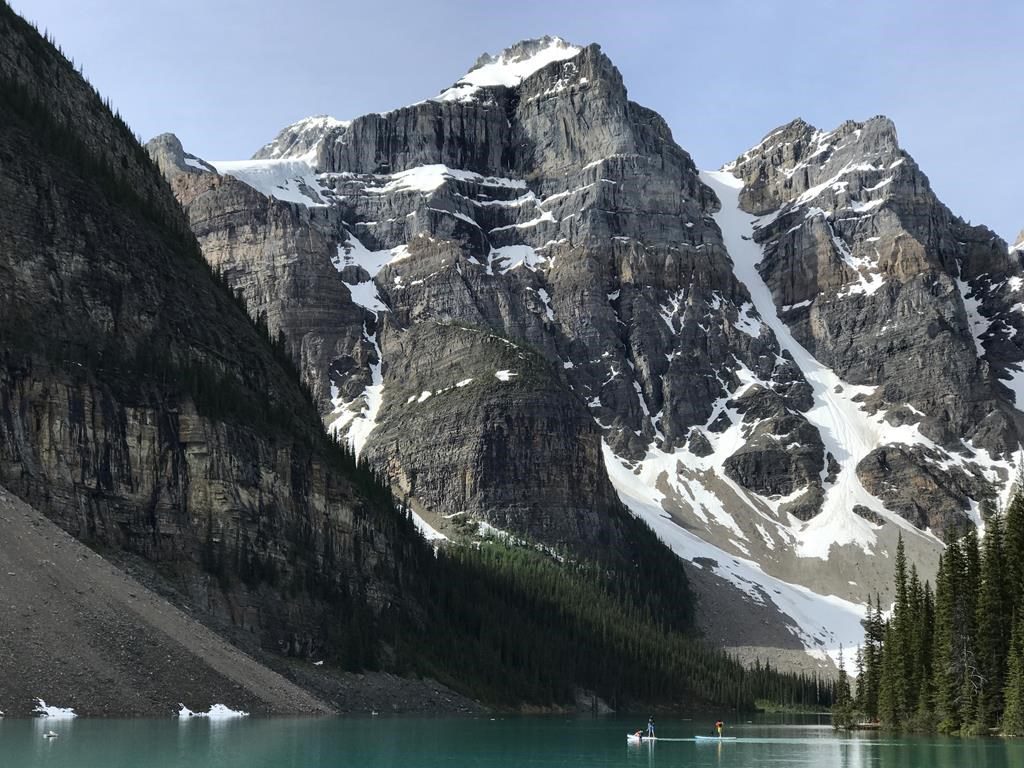 Some Albertans who regularly bike, climb, hike or take photographs at Moraine Lake in Banff National Park say a decision by Parks Canada to restrict personal vehicles on its access road was long overdue.

The federal agency has announced it will require visitors to take its shuttles, regional transit or commercial vehicles to get to the iconic blue alpine lake and its nearby climbing routes and hiking trails. People with a disability tag hanging in their vehicle and those who want to bike will be allowed to use the road.

Environmental groups say it’s a good start to protect the ecological integrity of the park. Others, including Alberta Premier Danielle Smith, have raised concerns it could reduce access for visitors, particularly those with canoes or large dogs, to the popular area near the hamlet of Lake Louise, Alta.

Parks Canada says it considered every user group and came up with a decision that could improve the overall visitor experience to Moraine Lake as thousands of vehicles were being turned away daily due to overcrowding.

The Alpine Club of Canada, a member-based association for outdoor enthusiasts, supports the decision.

“Something had to be done,” said the association’s Keith Haberl. “It was pretty untenable.”

This week, the club sent a notice about Moraine Lake to its members, which include climbers and hikers.

It highlighted visitor growth to the area where there’s a luxury lodge and canoe rentals, as well as the trailhead for hikes. The area, it noted, is even busy in fall when larch trees turn a brilliant gold and make the hikes a destination for photographers. Moraine Lake is also a starting point for rock climbing and to one of the alpine club’s backcountry huts.

Haberl said the association has received some complaints from members.

“The majority are either selfish in saying ‘this doesn’t suit me perfectly’ … or they don’t understand the situation,” he said, noting some were misinformed about the restrictions.

The shuttle’s hours could make it tougher for early risers, but he said he expects commercial operators to fill any gaps.

John Marriott, a professional photographer from Canmore, Alta., said he used to visit Moraine Lake to take sunrise photos until about six years ago.

“I arrived in the semi-dark and there were already 50 cars in the parking lot,” he recalled. “I actually turned around and left.”

Marriott compared it to traffic jams caused by people stopping along the road to see bears.

“Moraine Lake is … the worst of the worst,” he said. “Lake Louise is just a smidgen behind. And Bow Lake has got up there and Johnston Canyon. There are just parking lots overflowing everywhere.”

Marriott said he believes it’s social-media influenced after watching people go to a viewpoint just to take a selfie.

“I don’t think there’s a way to reach out and educate people before they get here, or when they get here, and that’s why I think Parks Canada has to step in,” he said. “They have to put conservation and preservation ahead of tourism in specific instances where tourism is starting to do damage and it’s starting not to be a good experience.”

The move was a recommendation from a Parks Canada expert advisory panel made up of transportation, recreation and tourism experts looking at how to move people sustainably in Banff National Park.

Its report, which received 15 submissions from affected groups, is taking public input until early February.

“Banff National Park is Canada’s most popular national park and one of the country’s most important tourism destinations,” says the report. “Over four million people visit the park annually and visitation increases every year.”

No one from Lake Louise & Banff Tourism could be reached for comment, but its president and CEO sat on the expert panel and other tourism associations and businesses sent in submissions.

Bill Keeling, who runs Wilson’s Mountain Sports in Lake Louise, said the area has been “under siege” for 15 summers.

Keeling said he had a great experience in Utah’s Zion National Park six years ago.

“You go on the bus or you go on your bike — and that’s awesome,” he said, noting the bus service is free with a park pass.

Keeling said Parks Canada should increase the frequency of its shuttles to allow more than the200 spots it will add this year. Last year, 2,500 people took the shuttles and 900 personal vehicles were allowed to park at Moraine Lake each day.

But Keeling said the move will benefit his business because it rents e-bikes — although he expects other bike rental options and some taxi companies to start up.

“This should be an improvement because, as long as you get to Moraine Lake, it won’t be a traffic jam.”