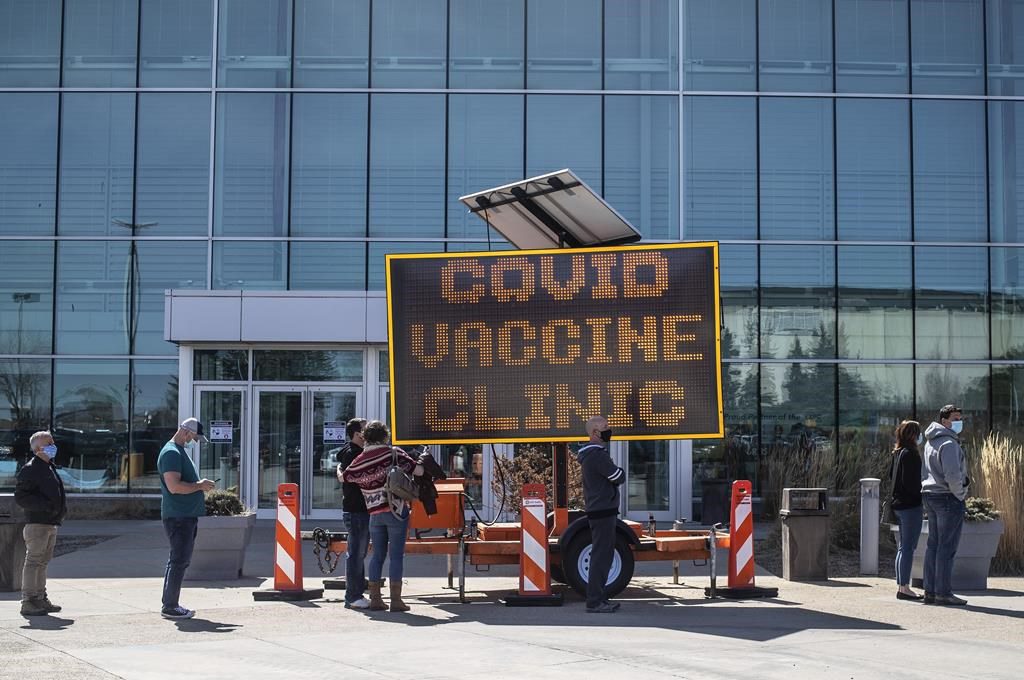 EDMONTON â€” Albertans were voting with their feet and arms Tuesday as they lined up and signed up to get the Oxford-AstraZeneca COVID-19 vaccine.

The response came as cases and hospitalizations continued to rise, powered by more contagious variants. Thousands more students in Edmonton joined those in Calgary and Fort McMurray in moving to online learning at home.

Premier Jason Kenney said the decision to lower the age eligibility for the vaccine to 40 resulted in 27,000-plus bookings and big lineups on the first day.

"That is more uptake in one day than in all of last week, so well done to everybody who is participating," Kenney told a news conference.

"With COVID-19 cases at high levels throughout the province, we want as many folks as possible to be able to choose the protection that this vaccine offers."

Kenney said he, too, is now eligible and booked his AstraZeneca shot for Thursday.

The age change makes another 575,000 people eligible, but Kenney cautioned that only 160,000 AstraZeneca doses remain. Future shipments are in question given that the government in India, which supplies the vaccine to Canada, has temporarily banned exports.

In Edmonton, up to 100 people stood in line at lunchtime outside the Expo Centre mass vaccination clinic. Thirty cars were waiting to enter the grounds.

Jody Dewaal, 52, found out Monday that she was finally eligible to get vaccinated and decided to head to the Expo Centre the next day.

"It's about time," Dewaal said.

"We've been waiting. I have senior parents and I have a child who has asthma, so we just like to have some kind of protection."

Alberta has joined Ontario, Manitoba and British Columbia in offering the AstraZeneca vaccine to anyone 40 and older. Saskatchewan announced Tuesday it was doing the same. Quebec said it was lowering the age to 45.

The shot had been limited to those over 55, but Alberta said it lowered the age based on new health data and because thousands of doses were being left unused.

Vaccine hesitancy has been an issue among the older age group following reports globally of rare blood clots developing in some who received the AstraZeneca product. One Albertan has been affected, has been treated and is recovering at home.

Hinshaw and Shandro posted pictures of themselves on social media Tuesday getting the vaccine.

"The risks of adverse reactions (of AstraZeneca) are minuscule compared to the risks of COVID-19," said Kenney. "Anyone infected with COVID-19 is much more likely to experience a blood clot from COVID than they are from the AstraZeneca vaccine."

AstraZeneca is one of multiple vaccines available but the only one open to the 40-plus cohort. So far, more than 1.1 million Albertans have received at least one dose.

Kenney has said the situation has become a race between the spread of COVID-19 variants and getting a critical mass of Albertans vaccinated.

Alberta has more than 18,000 active cases. There have been well over a thousand new cases every day for the last two weeks.

Hinshaw said there were 1,345 new cases along with 476 people in hospital with COVID-19 on Tuesday. Of those, 105 were in intensive care. There were five more deaths for a total of 2,048.

She said the variants, which are far more contagious than the original strain and can result in worse health outcomes, made up 57 per cent of active cases.

The surge has left school boards scrambling to deal with quarantines and staff shortages. The Calgary and Fort McMurray school boards already moved all Grades 7 to 12 learning to at-home. On Tuesday, the Edmonton Catholic and public boards followed. They said those grades would learn remotely as of Thursday for at least two weeks.

"This is a difficult decision to make, but the safety and wellness of students, staff and families is our top priority," said a news release from Edmonton Public Schools.

In the legislature, Opposition NDP Leader Rachel Notley urged Kenney and his United Conservative government to work with her to fast-track legislation to allow people to get three hours off with pay, if necessary, to get vaccinated.

Kenney was receptive and said he would get back to Notley on Wednesday after consulting with officials.

This report by The Canadian Press was first published April 20, 2021

â€” With files from Fakiha Baig in Edmonton