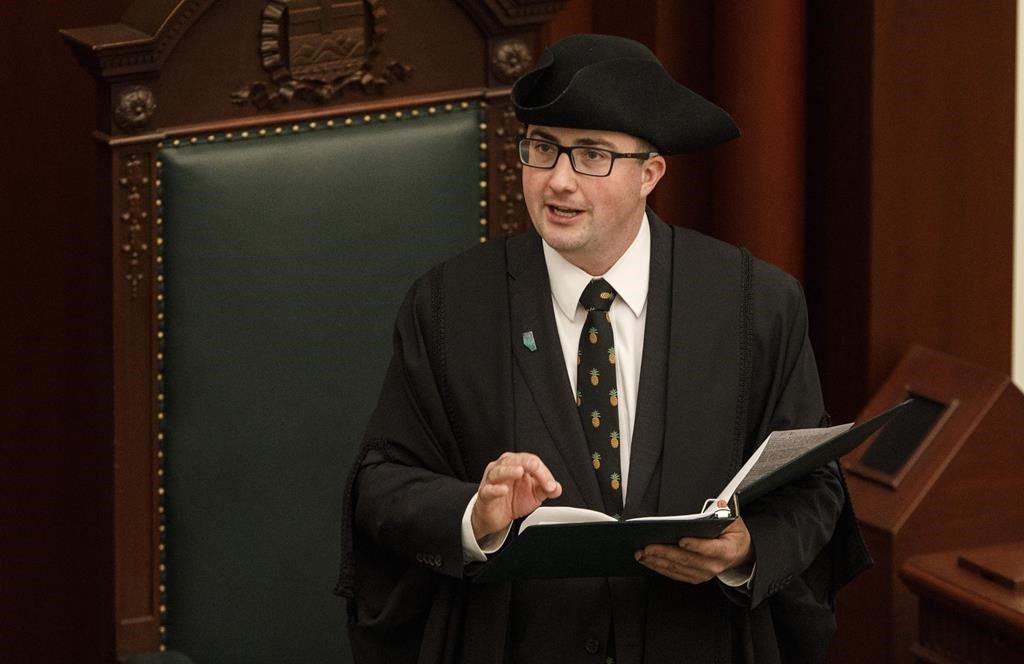 EDMONTON â€” The Speaker of the Alberta legislature is apologizing for publicly condemning the government's new COVID-19 health restrictions.

Nathan Cooper, in a speech read aloud in the debate chamber on Monday, said it's paramount that the Speaker remain neutral.

"The principle of the impartiality of the chair is fundamental to a healthy, functioning democracy," said Cooper.

"I deeply regret my actions, that they may have jeopardized the importance and supremacy of this principle.

"I apologize to each and every one of you for crossing a line that the Speaker ought not cross.”

Speakers are picked from one of the legislature parties and are expected to be impartial given they control debate in the house.

In an open letter, 16 of them, including Cooper, said the restrictions are a backward step and promised to continue to fight for the livelihoods and freedoms of Albertans.

Another member, UCP backbencher Martin Long, also publicly opposed the rules, while UCP member Dan Williams criticized the restriction that keeps attendance at worship services to 15 per cent of capacity.

Together, the 18 make up almost half of the backbench of Kenney's UCP caucus.

The open letter was released Wednesday and, a day later, Cooper found himself caught in the crossfire of debate when Opposition NDP member Thomas Dang told the house in question period that the UCP letter writers were telling people to not obey health restrictions.

"Mr. Speaker," said Kenney. "That is manifestly untrue. You yourself should know that, because you signed the letter. Would you please correct the member?"

On Monday, just hours before Cooper's speech, Kenney was asked at a news conference if he believed Cooper could still do the job â€” or be perceived to do the job â€” objectively.

Kenney declined to answer but said, "The long-standing tradition that goes back hundreds of years is for the Speaker to avoid taking positions on current and contentious political issues because the Speaker does have a responsibility to represent the whole house and not a faction.

"In my 24 years as a parliamentarian, I cannot ever recall the Speaker having violated that â€” until last week."

Opposition NDP Leader Rachel Notley has also said she found Cooper's situation troubling but that it should not detract from the larger issue of so many other backbench UCP members fighting government rules designed to keep Albertans safe and healthy.

She told the house that Kenney is tolerating the open dissent to keep his caucus from fracturing.

"His main concern isn't public health. It's his own political survival," said Notley.

"Premier, say it ain't so. Stand up to these MLAs today, make them apologize for the confusion and risk they are creating."

The more contagious COVID-19 variants are now the dominant strain in Alberta, and daily case counts are over 1,000, echoing a wave of cases that threatened to swamp the health-care system before Christmas.