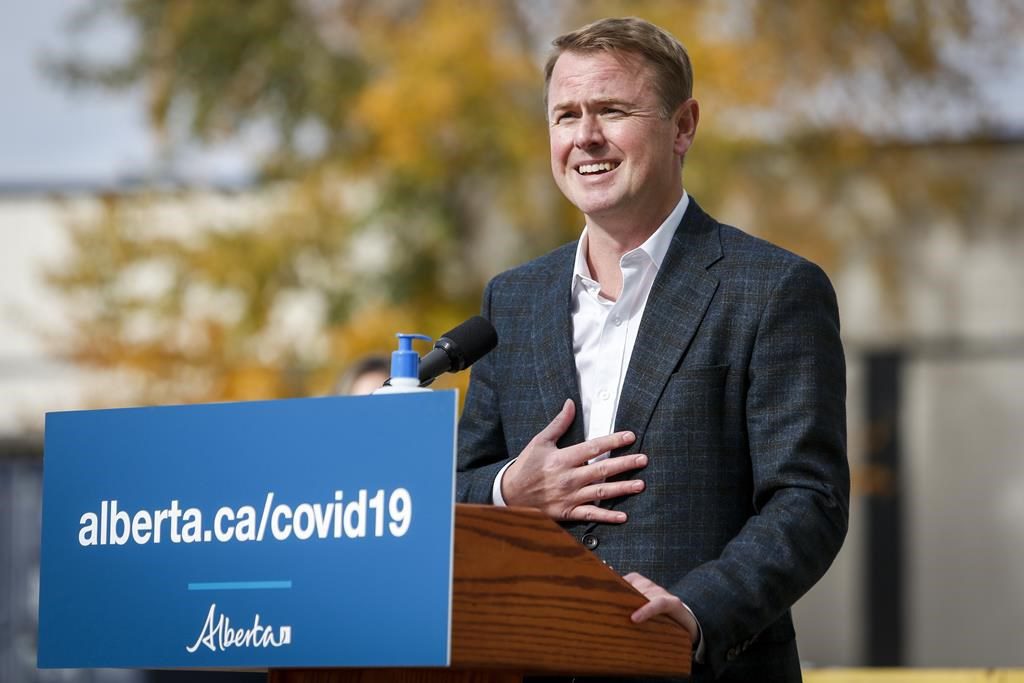 "We don't have any of those recommendations right now from Dr. Hinshaw, but we will continue to make sure she has the resources available to her to be able to make the right recommendations."

Deena Hinshaw, chief medical officer of health, has said decisions about tightening public-health measures are made by elected officials.

"Conversations are ongoing, looking at all those factors that need to be weighed," she said.

Alberta's case numbers, driven by more contagious strains of the COVID-19 virus, are rising to levels not seen since the height of the second wave before Christmas.

At that time, Premier Jason Kenney's United Conservative government had to bring in tighter rules on businesses and gatherings to keep hospitals from being overwhelmed.

Those rules were later relaxed, then tightened again on April 6 as another wave of the pandemic hit. Since then, at the request of school boards, some divisions have sent tens of thousands of students home to learn online.

The province reported 19,446 active cases Friday following weeks of daily case counts of more than 1,000. A total of 549 people were in hospital with the illness, 125 of them in intensive care. There were five more deaths, for a total of 2,059.

From the start, Kenney has used as few lockdown measures as possible with the aim of saving both "lives and livelihoods."

The result has been measures that have expanded and contracted as three waves of the virus have rolled through in the past year.

Kenney has been squeezed from both sides by people who want more restrictions and those who want fewer, including United Conservative members of the legislature.

The April 6 restrictions prompted almost half of Kenney's backbench to issue a public letter criticizing the decision as a backward step and a further diminution of liberties. The 16 signatories were later joined by another dissenter.

Kenney has refused to publicly sanction any of them for challenging government policy. That has forced him into pretzel twists of logic during legislature debate in which he champions his caucus dissenters’ right to free speech, while calling the Opposition’s criticism of the pandemic response destructive partisanship.

In recent weeks, Kenney has framed the COVID-19 fight as a race between "the vaccines and the variants."

Opposition NDP Leader Rachel Notley said it's clear case numbers are moving in the wrong direction and that Shandro can't simply hope the vaccines kick in.

"We cannot stand by while more and more Albertans are put at risk and while our health system is at risk of being overwhelmed," said Notley.

She suggested Kenney is so preoccupied with keeping his caucus from fracturing, thereby threatening his leadership, that he is allowing rebel factions to dictate his COVID-19 decisions.

More than 1.3 million Albertans have received at least one dose of vaccine. That number was given a big boost this week after the province expanded eligibility to people 40 and over for the Oxford-AstraZeneca product. That led to thousands more bookings and lineups at drop-in facilities. More than 48,000 doses were administered in three days.

Also Friday, Canada’s advisory committee on immunization recommended that AstraZeneca be offered to those as young as 30.

Shandro said there won't be a policy change, given that there are only 112,000 AstraZeneca doses remaining and the province doesn’t know when more will arrive.

"We will continue administering doses to those 40 and older at this time," he wrote on Twitter.