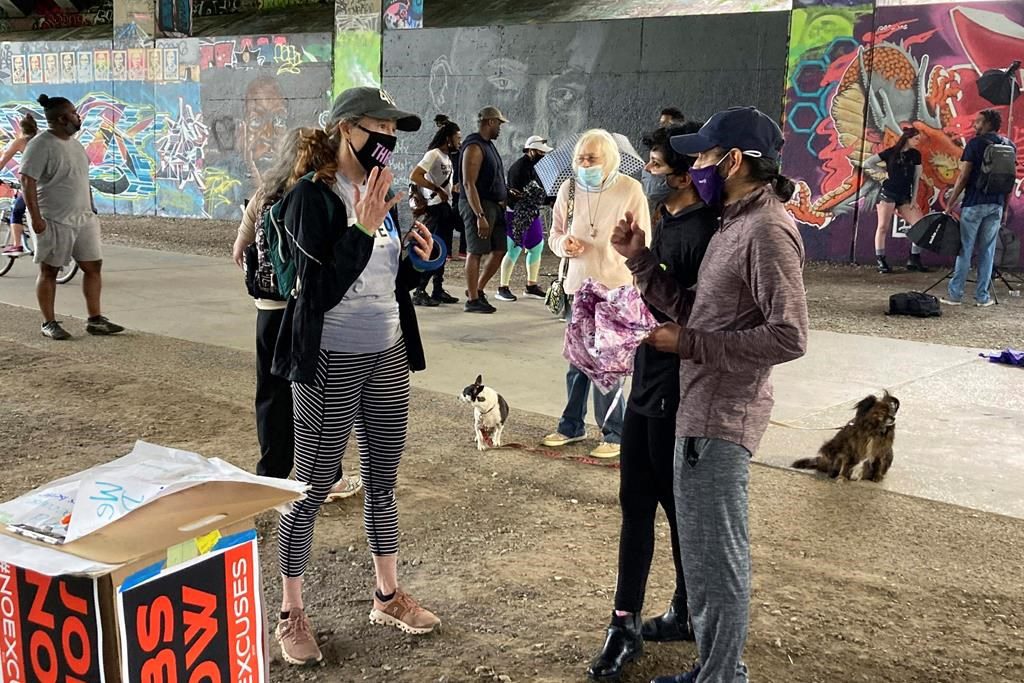 ATLANTA â€” Activist Jan Rivers stood surrounded by "JOBS NOW" signs as she tried to round up support for a massive infrastructure and climate proposal backed by progressives.

It was a straightforward assignment, yet Rivers' recent day on the Atlanta Beltline, a trail through the city's fastest-growing liberal neighbourhoods, ended up as a political free-for-all. The voters who stopped wanted to talk about hate crimes, labour law, institutional racism and the climate crisis, among other issues.

"It's a galaxy of things," Rivers said, noting her own top issues are immigration and criminal justice reform. She then clarified that, "Right now, I think the voting rights bills are the most important thing that needs to happen."

The exchanges reflect the next challenge for the progressive movement: settling on its top priorities. After successfully passing a pandemic response bill, President Joe Biden has made a $2.3 trillion infrastructure and public works proposal his next clear legislative goal. But Democrats’ left flank, which worked closely with Biden on the COVID-19 bill, is sorting through a list of issues it wants to tackle next.

The spotlight often shifts. After Georgia Republicans passed a new election law, many progressives declared a Democratic countermeasure the No. 1 goal. The Derek Chauvin murder trial has resurrected calls for criminal justice legislation. Some liberals want an immigration overhaul. Others seize on expanding the Supreme Court. This week, the Democratic-led House voted to make the District of Columbia a state. And progressives have their own version of climate and public works spending that would go beyond Biden’s.

All face long odds in a closely divided Congress where a 50-50 Senate could become a legislative graveyard for Democrats’ agenda. That puts growing pressure on the left as party leaders and activists look toward the 2022 midterm elections, when Democrats will have to pitch voters on what they've accomplished while controlling both ends of Pennsylvania Avenue.

"I'm proud of what we got done" on the COVID-19 bill, said Rep. Pramila Jayapal, D-Wash., chair of the Congressional Progressive Caucus. But, she added, "We can't go back to voters and say we couldn't pass" additional measures on environmental protections, voting rules and labour law because of Republican obstruction in the Senate.

Progressives’ preferred answer is to scrap the filibuster, which effectively requires 60 votes for major nonspending bills. But beyond that procedural solution is what Maurice Mitchell, leader of the Working Families Party, calls "sort of a laundry list" of ideas.

"There's a window that was opened with all the efforts to defeat (former President) Donald Trump," Mitchell said. "We understand that window won't stay open forever."

The so-called Thrive Agenda is perhaps the left's most organized push, backed by an umbrella of labour unions, environmental outfits and civil rights organizations calling itself "The Green New Deal Coalition." On policy, it's not fundamentally different from Biden's pending infrastructure and public works package, which would mark a major shift in climate policy through clean energy investments. But progressives want to spend closer to $1 trillion annually and adopt an even more aggressive timeline to reach a carbon-neutral economy that doesn't contribute new pollution that warms the Earth’s atmosphere.

Additionally, progressives endorse a suite of election law changes that has passed the House but has an uncertain Senate path: national standards for voter registration, early voting and mail voting; requiring a nonpartisan process for drawing legislative and congressional districts; expanding public financing of elections; and restoring provisions of the Voting Rights Act, gutted by the Supreme Court, that gave federal officials more power over how states conduct elections. They group it together as "democracy reform."

Labor activists want a range of worker friendly proposals: paid family leave, sweeping student loan forgiveness, a minimum-wage hike that was jettisoned from the COVID-19 relief package, an overhaul of labour law to make it easier to unionize. There are pushes from some quarters for a wealth tax, beyond the income and investment tax hikes Biden proposes.

It's enough to feed a daily diet of Republican attacks on Biden and congressional Democrats as being too extreme.

Jayapal argued that the 2020 election results and public support for the COVID-19 bill demonstrate a "country ready for bold, progressive, populist solutions."

Biden used the new political environment to his advantage, Jayapal said, by holding the line on a hefty COVID-19 bill rather than cutting the price tag to get Republican votes.

"The president built some goodwill," she said.

Mitchell and Adam Green, co-founder of the Progressive Change Campaign Committee, described a progressive movement that has blossomed since President Barack Obama's election in 2008 and Sen. Bernie Sanders' presidential bid in 2016. What began as an insurgency now mixes grassroots pressure from outside the room with having legitimate power players inside the room.

"Democrats and progressives are aligned on the need to go big," Green said. "If the argument is mostly over scale, then that tension and any debate over the order of priorities hardly qualifies as civil war."

There's also recognition that a 50-50 Senate with a filibuster isn't the same as having the kind of majorities that gave Biden's Democratic predecessors Franklin Roosevelt and Lyndon Johnson their signature legislative achievements â€” the New Deal, Social Security, Medicare, Medicaid.

That means Green's group maintains "open lines with lots of senators, including (Joe) Manchin," the moderate West Virginia Democrat who opposes any filibuster changes. At the same time, Mitchell's group, the Working Families Party, is encouraging Manchin's constituents to pressure the senator on the merits of proposals, especially the election laws and economic measures aimed at the poor and middle class, that wouldn’t pass with a 60-vote threshold. And both groups are pushing Democrats to use Senate rules on spending bills to pass as much as possible with their 50 votes, plus Vice-President Kamala Harris as tiebreaker.

Jayapal, meanwhile, said Biden has committed to a White House meeting soon with members of the progressive caucus.

That kind of inside-outside strategy, she said, is how Democrats can meet her "minimum" threshold for action ahead of lawmakers’ August recess: passing an infrastructure bill with climate provisions, major election law changes and a family aid package.

It's also the sort of approach that keeps activists like Jan Rivers involved.

"We watched the tea party just say no to everything and win," she said of the conservative movement that formed in the Obama era. "I keep telling my friends that we can't just go back to our lives because the election is over."