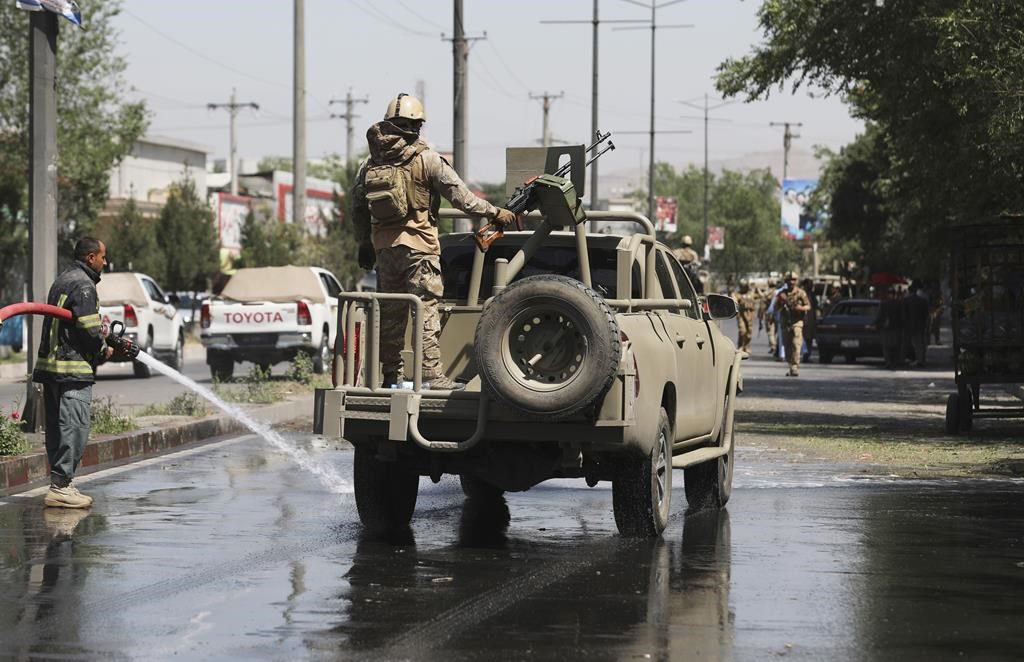 The minivan fell into a valley with the shock of the explosion Saturday, said Badghis provincial Gov. Hesamuddin Shams, adding that rescuers were still searching for bodies in the valley.

No one immediately claimed responsibility for the attack but the provincial government accuses the Taliban of placing the bomb to target security forces. There was no immediate response from the Taliban.

Large swathes of war-ravaged Afghanistan are littered with bombs and land mines. Many were planted by insurgents to target government military convoys, but they often kill civilians instead.

The United Nations has repeatedly demanded both government forces and the Taliban take more precautions to protect civilians. In the first three months of this year, the U.N. mission in Afghanistan said that 1,783 civilians had been killed or wounded in Afghanistan, an increase of 29% over the same period last year.

The violence comes as U.S. peace envoy to Afghanistan Zalmay Khalilzad and a delegation from the National Security Council and Department of Defense traveled to the region to start a new series of talks between the Taliban and the government. They were to meet in Kabul and Doha in Qatar to urge the sides to reach a political settlement.

Negotiations between the Taliban and Afghan representatives began last September in Doha and continued earlier this year. But the Taliban announced on April 13 that it would not take part in any conference intended to decide the future of Afghanistan until all foreign troops were gone.

President Joe Biden had announced a day earlier that all U.S. troops would leave Afghanistan by Sept. 11.

In northern Faryab province, provincial officials said Sunday the district of Qaisar had fallen to Taliban fighters after a weeks-long fight between the two sides.

Provincial council chief Mohammad Tahir Rahmani told The Associated Press that provincial police chief Saifulrahman was killed in the fighting along with seven other police officers. Like many Afghans, Saifulrahman went by one name.

According to Rahmani, the district had already fallen but police officers at police headquarters were resisting. He said the Taliban took 37 police hostage.

A provincial police officer who spoke on condition of anonymity because he was not authorized to speak to media, said that besides police headquarters, the main market and municipality office fell to the Taliban.

The Taliban immediately did not comment on taking control of Qaisar district but both the Taliban and Afghan government defense and security forces have increased their operations against each other.