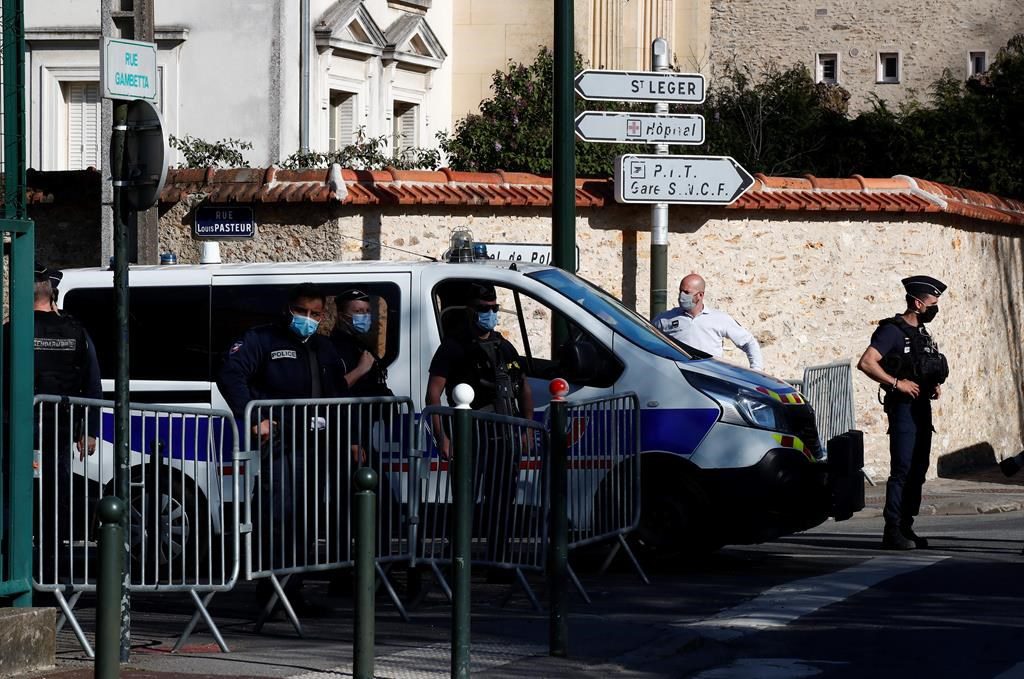 RAMBOUILLET, France â€” French authorities detained a fourth person Saturday as anti-terrorism investigators questioned three others, seeking to establish a motive and uncover any possible ties to extremism after a police official was fatally stabbed at a police station outside Paris.

French police killed the Tunisian suspect in the Friday slaying of an unarmed administrative employee at the entrance of her police station in the town of Rambouillet. The suspect’s father is among the four currently held, a judicial official said. A couple who had housed the suspect at one point and a member of his entourage, who was detained Saturday, also were being questioned.

The victim, a National Police employee, had left the station to extend her time on a parking meter and was followed into the entry area by the attacker, who was shot to death by a police officer.

"(Police) know we have a difficult fight against Islamist terrorism … the fight won't stop tomorrow or the next day," Darmanin said after meeting with police in the Brittany town of Quimper, which he was visiting.

French President Emmanuel Macron, meanwhile, visited the family of the victim, a 49-year-old identified only as Stephanie. She lived in Thoiry, about 30 kilometres (19 miles) north of Rambouillet. The president’s office said he wanted "to show support and solidarity with the family … very upset and very dignified."

A steady stream of people bearing flowers handed the bouquets to police officers in Rambouillet who were guarding the blocked-off street where the station sits.

The attacker entered France illegally in 2009 and was given residency papers in 2020, a judicial official said.

The 37-year-old suspect, identified by French officials as Djamel G., had no criminal record or record of radicalization, French media reported. But witnesses heard him say "Allahu akbar!" Arabic for "God is great," during the attack, said the judicial official who was not authorized to discuss the investigation publicly.

Infrequent Facebook and Instagram posts from accounts thought to have belonged to the suspected attacker, who spells his name Jamel, hinted at a man who waffled over the years about his allegiances but had with no overt ties to an extremist ideology. The U.S.-based SITE Intelligence Group uncovered the accounts, in which he described himself as a Tunisian from Msaken, near the eastern coastal town of Sousse.

The judicial official confirmed to The Associated Press that the name associated with the accounts "appears" correct, but in keeping with French practice, the official would not confirm the attacker’s full name.

Jamel G.'s last post on April 18 is a prayer for a blessed Ramadan, the Muslim holy month now in progress.

Nunez, the intelligence co-ordinator, said apparently isolated people off authorities’ radar who suddenly go on the attack means that more work on psychological profiles is needed.

"It’s becoming very, very complicated to … detect this type of profile" with no apparent links to known extremists, Nunez said.

The French government has been emphasizing security, mindful of the presidential election next year. Macron has vowed to put more officers in the streets and the interior minister says 10,000 will be added by next year. Darmanin has made a point of defending police amid claims of brutality amid the Black Lives Matter movement and the growing popularity of far-right leader Marine Le Pen.

In other previous attacks, three French police officers and an administrative employee were killed by a colleague in 2019 inside Paris police headquarters. A police couple was also murdered in 2016 in their home in the same region as Rambouillet.