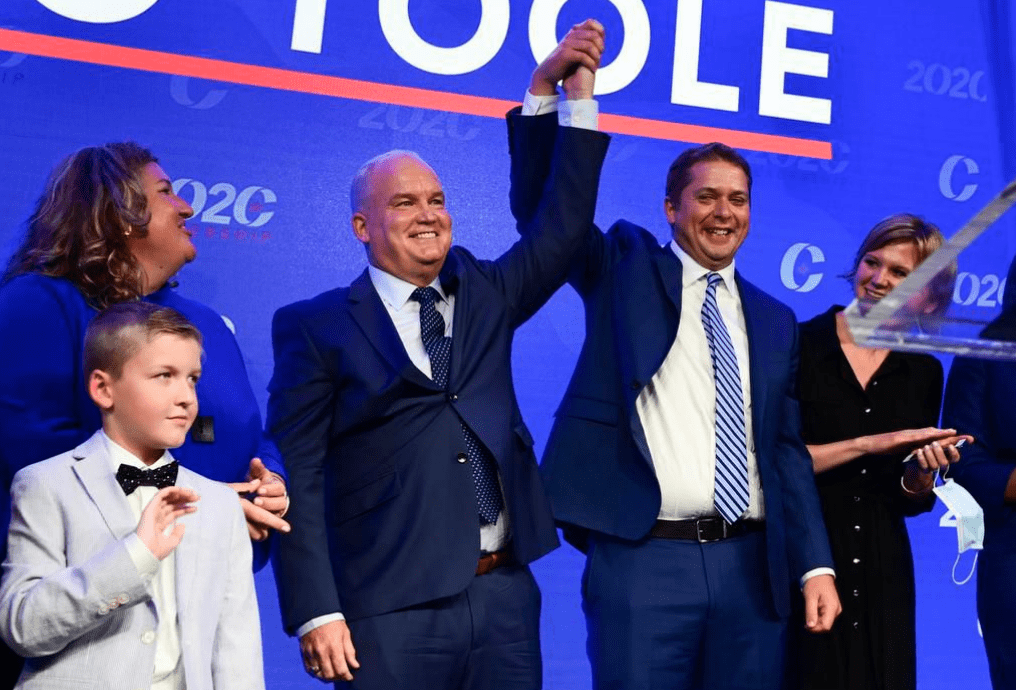 In a week of parliamentary brinksmanship, it pays to read a little further beyond the words on the page or the credulity of certain media personalities, and delve a little deeper, because some of the details of what took place appears to have been missed by everyone playing the "will they or won't they?" game.  While everyone has turned their attentions to both prime minister Justin Trudeau for his bravado in playing the confidence gambit, and to Jagmeet Singh as to whether or not he would prop up the government (as though it were a serious question), not enough attention has been paid to what Erin O'Toole has been up to in precipitating the events of the past week.

The first week that O'Toole was on the job as leader, there were plaudits left and right about how articulate he was, and how he was striking such a different tone from his predecessor, Andrew Scheer, who alternated between being a smirking doofus and a braying doofus.  Of course, as soon as O'Toole was installed, he swiftly pissed away the party's few remaining economic credentials by embracing protectionism and old-school NDP talking points, and started talking like a cartoon pundit by decrying "cancel culture" over social media.  The shenanigans of the past week have shown that O'Toole is little changed from Scheer in substantive ways that he feels the need to continually lie in Parliament, and that the Order Paper is a game to score points with by a cadre of shitposters in his office.

The whole notion of an "anti-corruption committee" is a prime example of this kind of game-playing.  The decision to label it an "anti-corruption" committee was the first clue that this was solely about scoring points on social media, and when the Liberals made it clear that this was a complete non-starter, O'Toole graciously offered to change the title to the "special committee on allegations of misuse of public funds by the government during the COVID-19 pandemic," whose first four words would abbreviate to SCAM when it appears on the committee webpage.  Nothing about this was serious or about actual accountability.

Of course, O'Toole and the party tried very hard to present this committee as a legitimate attempt to break the logjams around production of documents, but it was anything but.  If any of the credulous journalists who described the motion as "pedestrian" had actually read it, they would have seen that its terms of reference would have given this committee priority over parliamentary resources, and forced the production of documents and witness testimony from ministers including the prime minister, so that the committee would be forcing witnesses and civil servants to drop everything and produce materials or appear at whim.  It proposed a structure that was unbalanced in favour of the opposition by as many as three additional MPs, meaning the government would be unable to offer any kind of legitimate procedural pushback, and this would have led to an unending series of fishing expeditions and wild goose chases that were given super-priority while the government is trying to deal with a global pandemic when they are already at reduced capacity.  It also crossed a line in trying to drag the prime minister's mother and brother into the fray, which should be a warning to every politician that the standards of decorum that we hold ourselves to in Canada are starting to fray.

O'Toole kept maintaining that the prime minister calling him out over it as a confidence measure must mean he was hiding something, and cited the Baylis Medical story as "proof."  The problem is that story is unadulterated fiction a brake pad manufacturer decided he wanted to do his part and build ventilators, and Baylis Medical had a cleanroom facility that was available for them to use, so they signed a partnership, not knowing that Frank Baylis was recently an MP (who opted not to run again after a single term).  Nevertheless, the narrative O'Toole spins is one of cozy deals with friends of the party.  After all, innuendo is all he needs when he knows that most journalists will just repeat the accusation in an attempt to both-sides the story rather than simply pointing out the lie.

The other lie that O'Toole has been spinning this week has been that the government is appointing Liberal partisans to the courts, a fiction based loosely on a poorly written CBC story about the PMO vetting potential candidates through partisan databases without mentioning that this should be expected because the prime minister is politically accountable for these appointments.  But because this and the Baylis story feed into the notion that the WE Imbroglio was about rewarding Liberal "friends" (never mind there was no proof that the Kielburgers were actually friends of the Trudeaus, and it was more likely that the bureaucrats in the department believed the Kielburger spin about WE's reach), it's accepted as a legitimate narrative.

This reliance on lying in order to make people angry is one of those lessons that the Conservatives failed to learn after the last election, and seem bound and determined to keep ignoring in the lead-up to whenever the next federal election will be.  And it's not like there aren't enough genuine problems out there to nail this government with.  The only material changes between Scheer and O'Toole these days are that O'Toole's shitposts have better photoshop, and that O'Toole is more apt to use the language of toxic masculinity to bolster his bravado and bluster in the face of being called out like he was over his committee motion.  If anyone was hoping for a more mature leader, someone who was looking to legitimately build bridges and expand the party's base, I'm not sure that there is any evidence that this is actually happening.  Instead, O'Toole is doubling down on the same failed strategy of constant rage.  This isn't how to win the country, and it brings to mind Wells' Fourth Rule: The guy who auditions for the role of opposition leader will get the job.