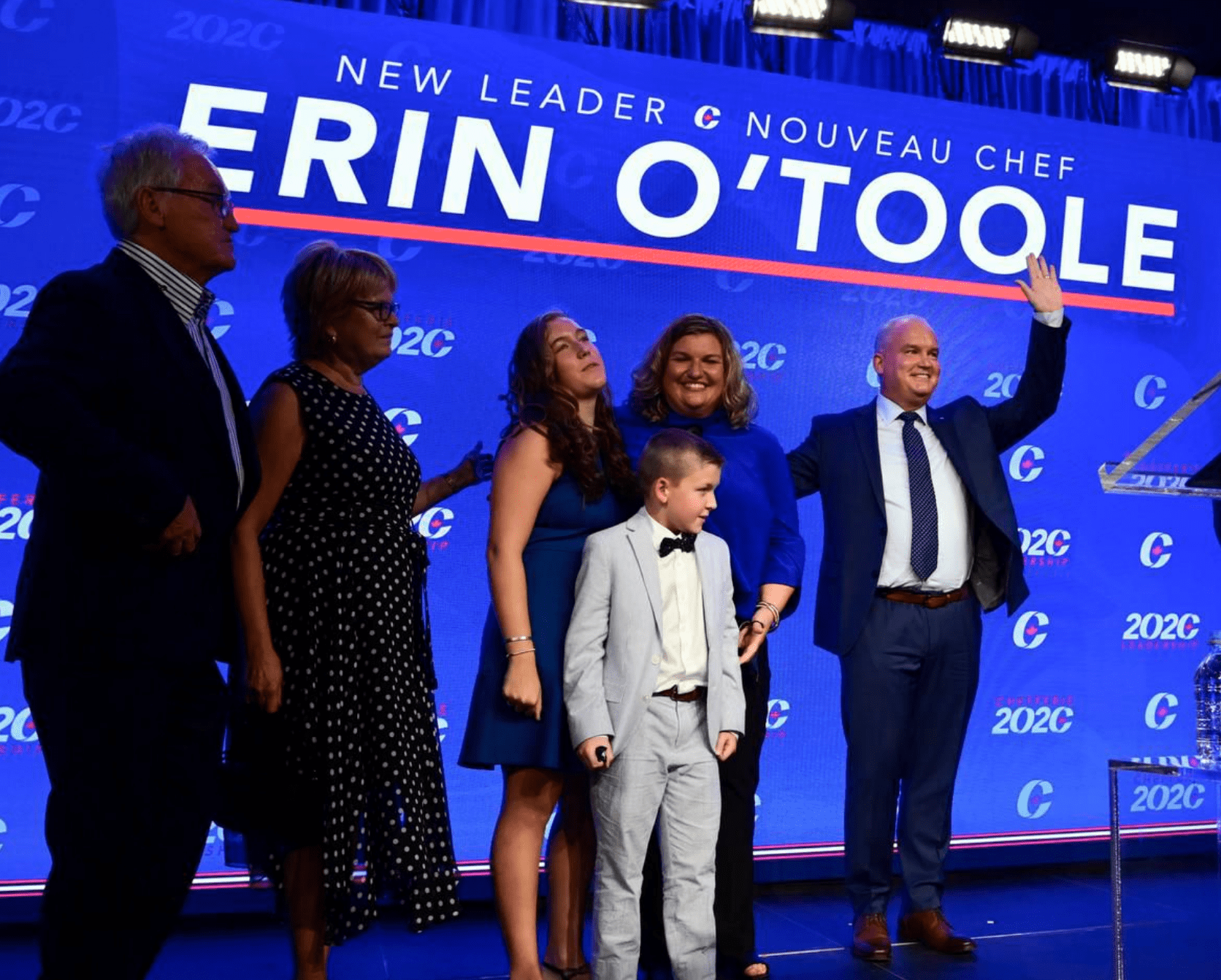 On Labour Day, new Conservative leader Erin O'Toole released a video that outlined some of his particular economic vision that sounds suspiciously like it is unwinding decades of economic consensus in this country, and that it is mirroring much of the rhetoric that is bubbling up from below our southern border.  Touting a Canada First economic strategy seems to be a final nail in the coffin of the party abandoning any kind of principled conservatism in favour of pure right-flavoured populism that abandons some of the traditional territory of conservatism while is attempting to encroach on territory that would traditionally be held by the political left in this country in a kind of funhouse mirror way.

In the video, O'Toole blames the layoffs of thousands of auto workers and the loss of tens of thousands of jobs in the energy and forestry sectors on both "big government" as well as "big business."  O'Toole posits that the federal government signed a "bad trade deal" with the United States while also trying to sign one with China (since abandoned, it should be noted), and accused them of trying to "phase out" the energy sector.  Both of these suppositions are hilarious because the New NAFTA is essentially salvaging what was possible given the unstable chaos engine that currently governs the US there is no rational actor that could have ensured a better trade deal, and pretending otherwise is both revisionist history and utterly disingenuous.  The counter-factual was no trade deal at all, which was Donald Trump's initial plan.  As well, the "phasing out" of the energy sector has precious little to do with the actions of the federal government and is almost entirely because of the world oil prices, which started to fall with the shale revolution in the US, and was exacerbated by the price war between Russia and Saudi Arabia.  Alberta's oilsands have largely been priced out of the market, which is not the fault of the federal Liberals, and O'Toole intimating otherwise is simply dishonest.

When it comes to O'Toole blaming "big business," where "corporate financial brokers" care more about shareholders than employees, he stated that they loved trade deals with China because of cheap labour, and he promised higher wages as part of his Canada First strategy that "doesn't cater to elites or special interests."  I find this highly curious because this seems to have abandoned the supposed respect for free market principles that the party espouses.  Of course, they haven't much demonstrated that respect, with their full-throated embrace of Supply Management and all manner of subsidies and assistance for the oil and gas industry.  It's also pretty much the wholesale adoption of several NDP talking points, which is practically unhinged, but no doubt part of O'Toole's strategy to reach out to blue-collar unions in the hopes of finding votes (but not public sector unions or teachers, because they're still evil, obviously).

O'Toole's mouthpieces are insisting that this Canada First position is principled, about not doing business with regimes who don't respect freedom, democracy or human rights (read: China), but if that really were the case, then there wouldn't be a need to make self-sufficiency arguments to justify it.  And if he wants to try and "get tough" on China, it's going to be especially interesting to see how exactly he plans to do that with no leverage.  After all, it's his voter base in Western Canada that is going to suffer if China closes their canola markets entirely, and if he thinks that China is still going to buy Canadian LNG (which is also a cornerstone of the Conservatives' environmental policy under the rubric that it will reduce global emissions), then he's delusional.  Likewise, if he thinks he can retaliate against Buy American tariffs or non-tariff trade barriers, he will have very little leverage to work with.

The Conservative rhetoric in recent weeks has been completely incoherent regardless O'Toole has been tweeting outrage about CanCon requirements, which is cultural protectionism with a lot of "good jobs" on the line.  His finance critic, Pierre Poilievre, has similarly been tweeting that there shouldn't be money going to corporate welfare (particularly when it comes to anything "green"), which goes against what's been happening in the oil and gas sector, and contradicts O'Toole's promise to protect auto workers.  Canada First is the kind of industrial strategy that Conservatives purport to hate, but it's just under patriotic wrapping.  It's the complete abandonment of the party's supposed economic principles.

The self-sufficiency arguments are also economically unsound.  When it comes to things like food risk, attempting self-sufficiency is actually a risker strategy than opening up trade markets because one bad harvest under "self-sufficiency" can mean that people will starve; open trade will mean that supply risks transform into price risks, which governments can more easily manage.  And while the discussions around what happened with PPE point to what was essentially a worst-case scenario as an argument for self-sufficiency, we were able to adjust quickly.

O'Toole's concern about manufacturing jobs (again, pretty much lifted from the NDP playbook) also ignores that the kinds of manufacturing jobs that were off-shored to places like China were generally the poorest-paid they were not "good jobs."  Losing these jobs and specializing in trade actually helped incomes to increase in this country.  It's the flip-side of the "Dutch Disease" arguments (where the concern is that natural resource jobs displaced manufacturing), because the new natural resource jobs in that scenario were higher-paying than the manufacturing jobs.  And yes, trade can be disruptive and can hurt some people, but since when has the answer been to stop progress?

The fact that O'Toole has, in one week, decided to bring protectionism back in a big way while contradicting himself at every turn in order to try and access NDP votes, is actually fitting in a 2020 weirdness kind of way.  O'Toole is trying to make his mark on the party, but pissing away a generation of work to open markets and throwing your party's economic credentials out the window is a hell of a way to go about it. 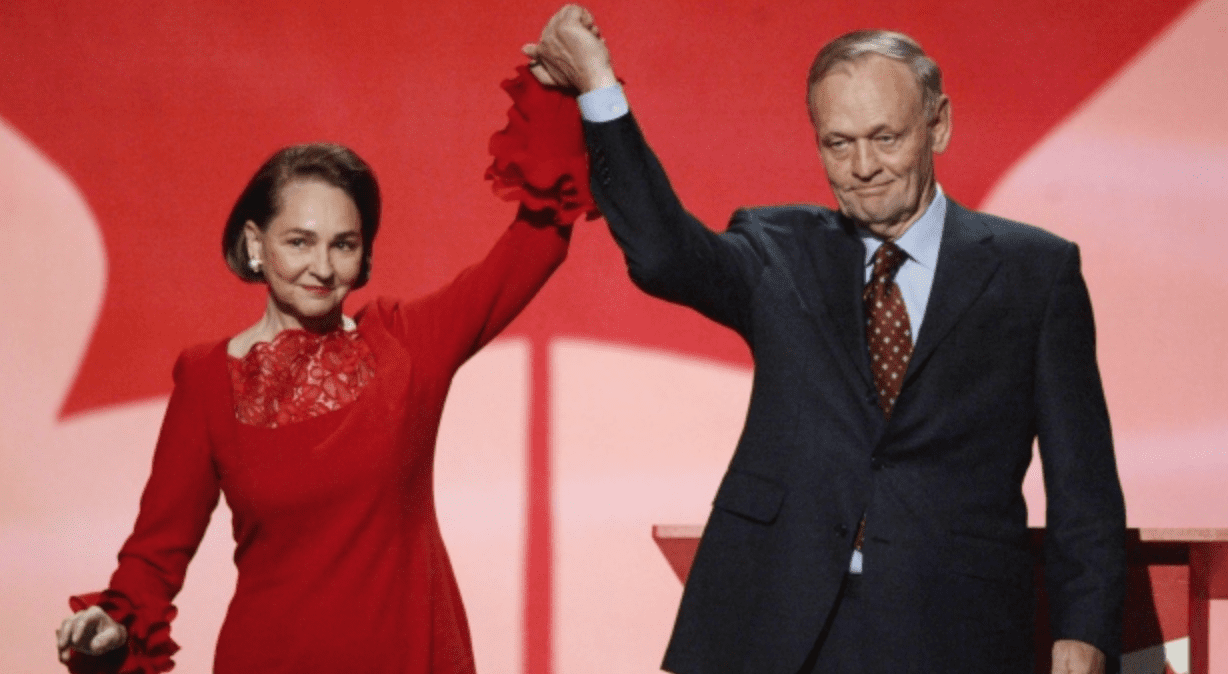 Imagine you are in an Ottawa hotel suite with the former Prime Minister of Canada and a former President of the United States.  The Secret Service are watching the door, and there's a photographer getting ready to take some shots.  Imagine that.

But then imagine that the door opens, and in walks Aline Chretien, looking as beautiful and as elegant as always.

And then imagine that the former President, Bill Clinton, rises to greet her, like one would an old friend.  And there is genuine affection and respect in his voice.

Imagine that the former Prime Minister, Jean Chretien, also rises to greet his wife.  And there is love and actual reverence shining on his face, and in what he says to her.  She smiles, and it is such a beautiful smile.

Imagine all that.  And then Bill Clinton insists that Aline Chretien stands at the centre, at the middle, because that's where she belongs.  And everyone smiles, and the photographer takes the picture.

In the office, we simply referred to her as "Madame."  She came from a small town, with humble roots, like him.  She did not ever require us to stand on ceremony for her.  She was quiet, much of the time, and left the politics to him.

But she loved people, and people loved her.  One night, he invited me to come to a party at 24 Sussex.  I wasn't sure why I was there: the place was full of their old friends from Shawinigan, all laughing and talking.  There were no politicians or celebrities.  They were cab drivers, and labourers, and teachers and waitresses and small business owners.

The Chretiens introduced me to their Shawinigan friends as "a fighters" for them, which was an honour.  And then Madame sat down at the piano an instrument she had taught herself to master, much later in life and started to play and sing.  And the place was alive with her voice and everyone singing along.

She fiercely defended her husband for years, going back to when they were teenagers.  When the Conservatives mocked his facial paralysis in an ad, she was furious, and told me that "Jean is handsome."  And everyone knows the story, by now, about how she dispatched an intruder at 24 one night, using an Indigenous sculpture to do what the RCMP could not.

But when a too-ambitious Finance Minister tried to drive her husband out, she became resolute.  They had a mandate, and they would not be pushed.  One night, at a wedding, she took me and a couple other former Chretien staffers aside.  She pointed at me.  "He tells the truth about Jean," she said to them.  "He fights for Jean.  We all have to fight for Jean."

And we did, we did.  But none as much as her.  She was his rock, his truest love, his everything.  And I confess that I am so worried for him, now.

Did you ever love someone so much, that they took your breath away, when they simply walked into a room?

Did you ever find yourself simply sitting at the edge of a group of people, watching your true love charm and delight those people, and saying nothing, because you are so proud and amazed that she chose you?

Did you ever love someone so much that you accepted, as a matter of course, that God sent her to you, so that you could breathe again, and so you could put one foot in front of the other, and go out into the day?

And we all loved her as we love him.