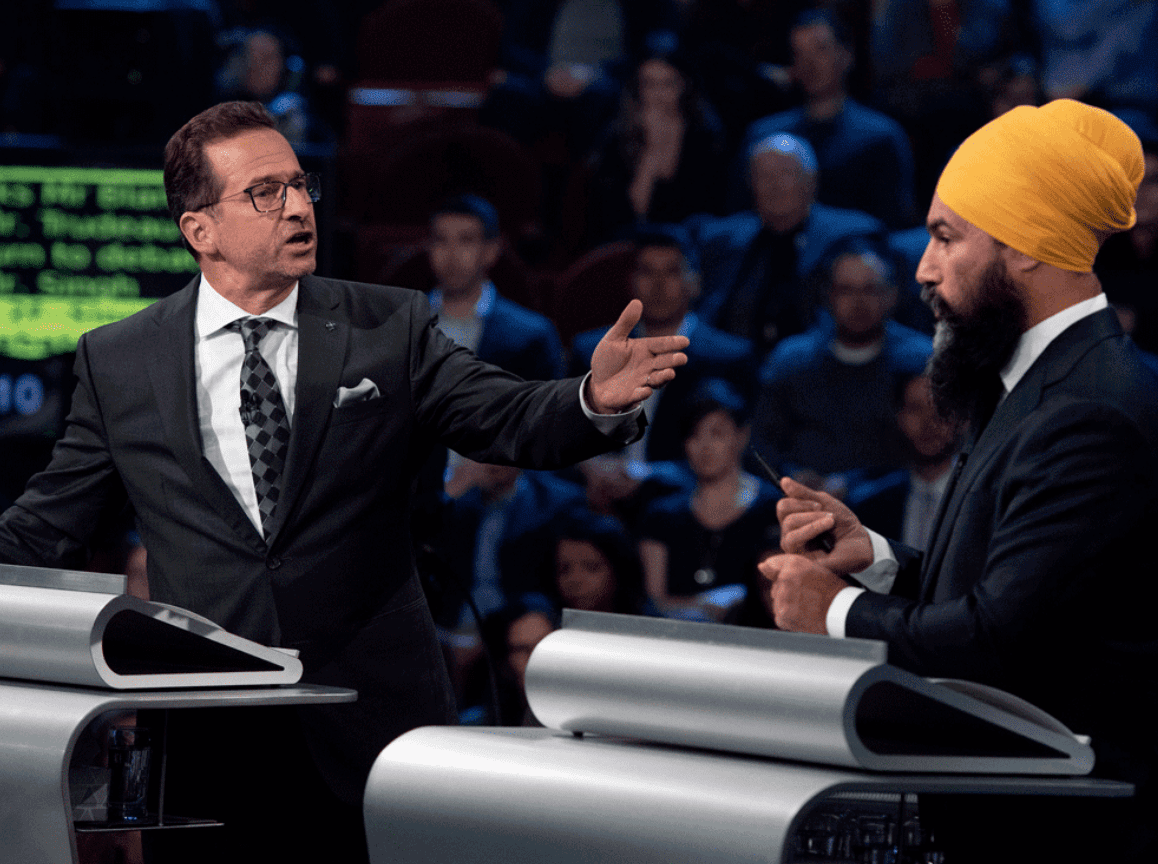 "â€¦[I]f the other parties work with us, we have an incredible opportunity to make the lives of all Canadians so much better."

"The Bloc QuÃ©bÃ©cois can collaborate with any government.  If what is proposed is good for Quebec, you can count on us."

Jagmeet Singh and the federal New Democratic Party knew a hung parliament was on the horizon.  A rare opportunity for the NDP to obtain power loomed.  Although the party wasn't on course to repeat its heady 2011 achievement of forming Official Opposition, something even more enticing awaited: a minority government, and the negotiating leverage that comes with it.

But unfortunately for New Democrats, the Bloc QuÃ©bÃ©cois largely disregarded since its 2011 electoral collapse ballooned in popularity just two weeks before election day, achieving its largest level of support in public opinion polls in six years.  And thanks to Canada's archaic voting system, the NDP ultimately received fewer seats than the Bloc, despite earning more than double the Bloc's national vote share.

This result elevates the Bloc to suitor of a Liberal minority government (assuming a coalition is highly unlikely), giving Justin Trudeau another potential collaborator for surviving confidence votes.  Because the Liberals have the choice of working with either the NDP or the Bloc, the NDP's negotiating power for acquiring policy concessions from the Liberals may be greatly diminished.  For example, if the New Democrats were to demand electoral reform as a requirement to support a Liberal budget, Trudeau could instead turn to the Bloc to get the votes he needs.

Liberal negotiators will undoubtedly exploit this as a strategic tactic during pending party negotiations.  This is likely to cause both the NDP and the Bloc to curtail their demands in the hope of being chosen as the Liberals' governing dance partner.  The Grits will also likely choose informal cooperation rather than a formal confidence and supply agreement as seen provincially in British Columbia, as the party will want to keep its options open and play the opposition parties off each other for as long as possible.

Trudeau will have little choice but to acquiesce, at least to a moderate degree, on policy areas that find broad agreement between New Democrats and the Bloc: more aggressive action on climate change and increased funding for social programs.  But on some opposition demands, such as proportional representation from the NDP or increasing xenophobia in Quebec from the Bloc, the Liberals hope diminished opposition leverage will give them the upper hand to reject both.

If there is no formal coalition or confidence agreement, the Liberals could rotate between NDP and Bloc support as needed.  The smart money is on the Liberals opting to cooperate with the NDP more often than not.  Although both New Democrats and the Bloc have expressed an interest in working with a minority government, the Liberals would find the NDP a far more palatable sidekick.  Working with the Bloc could make for uncomfortable optics; Conservatives would surely attempt to paint the Liberals as "submitting to sovereigntists," despite that the Bloc went out of its way to avoid evoking sovereignty this election.

A deal with the Bloc that secures increased social program spending primarily in Quebec, rather than for all of Canada, would be of limited use to voters outside la belle province, and could heap scorn on the Liberals unless money is more evenly sprinkled across the country.

Ironically enough, the Bloc's resurgence may be of benefit to voters outside Quebec at least for those who desire a stable hung parliament that works effectively and avoids an early election.  The more dance partners the Liberals have, the more likely the government is to acquire the confidence of the House of Commons and avoid an unexpected collapse.

Progressives outside Quebec may ultimately be disappointed by the resulting policies, as the opposition parties' decreased leverage will likely result in a more centrist government.  Even on matters the NDP and Bloc agree on, such as climate and social spending, the Liberals may be able to minimize concessions.

Even muted versions of NDP or Bloc policies, however, would require higher spending by a Liberal government already on the defensive about deficits.  Would the Grits opt to fund such spending by increasing deficits beyond projections in their platform, at the risk alienating centrist and Red Tory voters?  Or would the party instead be willing to generate additional revenue by increasing tax on the wealthiest members of society, as both the NDP and Bloc have advocated?  Neither would be a comfortable choice for the business-ensconced Liberals.

Strangely enough, the NDP will prove far more powerful in 2019 with only 24 seats than it was back in 2011 with a whopping 103 seats, due to a hung parliament.  Yet it must still sting for New Democrats that their expected opportunity to shine risks being eclipsed or entirely superseded by a renascent Bloc QuÃ©bÃ©cois. 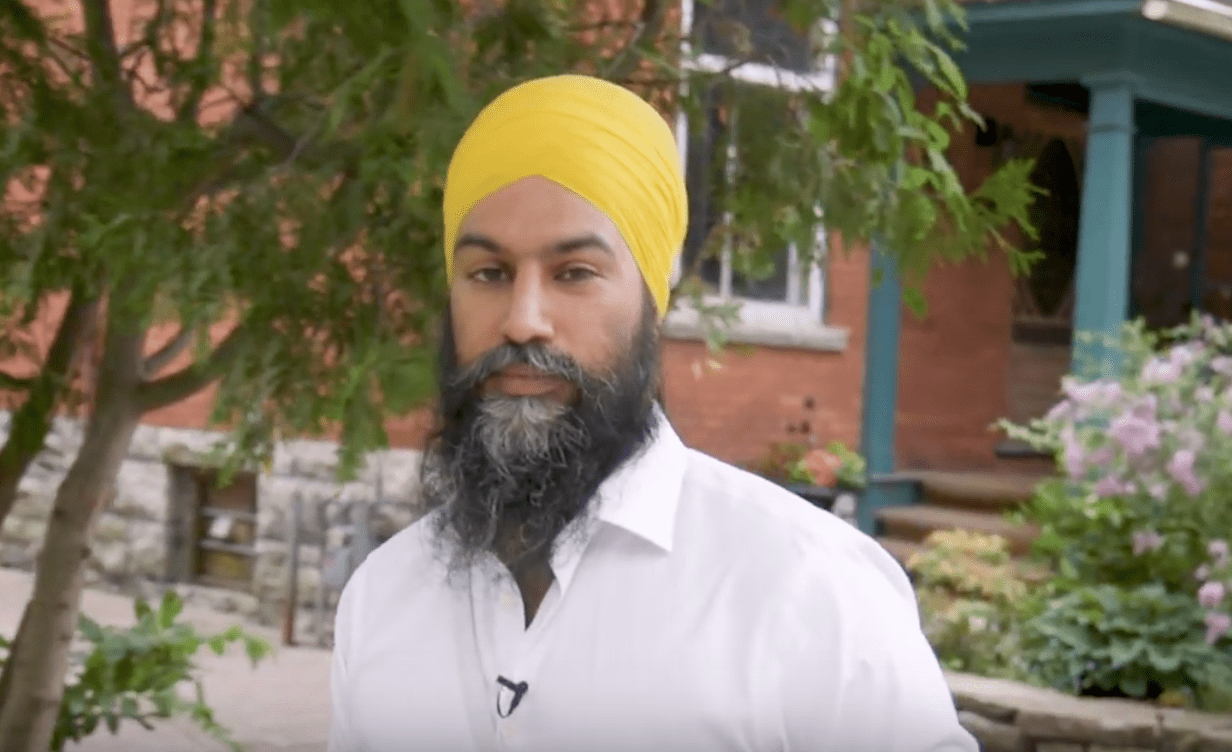 Let's be honest: the NDP election results were awful.  Not as awful as many expected at the beginning of the campaign, that is for sure.  But awful nonetheless.  The worst since 2004, in fact.

Many New Democrats started dreaming of an Orange Wave 2.0 when Jagmeet Singh's personal numbers took off after the official english debate.  Voting intentions followed soon after, poll after poll, and talks of an #UpriSingh were all the rage amongst NDP supporters on social media down the stretch.

But that surge didn't actually materialize at the voting booth.  Yes, there was some bright lights for the New Democrats to smile about.  The NDP is back on the map in the Atlantic, with the return of Jack Harris in St. John's East.  Mumilaaq Qaqqaq, a 25 year old Inuit woman, became the first NDP MP elected in Nunavut in 39 years.  Winnipeg Centre returned to the NDP fold, Leah Gazan defeating Liberal MP Robert-Falcon Ouellette in a significant upset.  Rookie Heather McPherson retained Edmonton Strathcona for the NDP, the only non-conservative MP between Manitoba and the Rockies.

These moral victories are not enough to hide the fact that the NDP is down 20 seats from 2015, after losing over 600,000 votes, or 4% of the vote.  Popular and capable MPs were lost, including Ruth Ellen Brosseau, Tracey Ramsey, Sheri Benson and former leadership contender Guy Caron.  The party fell to fourth place in the House of Commons, behind a resurgent Bloc Quebecois.

In Quebec, the Orange Wave has turned into an orange drop, with New Democrats losing everything they had left in Quebec, except for Alexandre Boulerice, the sole survivor.  No more NDP MPs from Saskatchewan, the cradle of the party.  During the leadership race, Singh's team was touting a breakthrough in the GTA as a selling point.  That breakthrough didn't materialize, neither in the 905 nor the 416.  Even British-Columbia didn't deliver as much as NDP strategists were hoping for, with a net loss of three seats.  And in both PEI and New Brunswick, the Green Party has overtaken the NDP as the third option.

Jagmeet Singh is the first leader in the entire history of the federal CCF-NDP to lose seats after the party did so in the prior election.  In every other case, the party rebounded.

M.J. Coldwell's CCF lost 15 seats in 1949 but got 10 back in 1953.  The CCF lost 17 seats in 1958, which resulted in the CCF merging with the CLC and 11 new seats for the newly formed NDP under Tommy Douglas.  Douglas rebounded again in 1965 after losing two seats two years prior.  Ed Broadbent grew back the party in 1979 after David Lewis resigned, following the loss of 15 seats in 1974.  The same Broadbent lost two seats in 1984 but rebounded with 13 more in 1988.  After the 1993 disastrous results under Audrey McLaughlin, Alexa McDonough brought the party back to life and official status in 1997.  When McDonough resigned after losing seats in 2000, it paved the way for Jack Layton to again increased NDP numbers in the next election in 2004.

Singh supporters are already saying that it took Jack Layton four elections to become the most popular leader in the country and that he too, should be given the chance.  Unlike, say, Tom Mulcair, for whom it was one strike, you're out.  44 MPs were not good enough.

Funny enough, you can find plenty of New Democrats who blame Singh's poor results on Mulcair, somehow, which is a sad way to ignore the failings Jagmeet Singh has shown since he won the leadership in 2017.  Other New Democrats also argue that turfing Mulcair after his first try was a mistake that shouldn't be repeated.  And that 24 MPs are now plenty good.

NDP strategists also believe that Singh's personal popularity rise during the election is a sign of good things to come: the potential is there.  The same potential he showed during the NDP leadership race was back in time for the election.  Too bad he was missing in action for the two years running up to the election.  Singh ran a good campaign, exceeding expectations, especially in the debates.  He looked like he was the only one out there having fun, his social media game was on point and his personal numbers went through the roof.

Yet the name of the game is winning seats and growing the party.  Singh failed on both counts.  Losing not as badly as you thought you would should not be good enough.  However, other leaders also had a difficult election night.  Justin Trudeau lost 27 seats and his majority.  Andrew Scheer won more seats and grew the Conservatives' vote share, but Quebec and Ontario turned their back on him.  The Greens momentum fizzled and Elizabeth May is back in the curtains of the House of Commons.

So as luck would have it, Jagmeet Singh's NDP now has a clean balance of power.  That balance of power, coupled with exceeding expectations, mean that New Democrats are actually quite happy with Singh right now.  Despite the disappointing results, the loss of votes and seats, on paper, Jagmeet Singh has more power in Parliament then he did going in.  Victory!  Let's dance the night away!

But how strong of a hand does Singh actually have to bargain?  Of all the federal parties, the NDP is in the worst shape financially and organisationally.  They would have the most to lose if the Liberal government was brought down in the near future and a snap election was to be called another reason not to enter a leadership race at this time.

Justin Trudeau and his PMO knows this.  Don't assume the Liberals will be pushed around by NDP demands.  There will be no coalition or any kind of formal agreement either.  The Liberals will try to govern alone and drag the NDP along for the ride.  How much of what the Liberals do will Singh be able to take credit for (or be blamed for) will now be his record going into the next election.  Which is just around the corner.