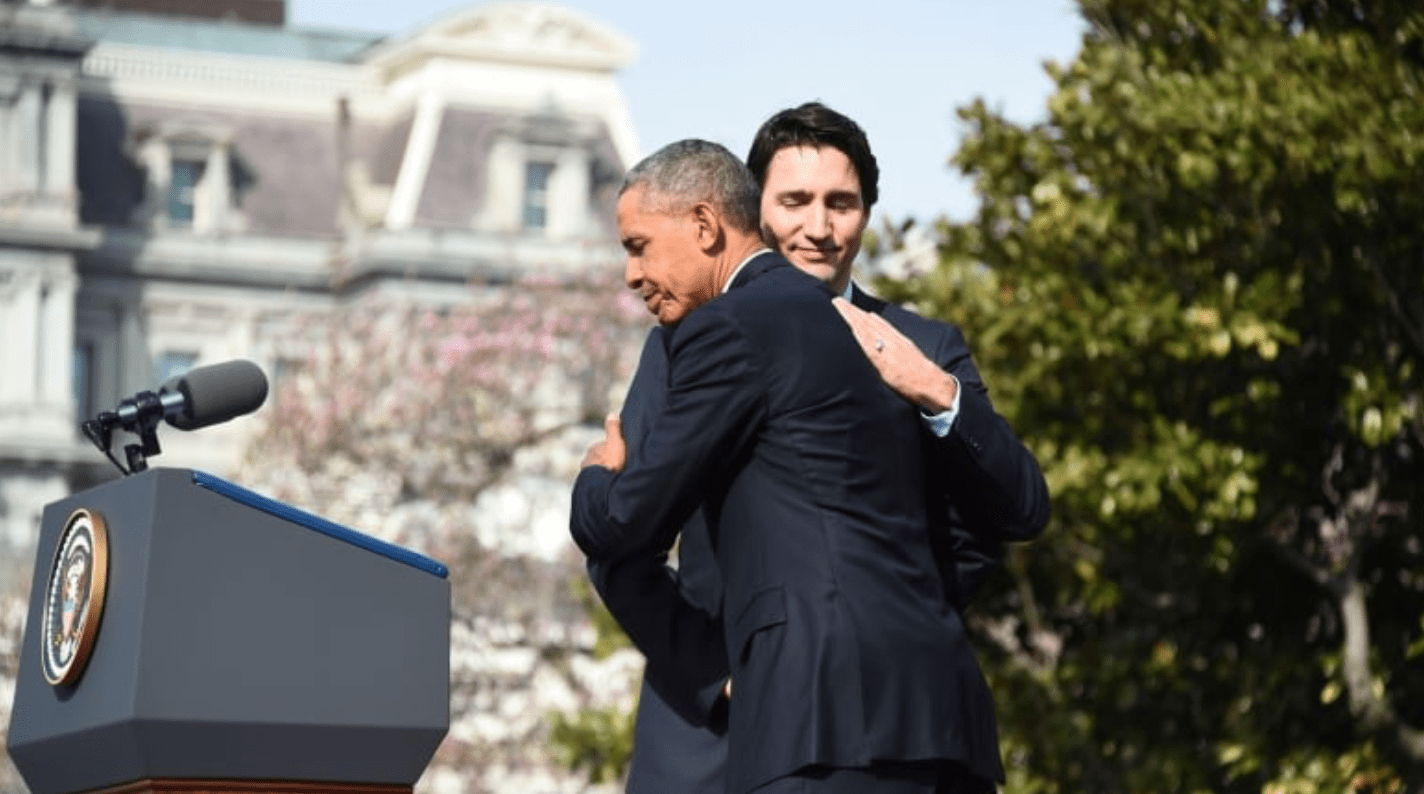 One more weekend and it'll all be over.

Generally, when we talk about foreign influence into domestic elections, we imagine a computer lab full of Russians inventing agitprop about the incumbent party's secret plan to cross-breed humans with earthworms.  Being covert is essential to the concept; being utterly deranged is a plus.  We do not typically imagine an ex-U.S. president sending out a very public tweet praising the Canadian Prime Minister he plainly liked better and nothing else.  And yet.

But non-nefarious intent is not the only reason it is unfair to accuse Barack Obama of wielding excessive foreign influence.  The main reason is because most voters who would let Obama's word sway their decision already support Prime Minister Justin Trudeau.  Those who don't, like many harder-left Democrats, have changed their allegiance to someone of greater ideological purity.  Nobody still on the fence at this point is thinking about what Obama thinks, and nobody off the fence needs to know.

This week in the Vancouver Sun, columnist Daphne Bramham asks why, for all of Trudeau's misdeeds and hypocrisies, voters have not moved his likability points to Conservative leader Andrew Scheer's column.  "He seems like a good-natured, dimpled and smiling Every Man who might be good fun at a Saskatchewan Roughriders football game," she writes, then throws out a series of reasons this isn't mattering: social conservative coziness, problems giving straight answers or taking clear positions, a lack of historical popularity on his own bench.

All of these have merit.  For me, though, it comes down to his undercurrent of discomfort and contempt for anyone who is not a Riders game-going every person as far as he knows.  Remember his introductory ad, in which he positioned "grocery store" Canadians like himself against "cocktail circuit" Canadians like Trudeau?  The electorate is not as simple as Yorkville vs. Mississauga.  Those who live in one may move to the other as their circumstances change.  There is little gain in writing them off until they do.

With no majority government evidently forthcoming, we may find ourselves governed by that most perfectly legitimate and indeed routine of all types of parliamentary governments: the coalition.  As of now, the only likely coalition would be a Liberal-NDP matchup, as leader Jagmeet Singh believes there is at least a chance of swaying Trudeau in the matter of the Trans Mountain pipeline.  His other conditions relate to standard-issue NDP socioeconomic policy but not, notably, government ethics.  This should at least be as high a priority as our cell phone bills.

In the absence of any decent Green Party news this week, let us at last turn to Yves-FranÃ§ois Blanchet and his Bloc QuÃ©bÃ©cois.  Like Quebec Premier FranÃ§ois Legault, Blanchet has decided that if Quebec cannot actually be a country unto itself, it must at least be treated like one, with as much veto power as possible over affairs within its borders.  To that end, he has not only aligned himself as closely as possible to the provincial zeitgeist pardon me, the esprit des temps but made Quebeckers believe he means it, which other leaders, despite their best efforts, have not.

You know what I would like to see?  Give Quebec one year as a provisional sovereign state.  One year to mint their own currency, establish their own military, build their own trade network, oversee their own immigration regime, hang on to their own corporate headquarters if possible, and make their own treaties.  Then they'll either put a sock in it about getting a rawer deal from Ottawa than any other province or they'll make plans to leave for good.  In any case, the rest of Canada wins.

In the Financial Post, columnist William Watson describes People's Party leader Maxime Bernier as wanting to be a "Conservative in a hurry."  His candidates, however, are less so.  Most aspiring MPs post their most embarrassing social media messages between 2005 to 2012 or so.  Nova Scotia candidate Sybil Hogg waited until this very year.  But she will not face consequences for her inefficiency, just a polite reminder to use the word "radical" next time.  Innocent mistake.

This year's election campaign has been nasty.  It's also been, from a polling perspective anyway, relatively uneventful.  While many Canadians may be wishing for it to be over, the real battle of the 2019 election may be what comes in the days and weeks following Oct. 21.

Removing the truly insane predictions like a PPC majority or a Bloc Quebecois-Green coalition government, there are still several scenarios that could emerge after the ballots are counted Monday evening.  Justin Trudeau could win a majority.  So too could Andrew Scheer, though seat projections suggest that will be an uphill battle.  Canadians will most likely be faced with a party that wins a plurality, though not a majority, of the seats in the House of Commons.

If you'll indulge my political geekery for just a moment, it's important to note that winning the election doesn't guarantee you'll get to be prime minister.  It's entirely foreseeable given the anti-Conservative hysteria from the other parties that Scheer could emerge as the apparent victor only to have the Liberals cobble together a formal or informal coalition with the New Democrats, Greens and Blocquistes  or some variation thereof  to stay in power.

It may sound democratic, but this is the very nature of our parliamentary system.  The winner is not whomever wins the most seats, but whomever can command the confidence of the House.

I won't dare make a prediction of what is likely to happen on Monday, but I do think it's worth pointing out just how quickly the knives will come out for the parties' leaders about five minutes after the result is announced.

No one faces a greater risk of this than Trudeau.  Although to a lesser extent than in the 2015 campaign, the entire Liberal apparatus serves to channel the cult of personality around Trudeau.  "Team Trudeau" is branded on most of the Liberal candidates' signs.  The faces of the party  members of the Trudeau cabinet  are all fiercely loyal to Trudeau, at least for now.  Long-time party stalwarts like John McCallum and Stephane Dion had no place within the Trudeau team.  And we all know what happened when Jody Wilson-Raybould and Jane Philpott dared stand up to him, not to mention Celina Caesar-Chavannes.

While this sort of loyalty is no doubt moving, it's rarely long-lasting.  The Ontario PCs seemed fiercely loyal to Patrick Brown as well.  Until he was gone.  If Trudeau is unable to hold together a coalition, he'll cease to be the meal ticket for his caucus and cabinet.  The role of Liberals leader or perhaps even prime minister may fall to a less blemished member of the team.

Jagmeet Singh, despite his youth and formidable campaign style, will face calls for resignation as well.  Though his party has run on a disciplined message that has steered clear of the crazy stuff, it wasn't that long ago that Singh flirted with the boycott Israel crowd and exalted Fidel Castro.  Most of the NDP's moderate members aren't even seeking re-election.  If the NDP is to return to its Jack Layton-esque populism and popularity, Singh will have to go.

And then we get to Scheer.  If Scheer manages to reduce Trudeau to a minority, he'll claim victory.  His supporters will cite the relative rarity in Canada's political history of prime ministers serving only one term.  He'll want another kick at the can.  This is especially true in a minority situation, when opposition parties have to keep their powder dry to pounce at the first available chance for an election.

Remember, the 2011 election came just two-and-a-half years after Stephen Harper's minority win in 2008, which was nearly sabotaged by a Liberal-NDP-Bloc alliance.

But Scheer will also have to own what has by all accounts been a safe and moderate campaign, with little red meat to excite the conservative base on which the party relies for money and volunteers.  This is especially important given the Conservatives were bleeding some support from the right this campaign with Maxime Bernier's People's Party of Canada, whose impact remains unknown at this point.

If the Liberals win anything short of a majority government, they have no excuse to keep Trudeau.  The Conservatives and NDPers will have to reckon with whether the parties Scheer and Singh, respectively, have forged this election are the ones they want to keep.