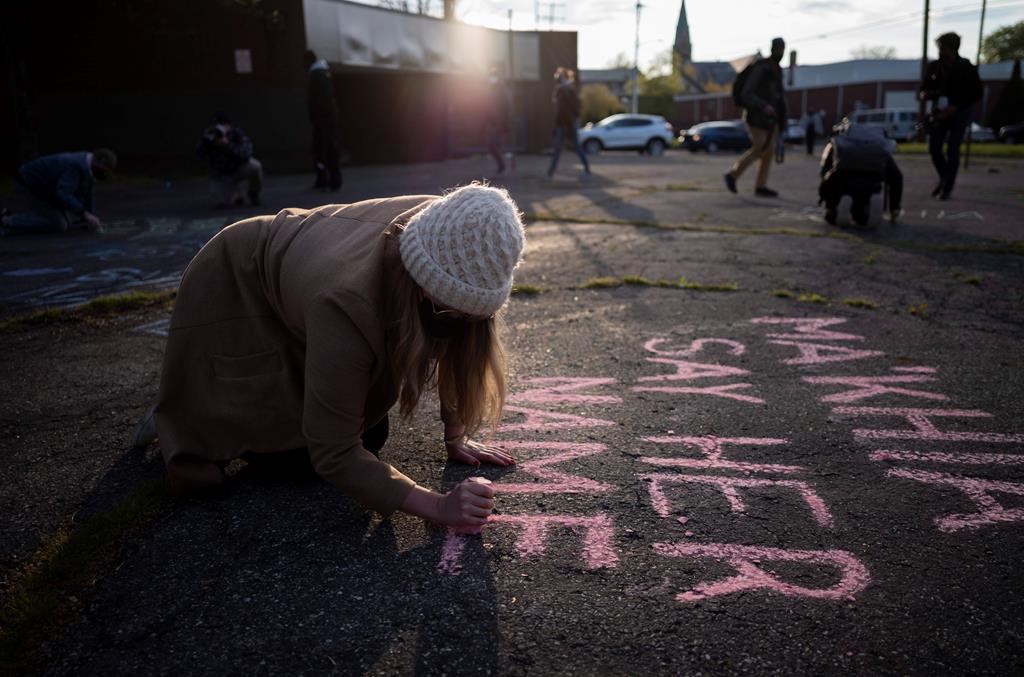 Even as the Derek Chauvin case was fresh in memory â€” the reading of the verdict in a Minneapolis courtroom, the shackling of the former police officer, the jubilation at what many saw as justice in the death of George Floyd â€” even then, blood flowed on America's streets.

And even then, some of that blood was shed at the hands of law enforcement.

At least six people were fatally shot by officers across the United States in the 24 hours after jurors reached a verdict in the murder case against Chauvin on Tuesday. The roll call of the dead is distressing:

A 16-year-old girl in Columbus, Ohio.

An oft-arrested man in Escondido, California.

The deaths, in some cases, sparked new cries for justice. Some said they reflect an urgent need for radical changes to American policing â€” a need that the Chauvin verdict cannot paper over. For others, the shootings are a tragic reminder of the difficult and dangerous decisions law enforcement face daily.

An unidentified man in San Antonio.

Another man, killed in the same city within hours of the first.

A 31-year-old man in central Massachusetts.

The circumstances surrounding each death differ widely. Some happened while officers investigated serious crimes. Police say some of the people were armed with a gun, knife or a metal pole. One man claimed to have a bomb that he threatened to detonate. In several cases, little is known about the lives of those killed and what happened in their final moments.

The deadly encounters are only a small snapshot of the thousands of interactions between American police officers and civilians every day, most of which end safely. Uneventful encounters between the police and the populace, however, are not an issue.

It's a very different story when a weapon is drawn and a life is ended.

As the nation watched the judge read the verdict against Chavuin on Tuesday afternoon, an officer hundreds of miles away was listening over his patrol car radio in a neighbourhood in Columbus, Ohio. Minutes earlier, a colleague fatally shot a teenage girl.

Police had been called to the house after someone called 911 and reported being physically threatened. Body camera footage shows an officer approaching a group of people in the driveway as the teenager, Ma'Khia Bryant, swings a knife wildly. Moments later, the girl charges at a young woman pinned against a car.

The officer fires four shots before Bryant slumps to the ground. A black-handled blade, similar to a kitchen or steak knife, lies on the sidewalk next to her.

"You didn't have to shoot her! She's just a kid, man!" a man shouted at the officer.

The officer responds, "She had a knife. She just went at her."

Later, an anguished neighbour yells at officers: "Do you see why Black lives matter? Do you get it now?"

Bryant, who was in foster care at the time, was a shy, quiet girl who liked making hair and dance videos on TikTok, her grandmother, Debra Wilcox, told The Associated Press. Her family says her actions that day were out of character.

"I don't know what happened there unless she was fearful for her life," Wilcox said.

Though officials have said Bryant's death was a tragedy, they point to laws allowing police to use deadly force to protect themselves and others.

The officer's actions were "an act of heroism" with tragic results, said the National Fraternal Order of Police president, "yet another demonstration of the impossible situations" police face.

About the same time the radio brought the news of Chauvin's verdict to Columbus, two officers in San Antonio were confronting a man on a bus. Exactly how the encounter started remains unclear, but police say the unidentified man was armed. It ended with officers firing fatal shots.

Later that evening in the same city, authorities say a man killed a person working in a shed outside his home. As officers arrived, the suspect started shooting at police. They returned fired, killing him. Officials have not released his name.

As the nation digested the news from Minneapolis, the day wore on and daily life unspooled. In Worcester, Massachusetts, the night was punctuated by a standoff with police that ended in gunfire.

Phet Gouvonvong, 31, called 911 and claimed to have a bomb he threatened to set off, police said. Officers found him on the street. They said he was wearing body armour and had a backpack and what appeared to be a rifle.

A police SWAT team joined negotiators. One reached Gouvonvong by phone to try to calm him, officials say.

Around midnight, officials say, Gouvonvong moved toward police, and an officer opened fire.

Gouvonvong was pronounced dead at the scene. Police have not said whether he actually had an explosive device.

Gouvonvong had run-ins with police over the years, including a conviction for assault and battery with a dangerous weapon, but an aunt said he turned his life around, the Telegram & Gazette newspaper reported.

On Thursday, his mother crumpled onto the street in tears where flowers had been laid at the site of his killing. Marie Gonzalez told the newspaper she had called police Tuesday night to try to connect with her son but they wouldn’t put her through. She believed she could have prevented it.

The next morning, as people in Minneapolis awakened to a city boarded up for unrest that never materialized, a 42-year-old Black man in eastern North Carolina was shot and killed when deputy sheriffs tried to serve drug-related search and arrest warrants.

An eyewitness has said Andrew Brown Jr. was shot dead in his car in Elizabeth City as he tried to drive away. A car authorities removed from the scene appeared to have multiple bullet holes and a shattered back window.

His slaying sparked an outcry as hundreds demanded the release of body camera footage. Seven deputies have been placed on leave.

Relatives described Brown as a doting father who always had a joke to tell. He also had a difficult life. His mother was killed when he was young, he was partially paralyzed on his right side by an accidental shooting and lost an eye in a stabbing, according to an aunt, Glenda Brown Thomas.

He also had troubles with the law, including a misdemeanour drug possession conviction and some pending felony drug charges. The day before he was killed, two arrest warrants were issued for him on drug-related charges including possession with intent to sell cocaine, court records show.

Officers have so far said little about why they fired, but his family is determined to get answers.

"The police didn't have to shoot my baby," said another aunt, Martha McCullen.

That same morning, police in Southern California got a call about someone hitting cars with a metal pole. The man ran off when police arrived, but another officer spotted him carrying a 2-foot metal pole in the street.

The white man charged at the officer, who ordered him to drop the pole before opening fire, police said.

Police in Escondido, near San Diego, have not released the man’s name, but did say he had been arrested nearly 200 times over the past two decades for violent assaults on police and the public, drug charges and other crimes. Efforts to get him help from mental health professionals hadn't worked, the police chief said.

Whether any officers will face charges in these shootings remains to be seen.

Chauvin was largely convicted based on video that showed him pressing his knee into Floyd's neck for more than nine minutes. Police shootings in a heated moment are notoriously difficult to prosecute. Juries have generally been reluctant to second-guess officers when they claim to have acted in life-or-death situations.

In the aftermath of Tuesday's verdict, prosecutors on opposite coasts announced opposite decisions on whether to advance charges against law enforcement who killed.

None of these cases has focused attention like the trial that came to a conclusion Tuesday. Some people hold out hope that the Chauvin verdict might be a crucial juncture in the national conversation about race, policing and the use of force.

"We are in a moment of reckoning," said Rachael Rollins, district attorney for Boston and surrounding communities and the first woman of colour to serve as a top county prosecutor in Massachusetts.

"If we can be strategic and come together," she said, "we can make profound changes, profound."

Associated Press writers Michael Kunzelman in College Park, Maryland, Jill Bleed in Little Rock, Arkansas, Julie Watson in San Diego and Juliet Williams in San Francisco contributed to this report, as did Farnoush Amiri in Columbus, Ohio. Amiri is a corps member for the Associated Press/Report for America Statehouse News Initiative. Report for America is a non-profit national service program that places journalists in local newsrooms to report on undercovered issues.